Divers from the European conservation organisation The Black Fish have last night cut the nets of six holding pens in Taiji, Japan, that were holding dolphins caught during a dolphin drive hunt a few days earlier. During this hunt a number of dolphins were selected for the international dolphinarium trade and transferred to these holding pens. In rough weather conditions the divers swam out and cut the nets of six of these holding pens, allowing a number of dolphins to swim back out to sea. No arrests were made. 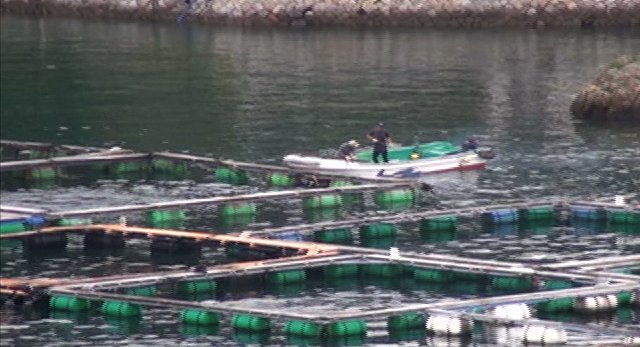 Every year, between September and April, the sea around the fishing village of Taiji on the east coast of Japan turns red as it becomes the scene of one of the biggest mass slaughters of marine wildlife in the world. The dolphin drive hunt, which recently made global headlines through the Oscar winning documentary 'The Cove', is responsible for capturing and killing over 2,000 dolphins of Japan's annual quota of 20,000. Fishermen drive the dolphins from sea into a cove, where some animals are selected for dolphinariums while the others are killed for their meat.

The Black Fish and other marine conservation and animal welfare organisations run ongoing campaigns to push for the closure of the remaining dolphinariums in Europe, where some of the dolphins caught at Taiji inevitably end up. Dolphinariums are already banned in United Kingdom. The Black Fish believes that it is unacceptable to keep dolphins, orca's and other marine wildlife in captivity, given the vast areas which these animals normally inhabit, the miserable and squalid conditions under which they are often kept and the stress that public performances put on them.

Co-founder of The Black Fish, Wietse van der Werf, explains their decision to intervene: "The connection between the dolphin entertainment industry and this annual drive hunt can no longer be denied. To be successful in our campaigns in Europe we need to get to the root of this illegal trade, which is right at Taiji."

The Black Fish is aware of the sensitivity surrounding the hunt at Taiji this year. With an international media spotlight on the Japanese dolphin hunts, tensions within the country have heated up and Japanese nationalists have seized the opportunity to defend this 'traditional' activity. While we acknowledge that change also needs to come from within Japanese society, we vow to continue to work for the protection of these defenceless dolphins and push to make dolphinariums and the drive hunts which supply them history.