We are squatters from the Netherlands. We are asking you to join us in our struggle against the squatting prohibition. We will have two demonstrations this week, on 1st October in Amsterdam and 2nd October in Nijmegen. This week mayor of Amsterdam said that in coming months 200 squats will be evicted in the city!!! If you can not come to the Netherlands please organize a protests or action in your place against the squatting prohibition that starts on 1st October 2010. 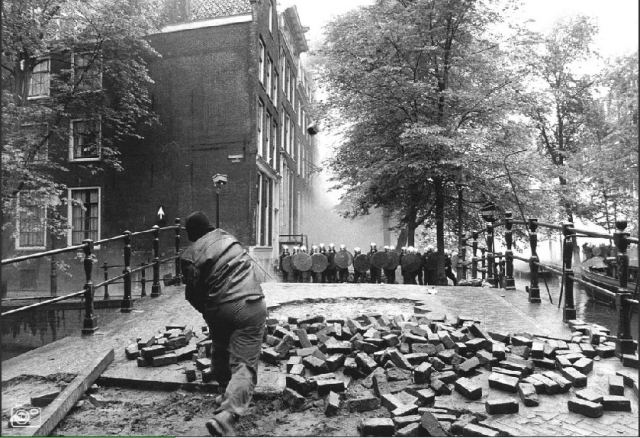 Demo in Amsterdam on 1st October:

Demo in Nijmegen on 2nd October (english text in the second comment):


Call out of "Spirit Of The Unity" Collective:

As you probably might know dark days are coming for the squatting movement in the Netherlands. The Dutch parliament voted for a squatting prohibition. From 1st October 2010 squatting will be illegal in the Netherlands. It means that people who try to occupy an empty building, will be considered a criminal and will be punished by dutch authorities. Penalties are very high and range from one year up to two years and eight months of prison! Please remember this would not have happened without the support of racist and xenophobic politician Geert Wilders.

This is very serious threat! Don't let politicians destroy squatting movement in the Netherlands! We can't wait! We must act now!

The future of the dutch squatting movement is in our hands. It is a big responsibility as well. We should show respect to those previous squatting generations who made squatting possible in the Netherlands. They sacrified a lot of time and energy for us. We should think about all the youth who would like to have the possibility to live in squats in the future.

Mass media and politicians say that we are few, but our spirit is stronger then this rotten and unhumane law that politicians have created! We are willing to show politicians and police forces our determination in the defence of our rights for housing. There is lack of cheap houses in the Netherlands. For example in Amsterdam price of renting one small room range from 300 till 550 euros a month!

Mass media and politicains say that we are violent, but those christians from CDU (Christian Democratic Party), CU (Christian Union) and SGP (Orthodox Protestant Party) are violent. For them empty buildings are more important than human beings searching for a house. Those christians decided that police will come to arrest us, if we try to occupy a house after 1st October 2010.

We are proud of who we are and we are willing to defend our rights to occupy empty buildings. We won't give up without struggle! Some of you remember those proud and angry youth from Kopenhagen who were fighting for Ungdomshuset and dignity. Some of you probably have joined the struggle. If will be necessary, we are willing to bring the spirit of youth from Denmark and Greece to our streets!

Politicians did not leave us another choice! From 1st October 2010 we have to choose between being homeless or criminals. This choice is not suitable for us! We won't live on the streets or in the prison! We are human beings and we deserve respect! We will fight for our dignity!

There is few hundreds squats in the Netherlands. We can't afford to lose this enormous infrastructure! There are houses, autonomous centers, places for cultural activities. In all those buildings we live and/or practice and promote our political ideas. We use that space to promote independent art and underground counter culture in opposition to mainstream pop culture and art.

Let us be a bit sentimental. For many of us to be a squatter is way of life. A lot of us spent the best times living in the squats. We had unforgettable adventures together. We have plenty of invaluable experiences, like living in self-organized communities or housing collectives. Many of us met their best friends in the squats. Yet another reasons to struggle against the squatting prohibition.

Don't ignore serious threats for squatting movement in the Netherlands! Use your imagination, open your eyes, stand up and act!

Our struggle is for a world without capitalism, race and gender differences, poverty and war!

We are going to be very thankful for all your support. Solidarity is our weapon!

"Spirit Of The Unity" Collective.

"Spirit of the unity" collective