Violence, murders and pogroms: These expressions of a right-wing attitude, which has long been officially believed defeated, are flourishing.
Violence against Sinti and Roma, anti-Semitism, racism, and homophobia is accepted silently by major parts of our society and the state. 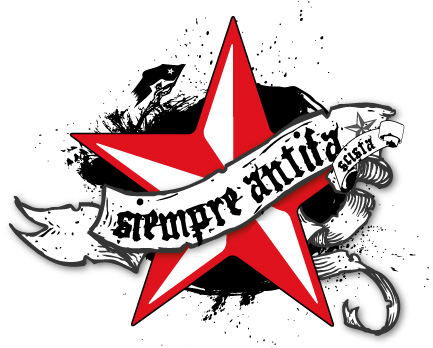 Use the logo - always antifascist!

Nationalistic and legal-populist ideologies and trends move European societies far to the right. For those unable or unwilling to follow (on account of their social or geographic origin as well as on their sexual or political orientation) the swing to the right means potential dangers to their physical existence.
The radical right-wing movements in Europe and all around the world are prophesying a “race war” as well as a “cultural war” and link up themselves increasingly.
International collaborations under the banner of a so-called “Ethno-Pluralism” and a “Europe of native countries” strengthen neo-fascist structures, comradeships and parties.
The attempt of radical right-wing European parties to form a fraction in the European Parliament points out the real dangers of the interlinking and collaboration of radical right-wing parties like front National (France), Tricolore (Italy) and Partidul Romania Mare (Romania).

By any beat necessary!

Neo-fascist musical networks like “Blood and Honour” and their legal substitute network “Honour and Pride”, as well as the world wide operating “Hammerskin Nation”, organize concerts with far-right musicians to politicize youth for the “white resistance”.
Concerts that have recently been taking place in the border regions between Germany, Poland and the Czech Republic as well as between Belgium and France, are the germ cells of militant neo-fascism and furthermore provide formative experiences for a youth easy to politicize. These events have contributed to so-called “Autonomous Nationalists” being now a global phenomenon.
In Czechia, local neo-fascists spreading racist and nationalist propaganda have nearly perfectly infiltrated alternative youth cultures. Their offer is a right-wing alternative to almost all spheres of life. Be it Reggae and Ska, Electronica, Hip-Hop or the classical neo-fascist „RAC (Rock Against Communism)”.
Events like the “Fest der Völker” in Thuringia, the nazi-demonstration in Dresden to mind the bombing of the city during World War II or the “Day of Honour” in Budapest are being set-up to attract neo-fascist from all over Europe. These events provide the platforms which the European neo-fascist scene is manifesting itself on in an increasingly mobile and militant manner.
In November 2008, German neo-fascists took place in pogroms against Sinti and Roma in Litvinov (Czech Republic) to practice “national solidarity”. Also, Nazis all over Europe are supporting and showing solidarity with the murderer of Carlos Palomino. Carlos was stabbed to death in the name of a “white Europe” by right-wing militaries on 11th of November 2007 in Madrid. Over the last years, fatal nazi-violence against political and ethnicified enemies has been steadily increasing. In the global context, violence against antifascists, migrants and religious foes, is increasing each year. In Russia alone, at least 71 people have been killed by neo-fascists in 2009 [1].
In many East European cities there has been a self-confident radical right constituting itself; not as a fringe group but as deeply entrenched part of mainstream society. The “Hungarian Guard Movement” is a nationally operating civil weir of the national-socialist “Jobbik” party fighting against the putative crimes of the Sinti and Roma. Armed right-wing and neo-fascist militias are training in the Ukraine and in Russia for the seizure of power. Fascists commit terrorist attacks on migrants from the Caucasus area and mobs consisting of police men and citizens in joint action attack Gay Parades (e.g. in Moscow, Warsaw and Budapest).
The permanent crisis of capitalism causes, as usual in times of the fear of social descend identity crises. A (radical) right which devotes itself increasingly to social questions and offers simple explanation patterns and solutions, finds a fertile ground in a majority population already threatened by poverty. As long as this permanent situation of crisis is not abolished, the horror will not stop. A strong anti-fascist movement has the duty and responsibility to fight against the roots of the problems!

We, the radical anti-fascist left, do not watch these developments passively! Exchange, interlinking and cooperation is necessary. This applies to the local level, the regional level as well as the international level. The anti-fascist movement must overcome language barriers and state borders. This is why from the 12th to the 14th November there will be held an international antifascist conference under the slogan “Siempre Antifascista – Remembering meand fighting” in Berlin. We will be discussing problems and solution attempts against neo-fascist violence together with advisers from different parts of Europe.

The weekend after will be dedicated to subcultures. We are happy to practice antifascism during the Festival „Siempre Antifascista 2010“. During the day, the antifascist “Silvio Meier Demonstration” will take place in Berlin. A strong youth movement needs fire. In the afternoon we will keep the memory of Silvio Meier alive and fight against local Nazi and in the evening the international antifascist festival will take place. Come to Berlin and link up with other antifascist. For a strong antifascist movement capable of acting against the fascist sum – everywhere! In addition to that, there will be an international mourn and remembrance day on the 11th November 2010. Remember the victims of right-wing violence. No one is forgotten!

Remembering means fighting – no victim of fascist violence will be forgotten. Fight your local nazi structures!

Siempre Antifascista needs You! Siempre Antifascista is following a decentral concept. Act against right-wing structures and remember the victims. Last year, on the 11th of November there have been taking place antifascist actions in Madrid and many Ukrainian cities. Fascist structures have to be attacked, no matter if they exist in villages, on the countryside or in big cities. Be it your sister, be it your brother, be it your cousin or your uncle or your lover…Be creative and produce and spread stickers, posters, pamphlets, wall pictures or stencils, banners and demonstrations! No victim is forgotten, no fascist is forgiven! Remember and fight…always remember: legally, illegally, no one cares!