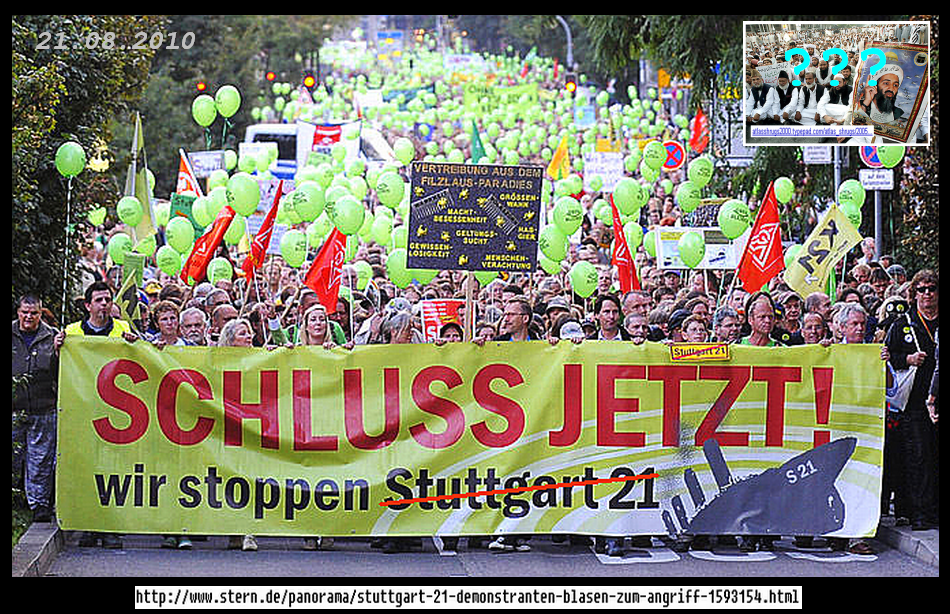 For those who don't understand German:

"Radical left-wing groups" used as an excuse to justify state violence? Why not just say Al-Qaida? ... Baden-Wurtenberg department of homeland security claimed, after violent clashes took place between police and opponents of the train station project on Thursday, that radical left-wing groups had taken part in the demonstration. The president of the regional authority of homeland security, Beate Stube, explained in the current affairs magazine 'Focus', "that left-wing extremists groups like the youth section of the 'Left-Wing Party', the left-wing youth group 'solid' and the trotzkyist orientated Socialist Alternative (SAV) are taking part in the 'Youth Offensive against S21'."

This group applied for permission for the youth demonstration. According to Homeland security employee Bube, parties from the "extreme left political spectrum have been trying to exploit the protest for their own purposes." They want to make use of a latent "discontent within the population" and associate it with criticism of the existing political system. According to Bube, these groups haven't been successful in spreading the influence yet, that they had hoped to achieve within the wide coalition in the struggle agains Stuttgart 21. ... More

http://weltereignisse.blogspot.com/2010/10/linksradikale-gruppen-als.html ... To all intents and purposes, one had to ask oneself where the agent provocateurs at Stuttgart 21 were. At the latest, when the "Back Block" turns up, your peaceful demonstrator knows that it's 'no laughing matter' any more. Images of smashing windows and setting cars alight will haunt our TV screens again. And Joe Public will once again show understanding for the use of batons and tear gas. The alledged 'radical left-wing groups' are merely the beginning of a to be feared larger campaign.