A thousand EDL supporters rampaged through the streets of Leicester on Saturday (9th), attacking locals, anti-fascists and police. 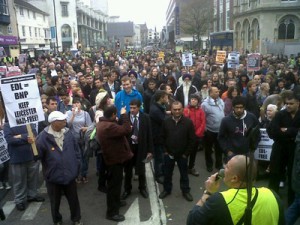 Over 2,000 police from 13 forces were waiting to corral the EDL and the 700 UAF counter-protesters into opposing pens, separated by police and three-metre steel fences. The leaguers immediately began to hurl bottles, cans, bricks and coins at police and the UAF.

Despite their numbers, the police struggled to contain the frothing thugs and three times they burst through police lines and poured out onto the streets. With around 200 breaking loose, packs of EDL staggered through the city, sporadically clashing with local black and Asian youths.

One group of EDL supporters smashed the windows of a fast-food restaurant before kicking open the door and threatening the families eating inside. Another group attacked the International Arts Centre Fabrika, smashing the windows and trying to break into the building as staff fled through the back door.

Police arrested 17 leaguers and there were a number of injuries, including one police officer who suffered a broken leg in a skirmish.

The police rounded up the feral fash before they managed to force their way into Asian and black estates, where, in a number of areas, the residents were waiting. When rumours circulated that the EDL were headed for the Highfields estate, hundreds of residents assembled outside the African Caribbean Centre to defend their neighbourhood.

Anti-fascist opposition in the city centre however, was limited and the local youths on the streets were, for the most part, chased away.

*Before the demo began, around 10 EDL coaches had stopped in nearby Market Harborough. The flash-mob of around 500 EDLers was cordoned off by 100 police. After about an hour and a half, bored of the kettle, they got back on their coaches and turned back.