Deportation death raises questions over 'proportionate force'
In the interest of justice there should be with out a shadow of doubt an immediate 'independent' enquiry into the circumstances surrounding the unacceptable death of Jimmy Mubenga. If left to the powers that be, any investigation will be (if there is one) a long time coming, years not months and not independent.

Further, the government have announced the abolition of the office of the Chief Coroner (before it was even established), which could and would have afforded proper investigations into deaths like these. 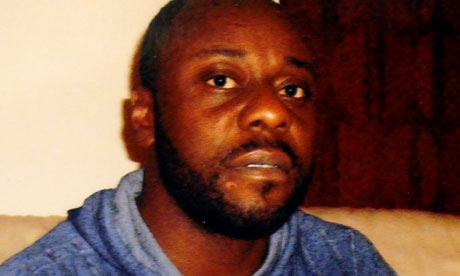 Whatever happened on flight BA77 on Tuesday night, the death of Jimmy Mubenga is likely to place a spotlight on Britain's deportation techniques. The 46-year-old is thought to be the first person to have died in the process of being deported for 17 years.

[ Positional asphyxia
Positional asphyxia, which occurs when someone's physical position prevents them breathing, has led to a small but significant number of sudden deaths under restraint by police or prison officers.

The prison service warns staff of a common misconception that if an individual can talk they can breathe. "An individual dying from positional asphyxia may well be able to speak or shout prior to collapse," states the HM prison service order.

The Metropolitan police which overhauled its restraint guidelines after the unlawful death by positional asphyxia of Roger Sylvester (above) in 1999, says restraining a person in a position that compromises their airways can lead to asphyxiation. They add that forcing the head down towards the knees is particularly dangerous: "Restraint where the subject is seated requires caution, since the angle between the chest wall and lower limbs is already decreased." Alan Travis ]

Deportation death: 'Jimmy Mubenga was a good man'
Jimmy Mubenga's wife tells of how devoted family man battled for years to resist deportation back to Angola

Jimmy Mubenga spoke to his wife of more than 15 years for the last time from his seat between two private security guards at the back of BA flight 77 at Heathrow airport on Tuesday evening. The 46-year-old Angolan, who had been fighting an increasingly desperate battle to stay in the UK for the last four years, had been allowed to make one last call as he waited for the plane bound for Luanda, in Angola, to take off. "He was so sad, he was saying: 'I don't know what I am going to do, I don't know what I am going to do,'" his wife, Makenda Kambana, told the Guardian today. "Then he said: 'OK, just hang up and I will call you back'... but he never did call back."

Mubenga, who was pronounced dead less than an hour later, had been in the UK for 16 years.

Security guards accused over death of man being deported to Angola

[ If you go to the Guardian page, there is a audio eyewitness report ]

A man who died while being deported to Angola was being heavily restrained by security guards and had complained of breathing problems before he collapsed, a witness has told Guardian.

Jimmy Mubenga lost consciousness while the British Airways flight was on the runway at Heathrow on Tuesday night. The commercial flight was cancelled and Mubenga was taken to hospital, where he was pronounced dead.

There are 11 immigration removal centres across the country, most of which are operated by private security companies