Don't push Jews into the arms of fascists

Why would Tony Greenstein push Jews into the arms of the EDL, it will only help the EDL and increase anti-semitism and islamophobia. It is disgusting! 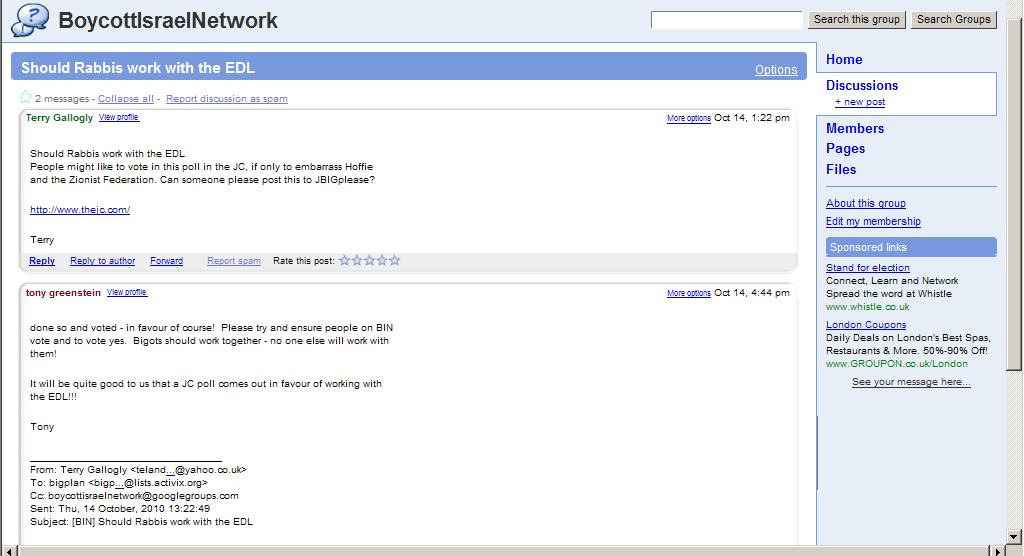 On 24th October a right wing American rabbi is going to speak at a demonstration by the fascist EDL at the Israeli embassy in London. This is bad enough but it seems that one so-called anti-fascist is quite happy at the idea.

The Jewish Chronicle has an online poll asking if rabbis should work with the EDL and astonishingly Tony Greenstein sent an email to the Boycott Israel Network group saying that he had voted yes, and that everyone in the group should do the same because "It will be quite good to us that a JC poll comes out in favour of working with the EDL!!!"

I am so gobsmacked by this that I have pasted a screenshot of his email because it is so outrageous I would not blame anyone for not believing me. We all know that the EDL have Jewish supporters but this is something that all anti-fascists and anti-zionists should be trying to discourage, to do the opposite is disgusting. It will push more Jews into the arms of the EDL and encourage others to support the EDL if they see that Jews do.

It will increase hostility between Jews and Muslims when we should be working to bring them together as allies against the fascists. What kind of Jewish anti-fascist does something that will increase anti-semitism and islamophobia in this way?

Plus it is downright dishonest, we do not need to fake evidence to prove that we are right, it makes us look stupid and untrustworthy and discredits our cause. How Tony thinks this helps the Palestinians or protects Muslims from the fascist EDL I have no idea but I want no part of it.