Detainees in Dover immigration detention centre have issued a statement demanding an official investigation into the death of fellow detainee Jimmy Mubenga, who died during his forcible deportation on a British Airways flight to Angola on 12 October.

Three G4S security guards are accused of having caused his death as witnesses told how the 46-year-old man was being "heavily restrained by security guards and had complained of breathing problems before he collapsed." [1] The three men have since been questioned by police and bailed until December pending further inquires. 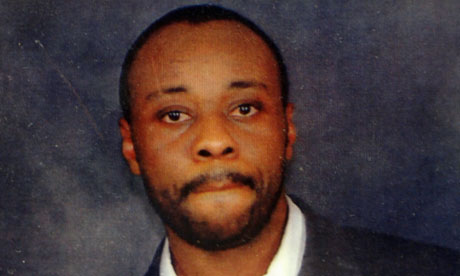 The statement, so far signed by over 25 of the detainees, also demanded that "all those responsible for this brutal crime at the UKBA, G4S and British Airways are held responsible and punished accordingly."

Detainees in other detention centres around the country are said to have been disturbed by the news and many said they fear that the same might happen to them when they are "deported in the caring hands of G4S."

According to campaigners, detainees in various detention centres started to organise mass protests but these soon died out as many feared "management's retaliation."

This is not the first time that news of the use of excessive force by private security guards during deportation operations have surfaced. In
2008, a report by Birnberg Peirce & Partners, Medical Justice and the National Coalition of Anti-Deportation Campaigns documented "an alarming number of injuries" sustained by asylum seekers at the hands of private security guards contracted by the Home Office during their detention and forcible deportation. [2] An independent report by Baroness Nuala O'Loan, the former Northern Ireland police ombudsman, found in March that security contractors involved in deportations had "failed to properly manage the use of violent restraint techniques by their staff." More recently, research by the Institute of Race Relations revealed that at least 14 people have died since 1991 during forced deportations from various European countries, including the UK. [3]

One of the Dover detainees, who preferred to keep anonymous, said: "This is not the first time this happens and we know what happens with
this kind of 'investigations' promised every time by the Home Office. We want a proper, independent investigation that holds all those responsible for Jimmy murder to account, not just the three security guards."