US troops and Iraqi torture

US troops ordered not to investigate Iraqi torture ........ United States troops were told not to investigate allegations of torture by Iraqi security forces, according to documents found in the war logs. A comprehensive trawl of the secret military files show that US soldiers witnessed, or were told of, more than 1,300 cases of detainee abuse by Iraqi authorities. But following the Abu Ghraib scandal of 2004, they were given explicit orders not to investigate unless coalition personnel were involved.
The logs reveal that more than 180,000 people were detained in Iraq between 2004 and 2009. This is equivalent to one in 50 of the male population. In comparison, the number of people detained in Afghanistan, which has a similar population, was 7,500. Most of those detained in Iraq detentions were in state-run centres. ..... 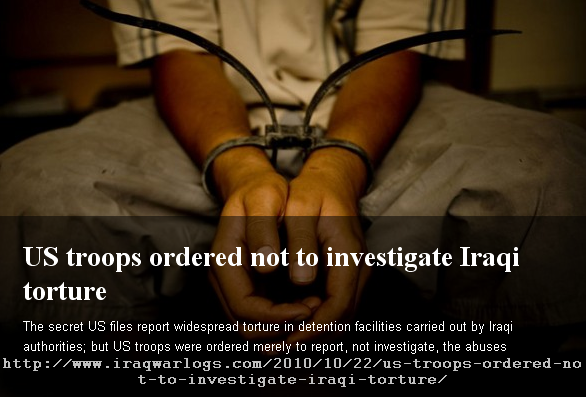 http://www.iraqwarlogs.com/2010/10/22/us-troops-ordered-not-to-investigate-iraqi-torture/ ..... Top stories: US Apache guns down surrendering insurgents
The US military cleared an Apache helicopter gunship to open fire on Iraqi insurgents who were trying to surrender according to a report

http://www.iraqwarlogs.com/2010/10/22/us-commits-%e2%80%9cwar-crime%e2%80%9d-as-apache-helicopter-cleared-to-gun-surrendering-insurgents/
Hundreds of civilians gunned down at checkpoints

http://www.iraqwarlogs.com/2010/10/22/more-than-600-civilians-killed-in-error-by-coalition-forces-in-iraq/
Coalition forces killed hundreds of civilians, including children and families, as checkpoint procedures failed, according to the war logs
The secret US files report widespread torture in detention facilities carried out by Iraqi authorities; but US troops were ordered merely to report, not investigate, the abuses
Obama administration handed over detainees despite reports of torture

http://www.iraqwarlogs.com/2010/10/22/obama-administration-handed-over-detainees/
The Obama administration handed over thousands of detainees to the Iraqi authorities in the full knowledge that torture is rife throughout Iraqi detention facilities
More Top stories...
The Iraq war logs
Pentagon response to publication of the war logs

http://www.iraqwarlogs.com/2010/10/22/pentagon-response-to-publication-of-the-war-logs/
The Pentagon responds to the Bureau's findings
The War in Numbers

http://www.iraqwarlogs.com/2010/10/22/the-war-in-numbers/
The details in the Iraq War Logs are shocking, but the numbers are revelatory.
Tales of war
Iraqi civilians used as minesweepers by a US soldier