This past Wednesday students, residents and activists protested across Southampton over both the presence of Arms companies at a University careers fair and the Coalition government’s imminent cuts with a well attended demo at the Bargate. 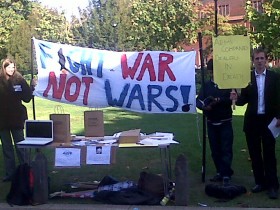 On the Highfield Campus of the University of Southampton ]students from the Amnesty, Socialist and Green Action student groups opposed the presence of arms companies at the IT, science and engineering graduate fair by setting up a picket outside. The fair, which could have been a varied diverse group of companies but was dominated by eleven arms companies including such notorious companies as BAE Systems and Lockheed Martin (as opposed to only a few relating to the environment, for example), was held in the University’s Garden Court due to the student union’s ban on arms companies on its premises (although last year SUSU apparently forgot this and let the fair with those companies in). The campaigners held a stall outside the fair for potential employees to pass on the way in, with a prominent banner, placards and leaflets explaining the issues surrounding arms companies and in particular BAE Systems as part of CAAT’s wider Ban BAE campaign. The stall was well attended and popular with passers-by, with hundreds of leaflets handed out over the day.

Others (some from the stall and some persuaded on the way in) hassled the arms stalls directly by asking them difficult questions about their lack of ethics and indiscriminate weapons selling, and in the case of E.on by pointing out their greenwashing of their environmental credentials in the light of being the second biggest CO2 emitter in Europe and planning a wave of new coal-fired power stations.

Several campaigners managed to go further and actively anti-recruited in the fair – with questions such as “Hi there, would you like to not work for this company?” aimed at potential recruits whilst giving out leaflets – and managed to stem the flow of potential employees to Lockheed Martin for around half an hour and also intercepted people heading for stalls for BAE Systems and AWE. After an hour or so University security, backed up with 2 police officers and a PCSO, asked the anti-recruiters to leave (or be made to leave), at which point they elected to do so and rejoined the demo outside.

Meanwhile, later on in the day a large protest at Bargate convened by Southampton United for Public Services (SUPS) was held to rally against the spending cuts announced by the Coalition government. Protestors included many public sector workers such as firefighters, teachers and librarians whose jobs and services are threatened by the cuts, as part of a wider set of protests across the UK. As a result of the national cuts announced on Wednesday, public sector workers will now face pay freezes or have their pension at risk, and up to 500 jobs are in the City Council’s firing line on top of 180 announced already so far this year. Hundreds of people turned up to support the protest and to express their concern over the Chancellor George Osborne’s cutbacks, and organisers promised that this and other protests nationwide are the start of a campaign to oppose the severity and hastiness of the proposed national cuts.