Peace oil or taking the piss?

Peace Oil sold and promoted by Card Aid does not appear to be quite what is claimed. 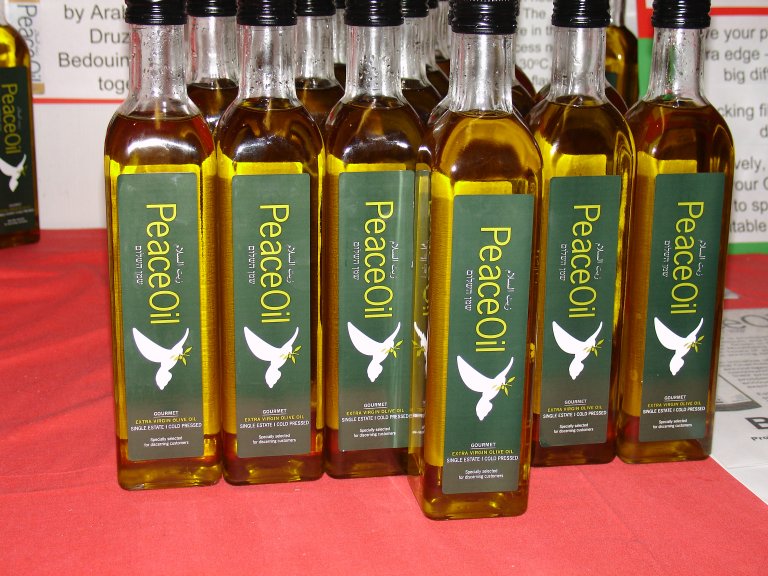 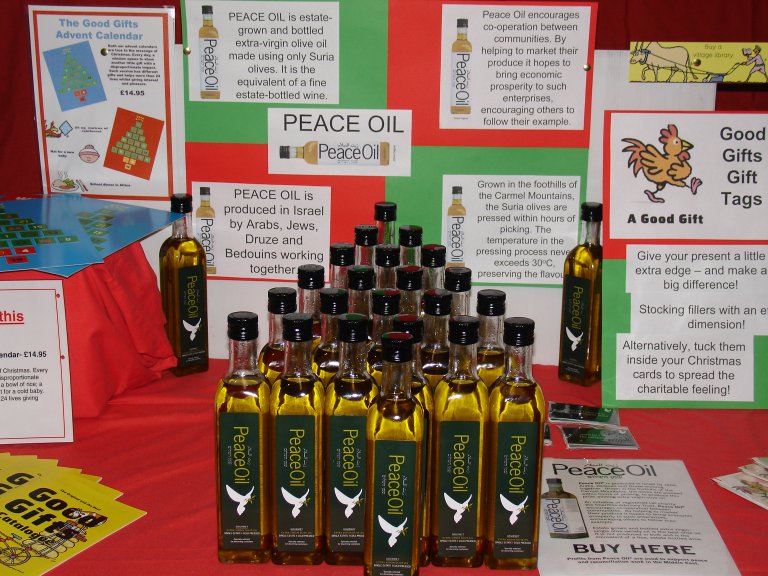 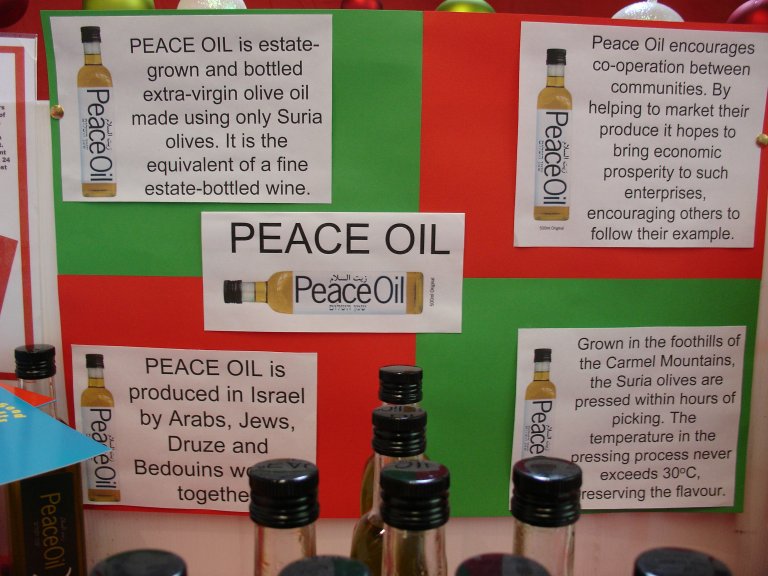 Peace Oil all working happily together 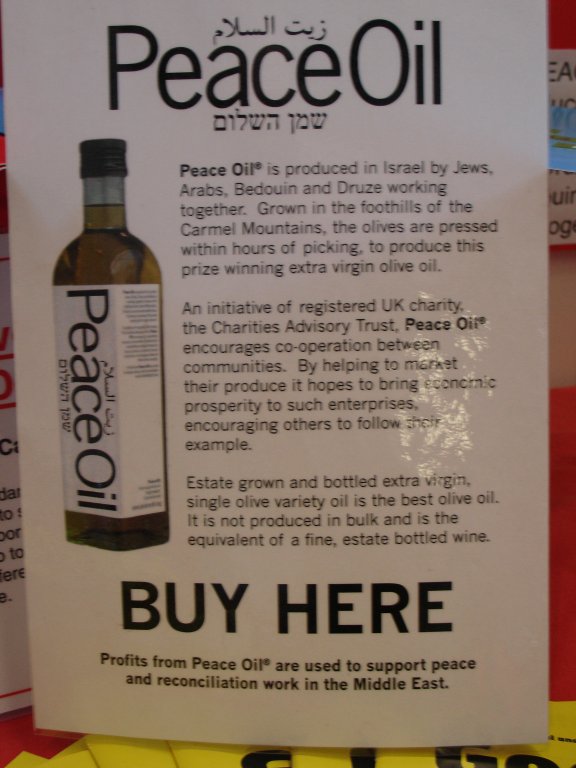 A few years ago I was at the Beyond TV International Film Festival in Swansea. A few of the film-makers had been in Palestine filming and helping to bring in the olive harvest. They brought back with them olive oil. It was one of the best olive oils I had tasted. I always regretted I had not brought any back home with me.

During the summer I learnt that Holy Trinity and St Mary's Church in Guildford were expecting a consignement of Palestinian oil. But I have never been able to get my hands on any.

I was therefore very pleased to walk into St Mary's Church last week and find Peace Oil on sale. I bought for Christmas presents two bottles of what I thought was Palestinian olive oil.

Peace Oil is an olive oil from Israel. It is a high quality, single estate, cold pressed extra virgin olive oil. It is produced by Druze, Jews, Arabs and Bedouin working together (but not a cooperative). The trees are in the foothills of the Carmel Mountains. The olives are cold pressed within hours of being picked. Not cheap, but then the monies raised (it is claimed) goes to help support peace and reconciliation work in the Middle East.

Strange no fairtrade logo for all that is claimed!

The more I looked the more concerned I become. It is not as claimed, the different groups working together. It is an Israeli farmer employing cheap labour. It is not certified organic on the ludicrous grounds it cannot be as neighbouring farms are not organic! It is promoted by Zionist groups, on sale at a trade fair which also had property in occupied territories.

It is not, as I thought, the church selling Peace Oil, but Card Aid who are in the church in the run-up to Christmas. Questions of Card Aid have hit a brick wall. They are very defensive which of itself is suspicious. Where does the money go? They cannot say as too sensitive. And yes they are all working together because the Jews are employing the Palestinians!

A total lack of transparency, coupled with highly misleading claims.

Card Aid has pre-Christmas shops in London and the Home Counties. Please go in and ask question. Do not be fobbed off.

Is it a mere coincidence that Peace Oil was launched with a massive advertising budget (ads on the Tube do not come cheap) at the same time Zaytoun olive oil was launched?

Zaytoun olive is Palestinian oil. Zaytoun is a non-profit organisation established to support Palestinian farming communities by helping to increase the market for their olive oil products internationally, and also by helping the farmers themselves improve the quality of their oil through training and equipment provision. Zaytoun is supported by UK charity War on Want amongst others. They were awarded Fairtrade certification for their olive oil in March 2009.

Does anyone know anything about this olive oil? I bought it in good faith believing it was the Palestinian oil that St Mary's and Holy Trinity Church brought over in the summer. But to my horror I found it was Israeli oil. The more I look, the more concerned I become. If anyone has first hand information from Israel or Occupied Palestine, that would be very helpful. In the meantime, I am asking the church to have this oil withdrawn until such time as we can get straight answers.

I am going to assume that yours was an honest mistake thinking that there was no controversy about TWO things being sold as "Peace Oil" (different marketing entities, different sources of the oil).

So instead of saying "Peace Oil" ISN'T this or that, look into the matter and specify to WHICH you are referring. The stuff from peaceoil.net IS from three fair trade sources ....

Sindyanna of Galilee, a group of Arab and Jewish women, buys fair trade Palestinian olive oil from Arab farmers in the Galil region of Israel. The women of Sindyanna work to promote land preservation, environmental quality, women’s empowerment and labor rights. Sindyanna is certified by WFTO. Green Action, a grass-roots, “socio-ecological” change group, promotes fair trade in Israel. Avi Levi, Green Action’s fair trade advocate, works with Palestinian farmers in three West Bank villages near Nablus to help them develop export markets for their fair trade Palestinian olive oil. Canaan Fair Trade, based in Jenin, Palestine, sells the delicacies of over 1700 farmers organized in informal cooperatives in Palestine and represented by the Palestine Fair Trade Association. Both Green Action and Sindyanna follow the guidelines of the PFTA, ensuring that their Palestinian olive oil is fairly traded.

The so called peace oil from peaceoil.org is not (it's more or less as you described). Especially since you are in Britain, yes, there is the unfortunate likelihood that your churches, etc. might be being tricked into getting the wrong "peace oil".

Yes, I am referring to Peace Oil from

http://www.peaceoil.org/ not Peace Oil from

I did not mention that there were two olive oils from the Middle East as at the time of purchase I was not aware of this and as I said, I walked into the Church and thought what I was buying was what the church had taken delivery of in the summer. There was no reason for me t believe otherwise. I also said how pleased I was to see it on sale! I also assumed it was the church selling the charity Christmas cards, not that it was Card Aid who had a temporary shop within the church..

It was only later I learnt that what I had bought was Israeli oil and that there was another Peace Oil in the USA that was genuine fairtrade Palestinian olive oil .

If I can be so easily duped, and I am more aware than most, it is easy to see how others can be duped. Which is why I have written this article and are asking people to visit the Card Aid shops and kick up a stink. whilst at it, also ask how much of the purchase price of the cards actually goes to the charity. If you want money from cards to go to a charity, then buy from the charity (not from a middle man).

Talk to however is hosting the shop and ask them if they are aware they are being sold a pup.

It is obvious this is a very controversial issue as Card Aid had their lies already well rehearsed and were very aggressive and defensive. They even claimed peaceoil.net had withdrawn their criticisms but had not got around to withdrawing from their website! It would be interesting to hear what peaceoil.net has to say to that comment.

A Tale of Two Peace Oils

Very, very dubious about these kind of things as they tend to be overpriced in return for a sympathy vote.

best olive oil is from Aldi and Lidl

A blind tasting by a panel of olive oil experts found bottles at Aldi and Lidl were better (and far cheaper) than those at the Big Four supermarkets.

The consumer group described Aldi's Evoo and Lidl's Primadonna oils, at 33p per 100ml, as 'exceptional value', each receiving four stars, along with Waitrose's extra virgin oil, which costs 50p per 100ml.

I can personally vouch for the Primadonna oil, it has a very light fruity taste meaning it is still very fresh. To keep it in the best condition, it is best to store in a cool place that is also dark.
hope that helps

When it comes to Olive oil, you want, as Jamie Oliver says in Jamie's Italy, the best. The best is extra virgin, cold pressed. And the best is not cheap.

It tried Sainsbury's Taste the difference top end a couple of weeks ago when it was on special offer. I found it to be unpleasant and gave it away. When I last looked they had an Italian unfiltered in a litre bottle on special offer. It is quite good.

As I said one of the best olive oils I have come across is that from Palestine. A view confirmed recently on a very tacky food programme on Channel 4. The piece on Palestinian oil was quite good. [Food: What Goes in your Basket?, 20 October 2010]

In Brighton people are spoilt for choice. Grocer and Grain, Infinity Foods, Taj the Greengrocer all have a good range of oils, the last two having Palestinian oil.

In Occupied Palestine farmers have great difficult harvesting their crops and getting the oil to market. Their trees are destroyed, they are denied access to their trees to harvest the crop, difficulties in exporting the oil.

firing rockets into Israel then i might consider buying their products.

But, until then, I'm boycotting them

Palestine is the home of the olive tree, with some of the oldest olive groves in the world, some dating as far back as 1500 to 2000 years. The olive trees produce fruit that supports over half the population and can be seen dominating the agricultural landscape.

Who profits from the occupation?

Israeli and international corporations are directly involved in the occupation: in the construction of Israeli colonies and infrastructure in the occupied territories, in the settlements’ economy, in building walls and checkpoints, in the supply of specific equipment used in the control and repression of the civilian population under occupation.

Exchange of e-mails with St Mary's

Copies of exchange of e-mails with the rector of St Mary's Church in Guildford that is selling so-called Peace OIl.