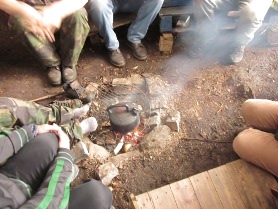 Two Indonesian activists visited Happendon Woods (Lanarkshire), yesterday- as part of their 'deadly coal' tour. Siti Maemunah (Mai) and Kahar (Ocha) were made to feel very welcome- and a long and fruitful discussion took place about the extraction of coal around the world and resistance to the corporations and politicians behind the industry.

Indonesia is the world’s largest exporter of thermal coal - supplying power stations and generating electricity in India, China, Europe and elsewhere around the world. Being global number one has brought wealth for a small number of the elite but for ordinary Indonesians living in the main coal mining zones of Kalimantan, the ‘coal rush’ means damaged livelihoods, ruined farmland and fisheries, plus health and social problems.

Happendon woods camp is the latest line in the defence of the Douglas valley, Lanarkshire. The Happendon Wood Action Camp (THWAC) has squatted a beautiful part of Happendon Wood to serve as a base from which to organise in surrounding communities and to take action from, as well as dig in for the long-haul and inevitable attempt to open cast mine the area.

Mai and Ocha were shown the defences around the site, and discussed at length about how direct action works and the lessons that have been learnt so far in Scotland. We discussed carbon capture and storage, REDD and the violence that is often used to silence dissenting voices.

Mai and Ocha also met the Green party at a meeting in the Scottish parliament and various NGO's and community groups on a very successful trip to Scotland. It is hoped that local NGOs and the Green party will submit a parliamentary motion on mining in Indonesia and with Scotland and Scottish investment in the mining industry.

Next, there is a meeting in London tomorrow evening, organised by London Mining Network to build solidarity in the struggle against the global expansion of coal mining.

If you are interested in attending this meeting, please email,

so that we can make sure we have a big enough room. The meeting is in central London.

For more information about the deadly coal tour
please contact:

For background information on coal, Indonesia and climate change see:

Dark Materials, published by Mines and Communities: an in-depth piece of research that
exposes the cold facts behind the coal figures.