A 1,400 word piece on the continuing peace campaign of Brian Haw in London's
Parliament Square. 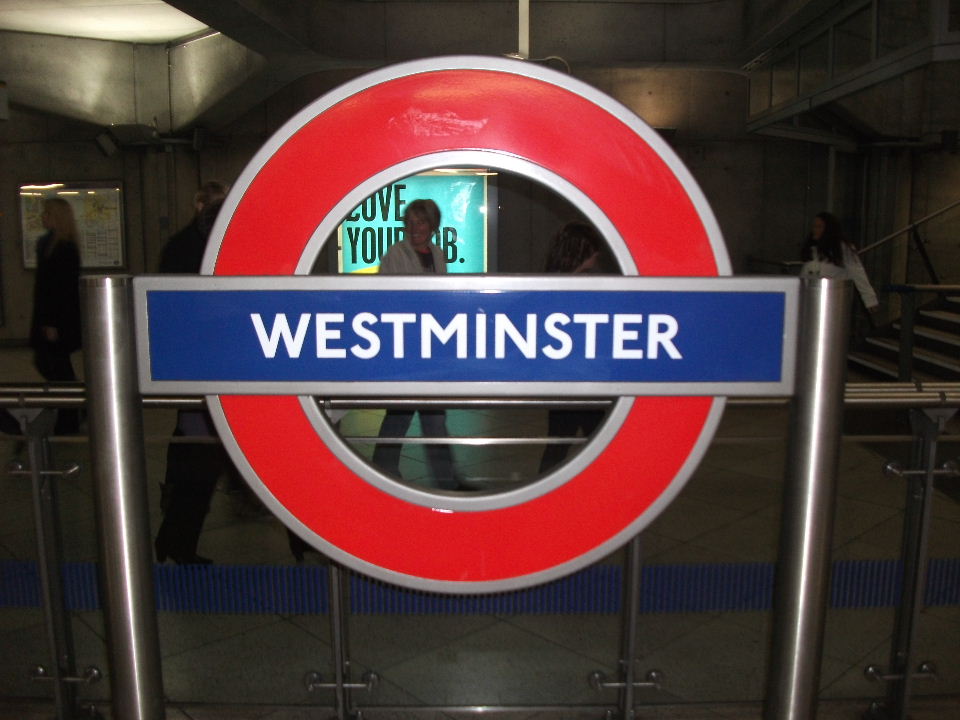 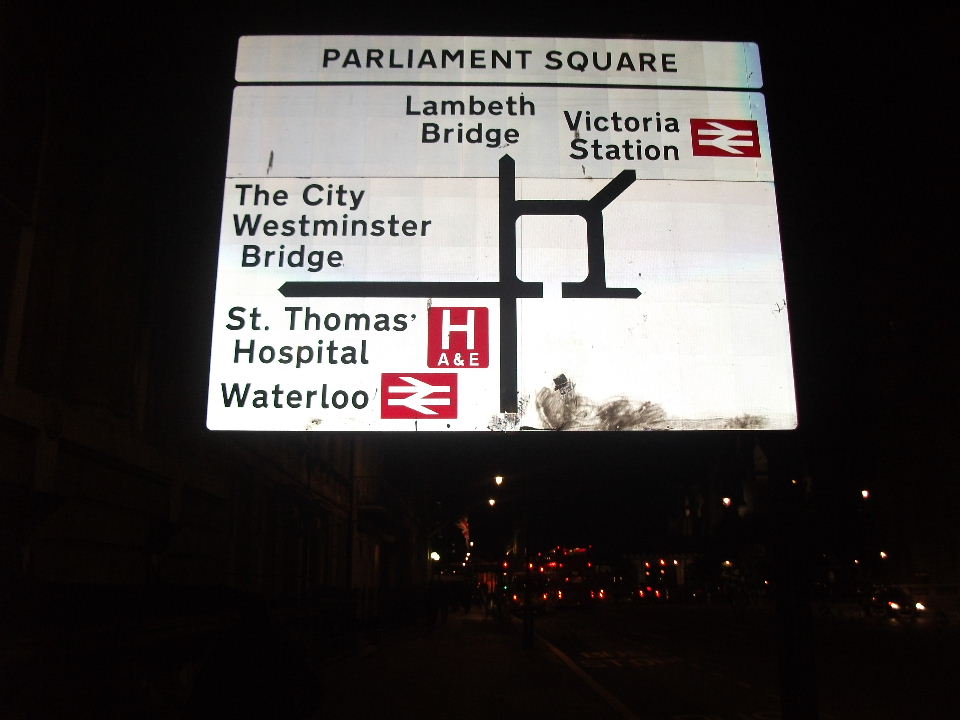 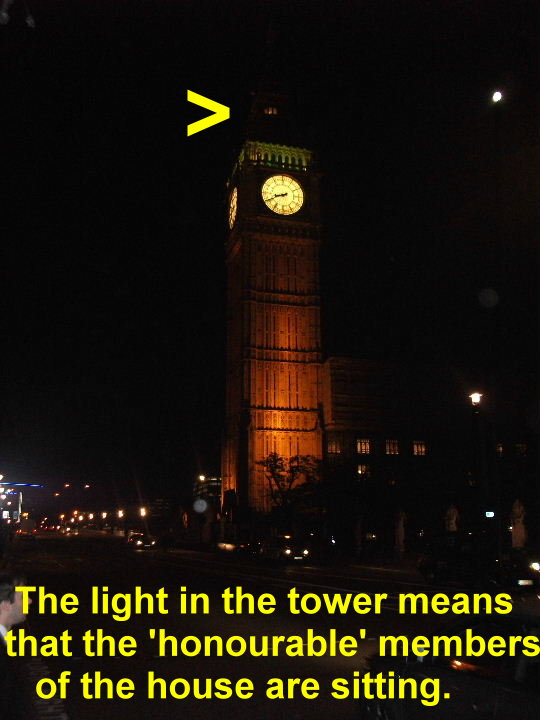 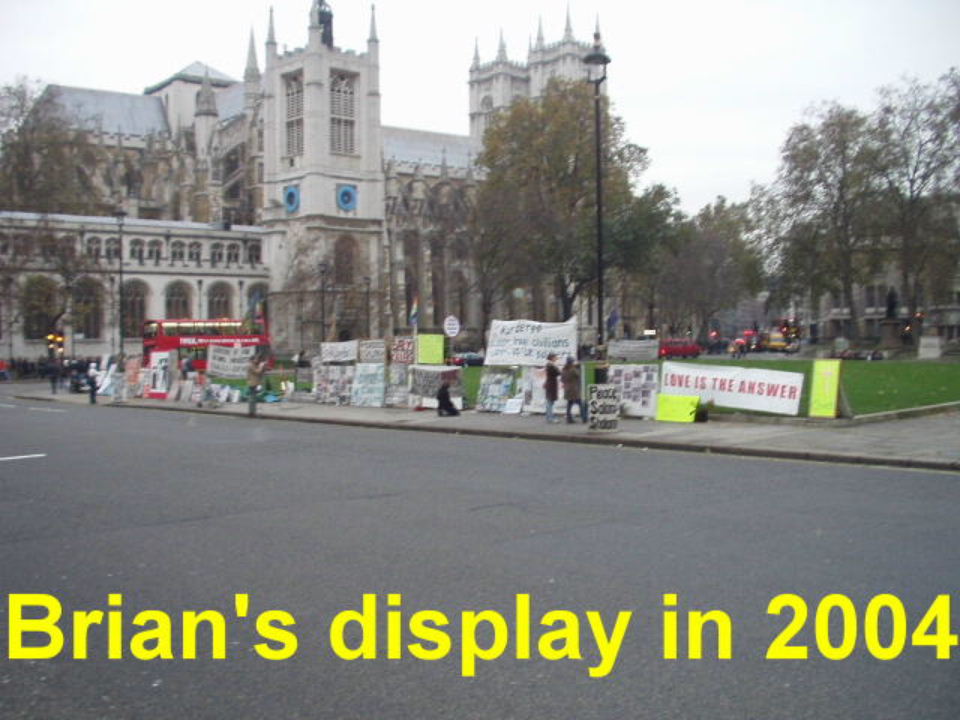 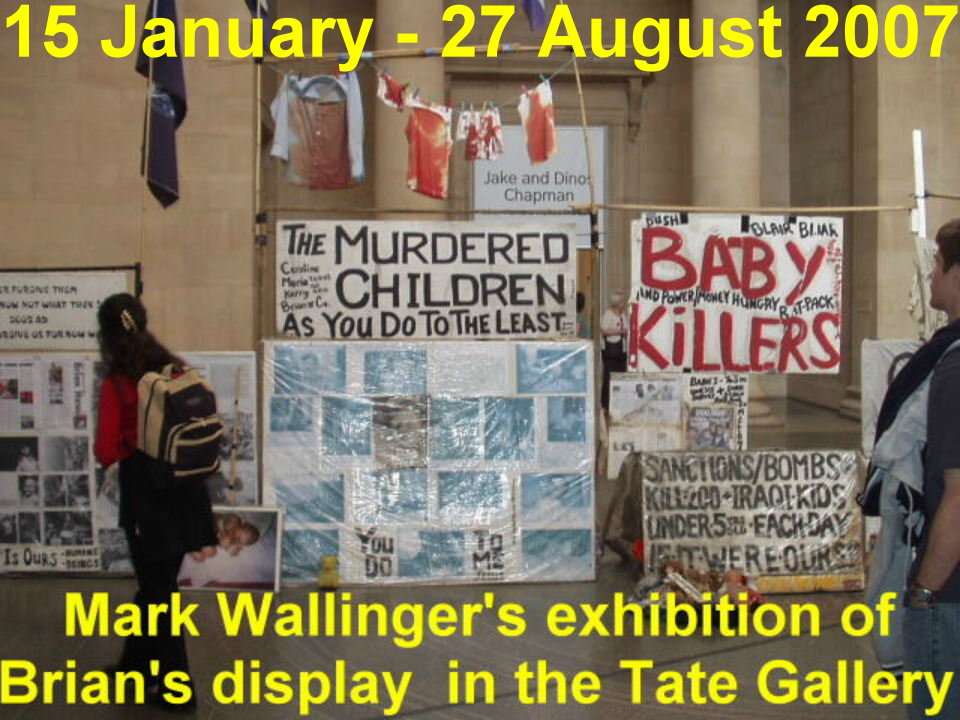 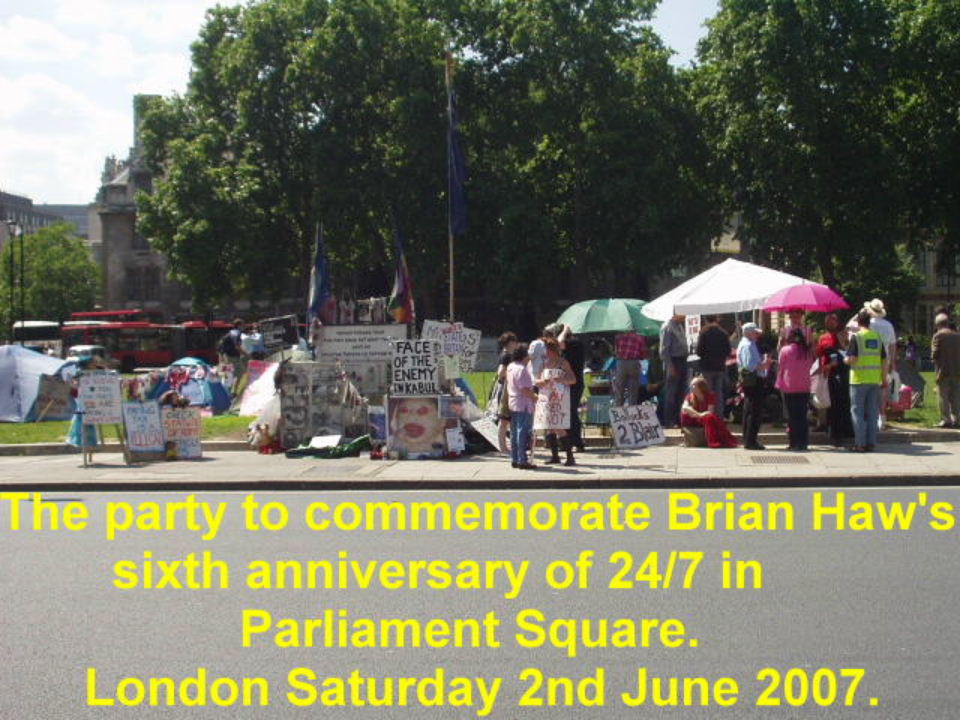 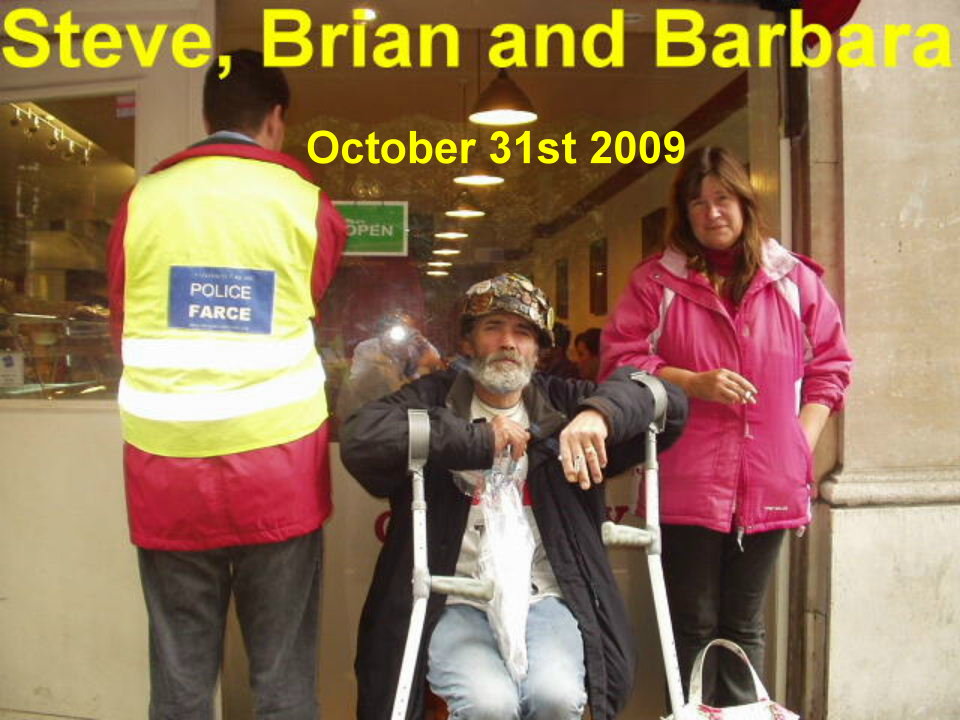 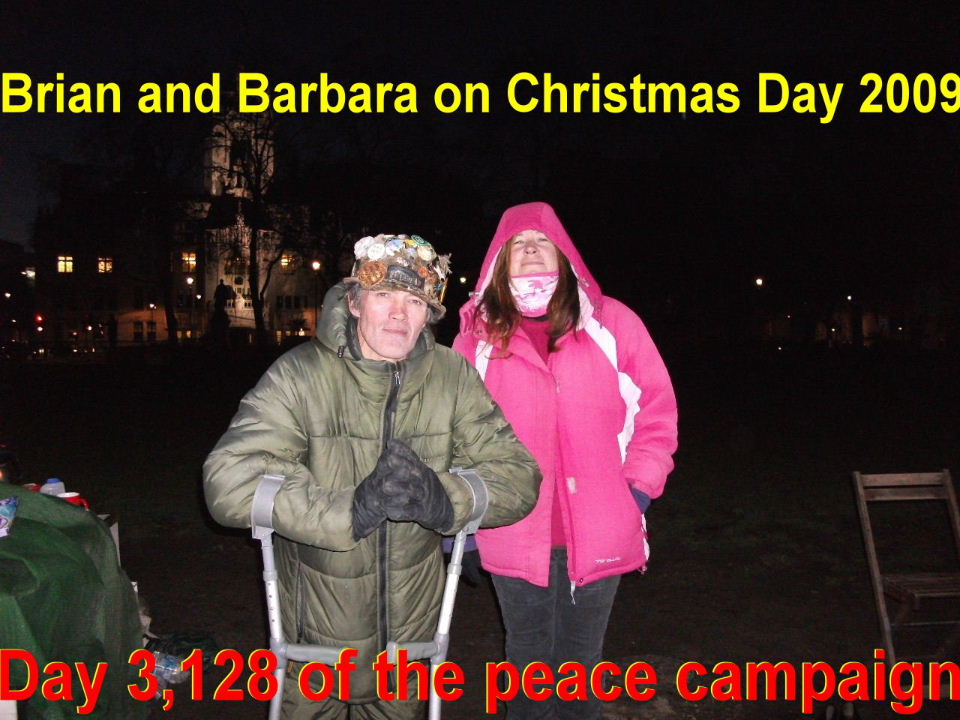 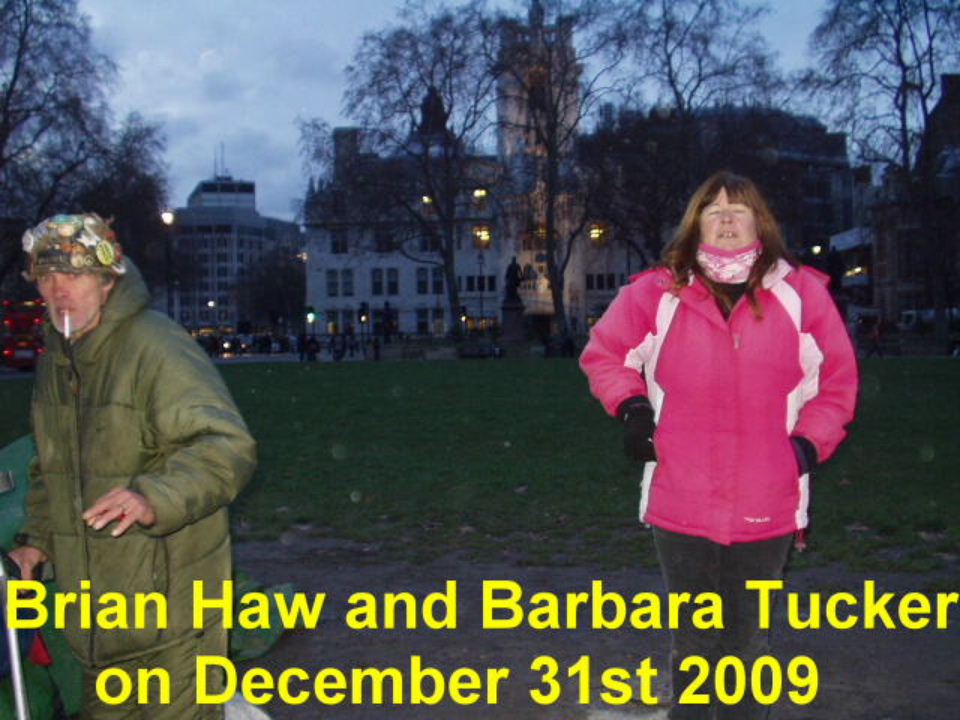 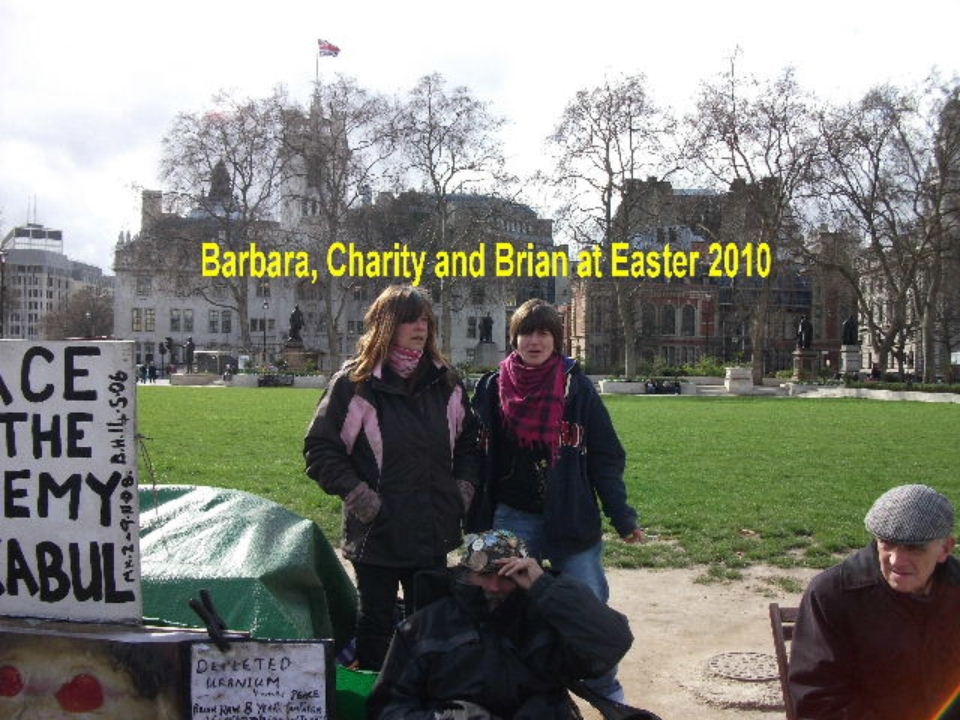 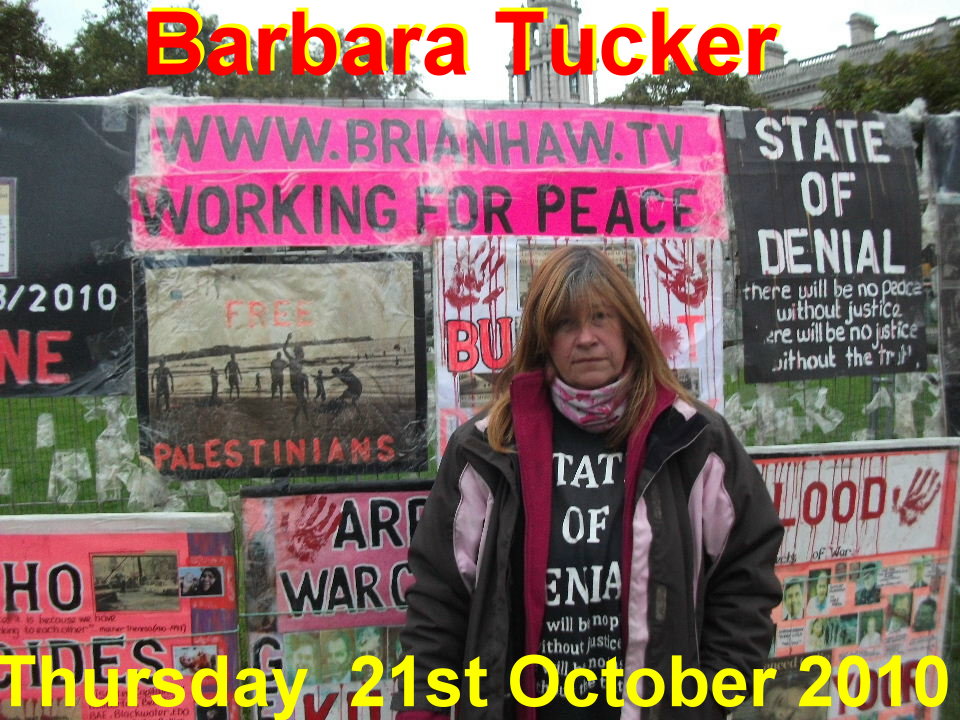 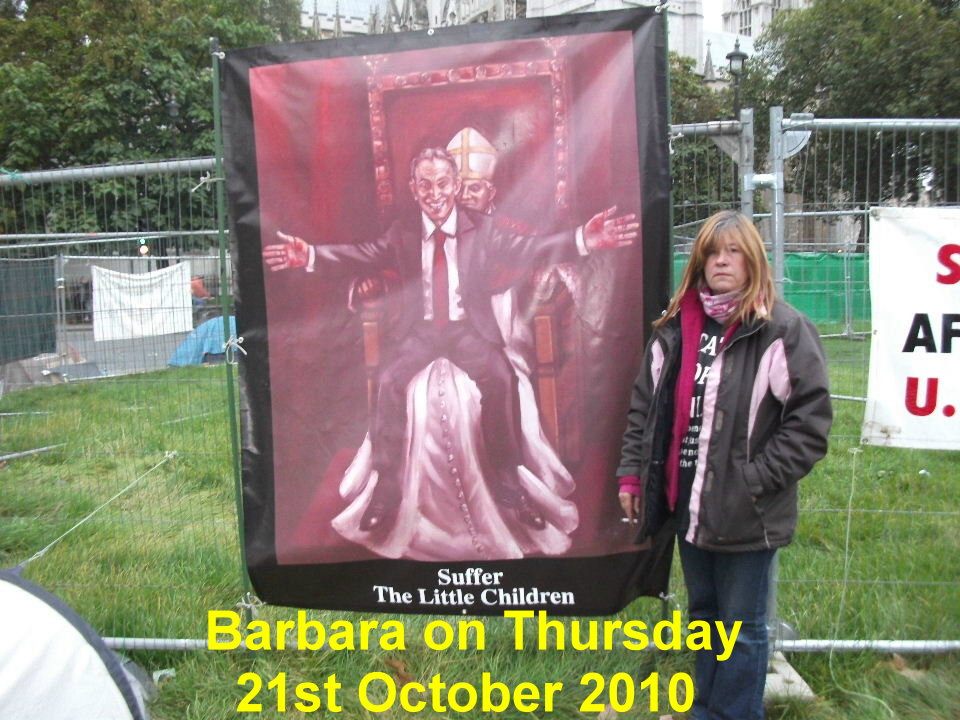 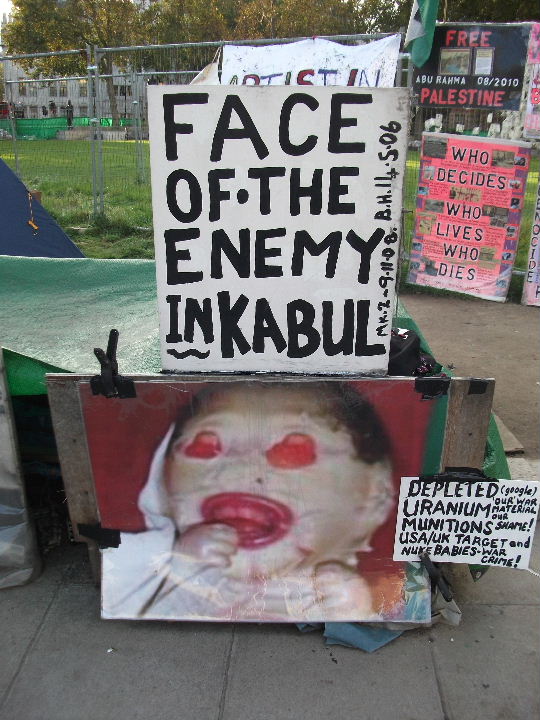 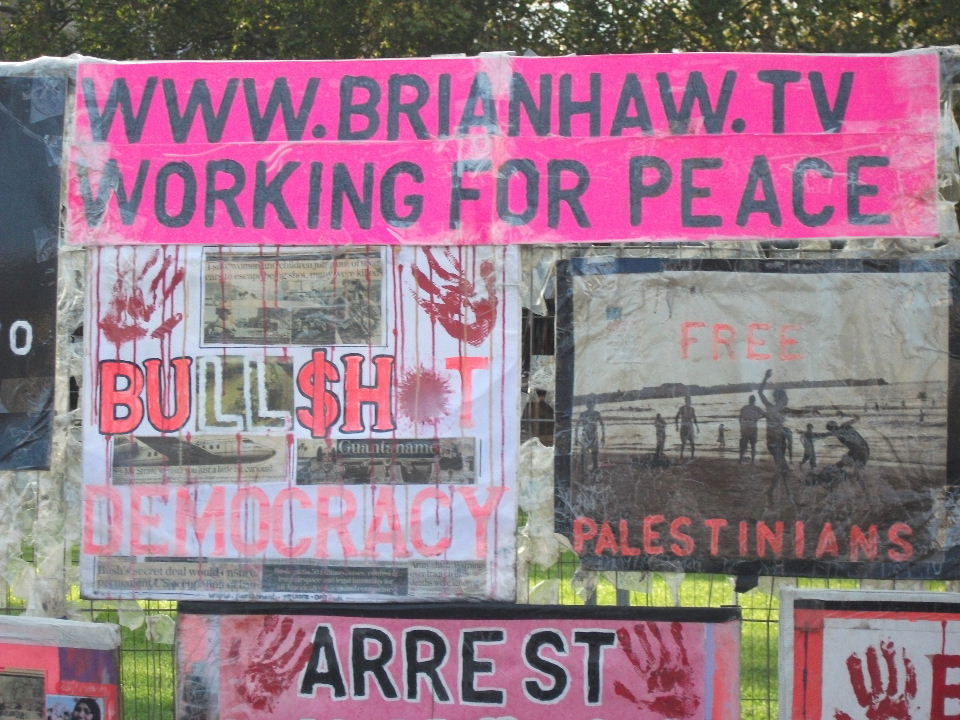 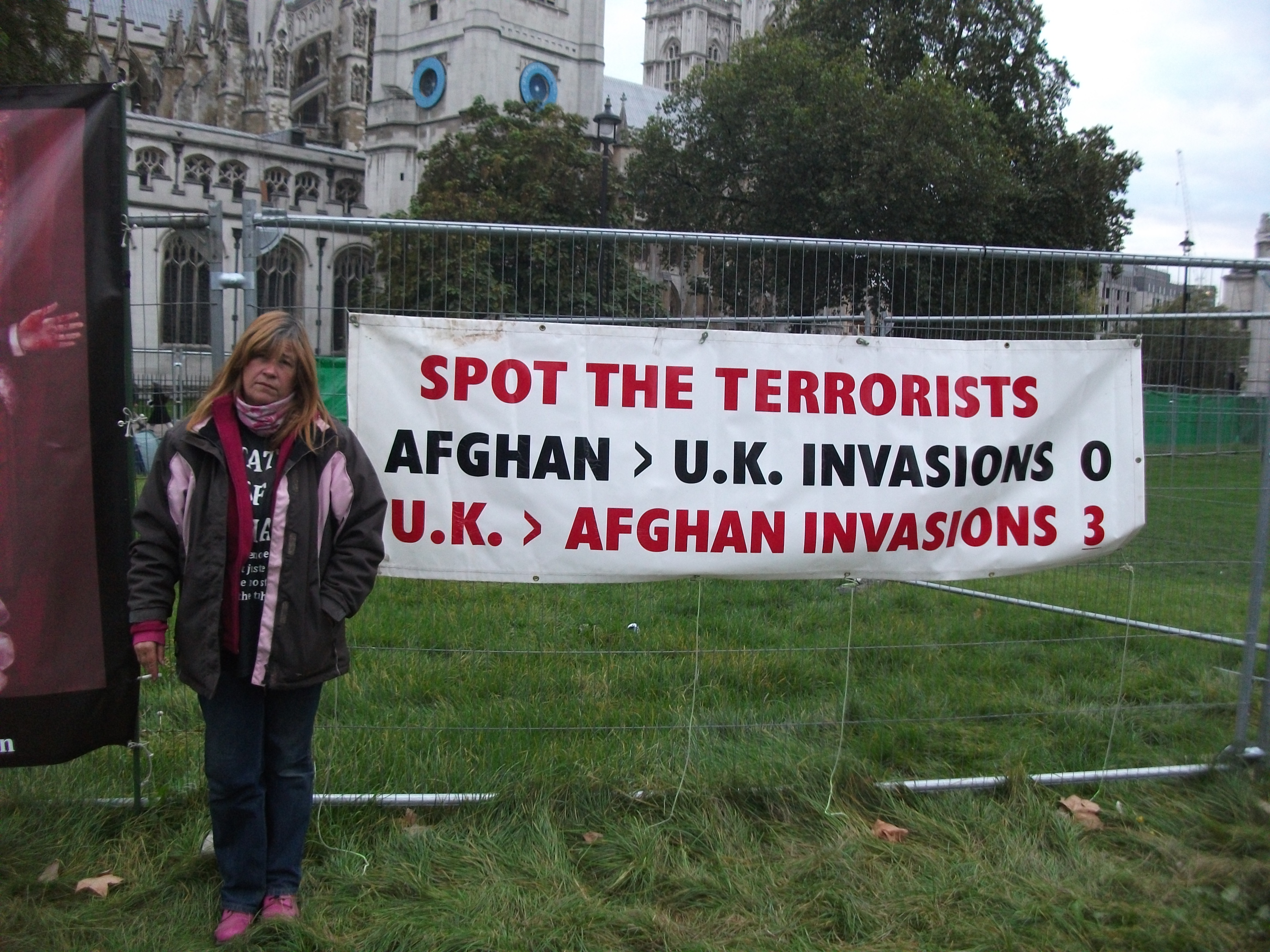 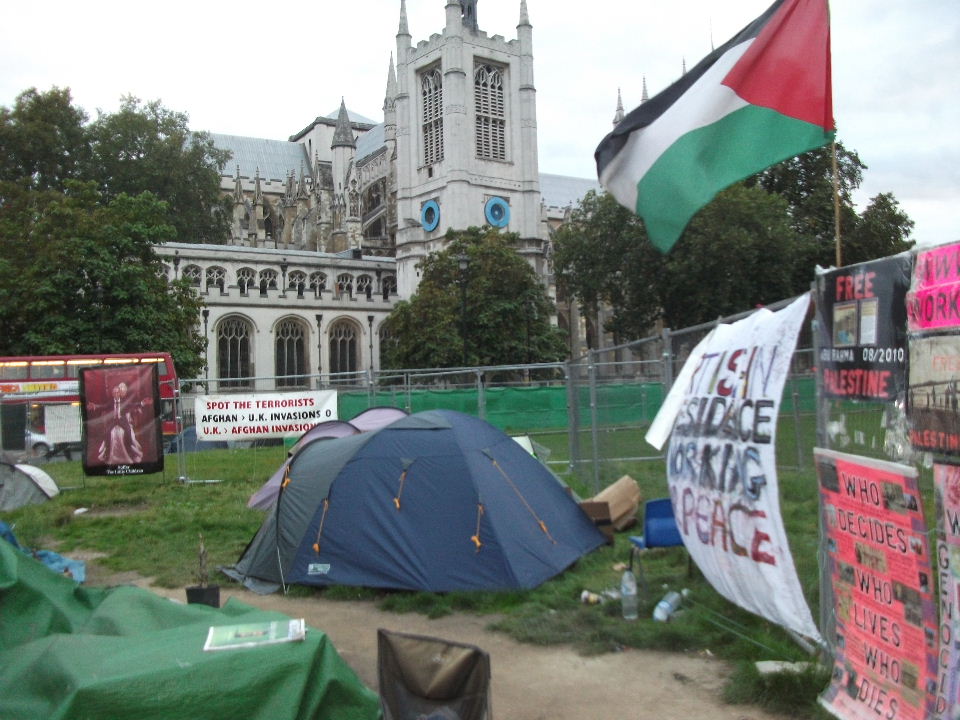 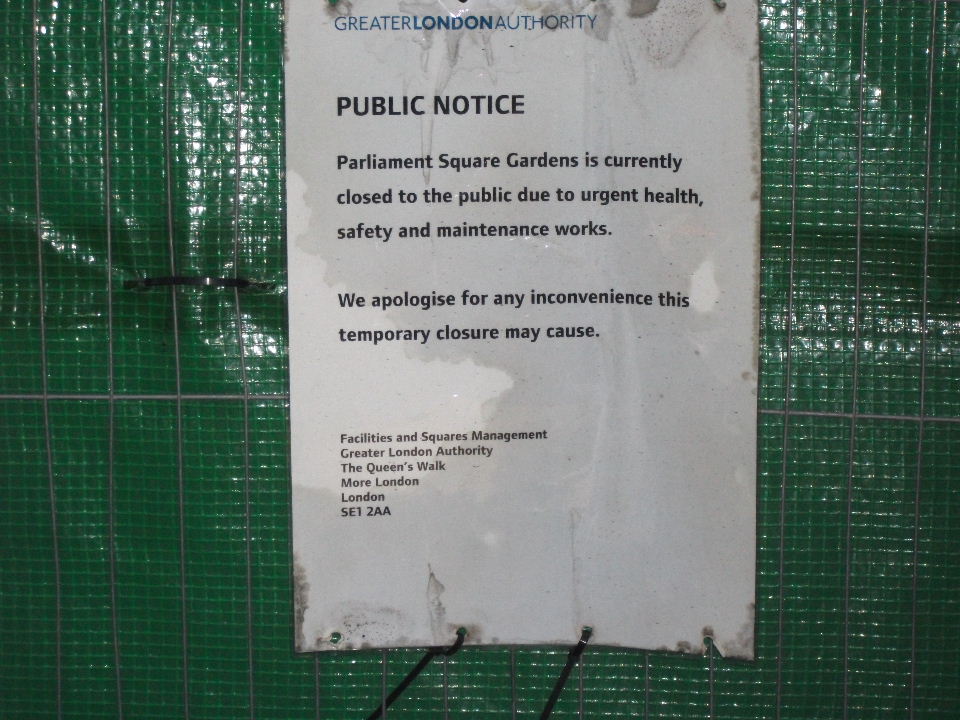 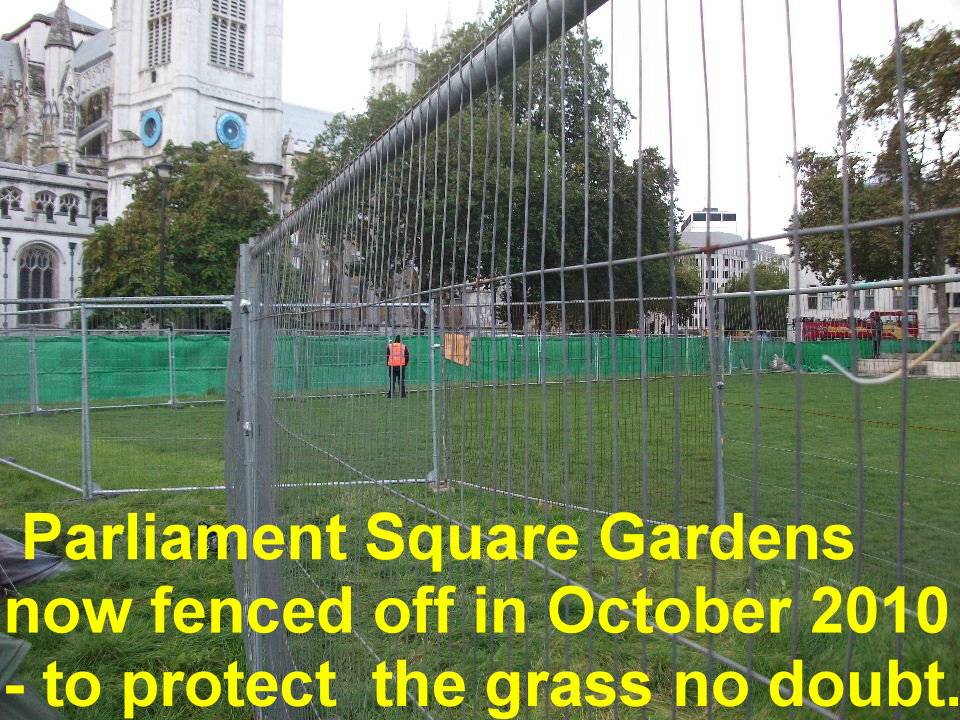 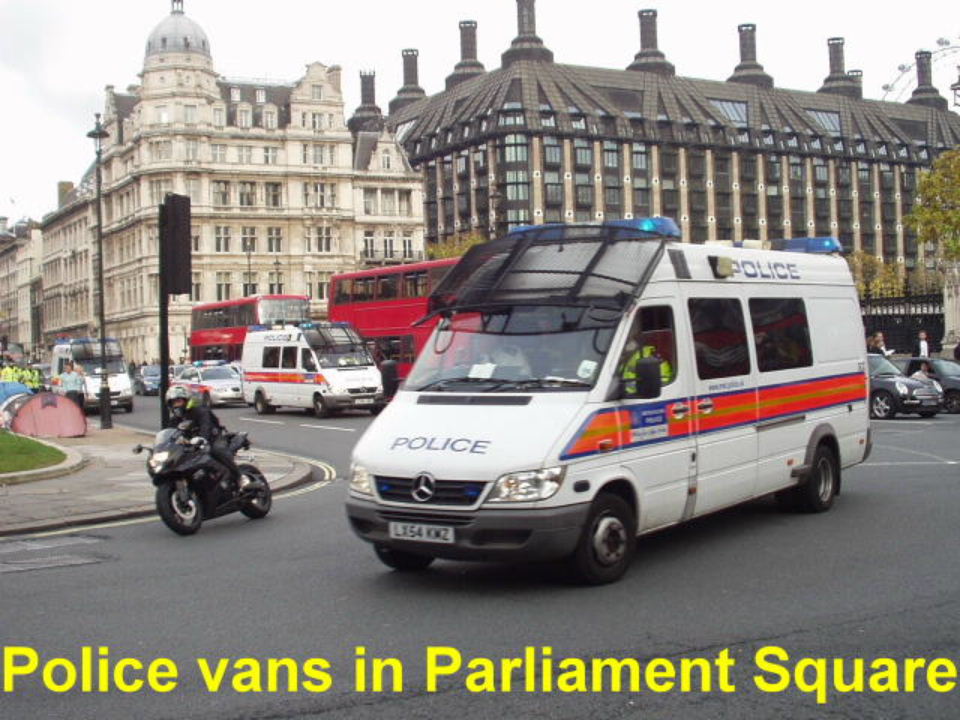 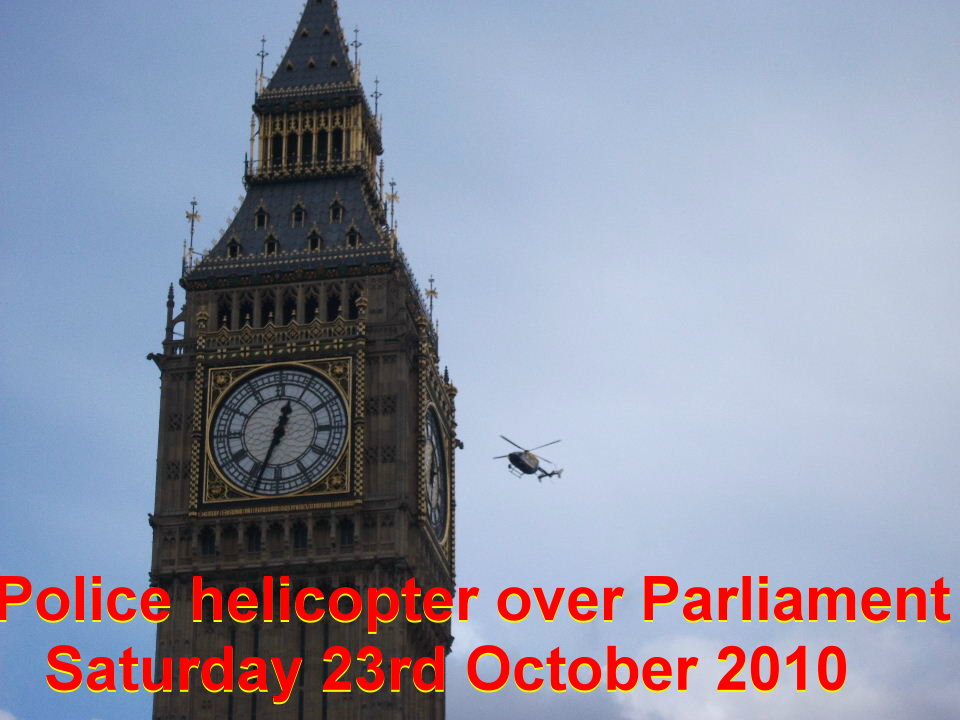 This article is about the long term peace campaign of Brian Haw and Barbara Tucker; the so called ‘Democracy Village` which occupied Parliament Square gardens for several months until July 20th this year had no connection with Brian Haw’s long running campaign.

There are numerous reports from ‘our political correspondent’ in Westminster, from outside 10 Downing Street, from College Green opposite the Palace of Westminster as the Houses of Parliament are sometimes referred to and perhaps from the main square itself. However, there is rarely any view of the long time peace campaigner Brian Haw whose views are seldom if ever sought by our great seekers after truth.

People who protest against war have opinions which are seldom heard, they are what journalist John Pilger calls ‘distant voices’.

BBC political editor Nick Robinson grabbed an anti-war placard from a protester who was being waving it behind him as he was broadcasting from Westminster on the six O’clock news of Thursday October 21st.

From Robinson’s blog:
“I have a confession. After the news was over, I grabbed the sign and ripped it up -- apparently you can watch video of my sign rage in full glorious technicolour on the web. I lost my temper and I regret that. However, as I explained afterwards to the protesters who disrupted my broadcast, there are many opportunities to debate whether the troops should be out of Afghanistan without the need to stick a sign on a long pole and wave it in front of a camera.
I am a great believer in free speech but I also care passionately about being able to do my job reporting and analysing one of the most important political stories for years.”

His great belief in freedom of speech doesn’t extend to interviewing dissenting voices like Brian Haw or Barbara Tucker. He describes his job as `reporting and analysing one of the most important political stories for years` meaning reporting the views and wishes of the rich and the powerful.

Remember the MPs expenses scandal as reported in May and June of 2009?

More than half of all MPs submitted very questionable expenses claims. One need only think of the demands for the duck house (Sir Peter Viggers), the 550 sacks [weighing half a ton] of horse manure (David Heathcoat-Amory), the two 'limed oak toilet seats' (Derek Conway), and the pornographic videos (Jacqui Smith). While these items may seem merely comical many MPs overpayments run in to six figure sums, which the honourable members are refusing to pay back under what is termed ‘Parliamentary Privilege’. As if this wasn’t enough the departing honourable members were to be given ‘golden goodbyes’ of up to £65,000 when they left office in May this year.

Brian Haw has been on his peace campaign for over 9 years now since June 2nd 2001. His protest was initially against the injustice and suffering caused to the people of Iraq by the UN economic sanctions and the bombing of the country by the US and UK. Nine years later, after invasion and occupation, Iraqis have lived through another terrible period and western troops have pulled out to continue their war in Afghanistan with the US and NATO bombing claiming many civilian casualties.

His massive display of anti-war placards and banners had proved such an embarrassment to the government that they felt compelled to enact new legislation specifically to get rid of Brian - SOCPA (the Serious Organised Crime and Police Act 132 (SOCPA 2005).

In the early hours of Tuesday morning May 23rd 2006, police moved in to enforce the conditions - putting many banners, pictures and placards in a large metal container. The operation involved 78 officers and cost many thousands.
Nevertheless Brian has continued to stay in the Square with his somewhat reduced display while in 2006 artist Mark Wallinger recreated the Parliament Square protest for a dramatic installation at Tate Britain. Running along the full length of the Duveen Galleries. State Britain consisted of a meticulous reconstruction of over 600 weather-beaten banners, photographs, peace flags and messages from well-wishers that had been amassed over the previous five years before their confiscation by the police.

He does not have the luxuries available to the honourable members opposite such as limed oak toilet seats or duck houses. Brian uses the public conveniences at Westminster underground station and gets food from supporters. Despite hassle from the police and others, Brian and his main supporter, Australian Barbara Tucker have remained lawfully opposite Parliament reminding those in power of the costs of their wars. Barbara has been arrested a staggering 39 times in her near 5 years on the campaign including at least one arrest without a warrant, which is illegal.

Barbara, from the sunnier climes of Melbourne, Australia has lived in Britain on and off since 1981 and now resides in London. In December 2005 she decided to join the campaign in Parliament Square. Despite consistently advocating non-violence she has been arrested an average of about once every 6 weeks. Many of these detentions merely involve being held for a few hours while meaningless paperwork is filled in followed by her release without charge. However, she has been held for several short spells in Holloway women’s prison and Charing Cross and Kentish Town police stations. Last year she was subjected to a frightening experience in Belgravia police station at the hands of the TSG (Territorial Support Group) who are a paramilitary style unit of the London Metropolitan Police.
Mrs Tucker sounded emotional when she described how six burly members of the so-called ‘flat caps’ (TSG) were brought in and who then used unlawful stress positions on a defenceless and peaceable lady. The TSG are a notorious section of the London Metropolitan police based at Paddington Green police station who were involved in the killing of Ian Tomlinson, the newspaper vendor who died on April 1st last year during the 2009 G-20 summit protests.

The police illegally held Barbara Tucker on the basis of an arrest warrant they could not produce and worse the prosecution attempted to introduce a false criminal charge against Brian who has no criminal record.

Barbara was very upset at the preposterous nature of her imprisonment and in court shouted several times “Produce the warrant!” She was extremely distressed and with some justification as an arrest without a warrant is a serious matter. The presiding officer District Judge Caroline Tubbs told Barbara to leave the court which Barbara immediately did. The prosecution had dropped the entire `case` against Barbara like the proverbial hot potato.

In 2007 Brian won the Channel 4 News award for Most Inspiring Political Figure in Britain getting 54 per cent of the votes cast by the public in the channel's political awards. Gen Sir Richard Dannatt, the head of the British Army, who embarrassed the Government by saying troops should be withdrawn from Iraq, came second with 18 per cent. Tony Blair was backed by eight per cent and David Cameron by six per cent.

Sadly the nine years of primitive living have taken their toll on Brian and he was recently hospitalised in St Thomas’ hospital.

He is very frail and had been on crutches. He was admitted to hospital on 23rd September 2010, with breathing trouble. Tests showed a tumour. He is having more tests, then treatment. In his enforced absence, Barbara `Babs` Tucker is Captain of the Good Ship Parliament Square Peace Campaign.


Brian remains committed to the cause saying: “I will be back and able to cry out again for those denied a voice.”