Latest: 4th December there is a National Day of Action against Tax Avoiders and advice on doing your own action.

Once again this weekend there were Anti-cuts occupations of Vodafone high street stores. In Bristol activists picketed and shutdown the vodafone in protest against corporate tax evasion and government cuts [2]. Student protesters once again activated a shut-down of a Vodafone store in Birmingham city centre in larger numbers, coinciding with People and Planet's annual gathering. In Glasgow activists announced that they were occupying the premises as a protest to the £6bn in tax that the company avoided when public services are being slashed to ribbons. There was another successful action in Clumber Street, Nottingham including a critique of the slogans used. In Cambridge over 20 people occupied the Vodafone shop in the Grand Arcade, three arrests were made, later released without charge. Other actions took place in London, Newcastle and Brighton. Get involved in your area.

On the last weekend in October a series of sit-in actions and blockades managed to close down at least 21 Vodafone stores across the UK. Bringing a new generation of protest out onto the High Streets in full view of the public, gathering much support, people could see that direct action was effective and we would not sit back and take the cuts. See upcoming actions and meetings this week. 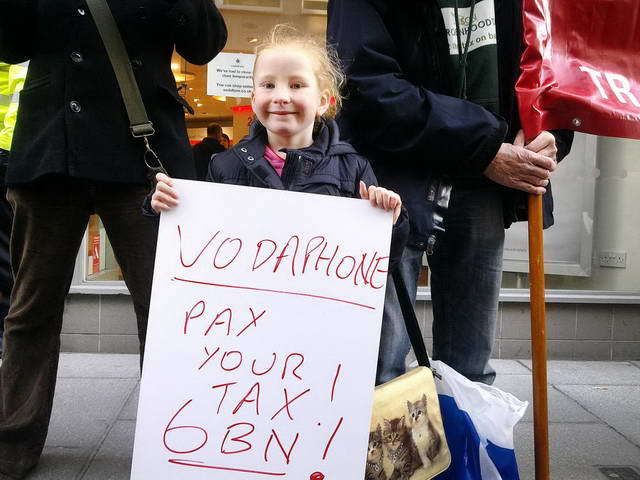 In London around 100 people gathered at Speakers Corner before splitting into groups to target Vodafone stores. It didn't take long with the first store closing with the arrival of the protestors and by half twelve all three stores on Oxford St were shut down [report 2, 3] Up to 5 were closed during the day, including Brixton [report]. It's a similar story in other places where stores were closed ahead of planned direct action and protests or when demonstrators arrived.

In Glasgow people started early with the store in Buchanan St. Other shut downs include two in York, two in Liverpool, Leicester, Manchester, Bristol [2] [3], Birmingham, Hastings, Oxford [2] and two in Brighton where police made several arrests.