The protesters in the Tory HQ building and on the roof released the statement: "We oppose all cuts and we stand in solidarity with public sector workers, and all poor, disabled, elderly and working people. We are occupying the roof in opposition to the marketisation of education pushed through by the coalition government, and the system they are pushing through of helping the rich and attacking the poor. We call for direct action to oppose these cuts- this is only the beginning of the resistance to the destruction of our education system and public services."

In response to NUS President's Aaron Porter's condemnation of the actions, the protestors stated:"Students have been asking the government to save our education system for years, and now all of the political parties have turned their backs on them. It is time to take the necessary action to preserve not only our higher and further education institutions, but our entire public sector. The cuts are a violence against the public, made only to the benefit of the richest and corporations- we cannot let them go ahead." 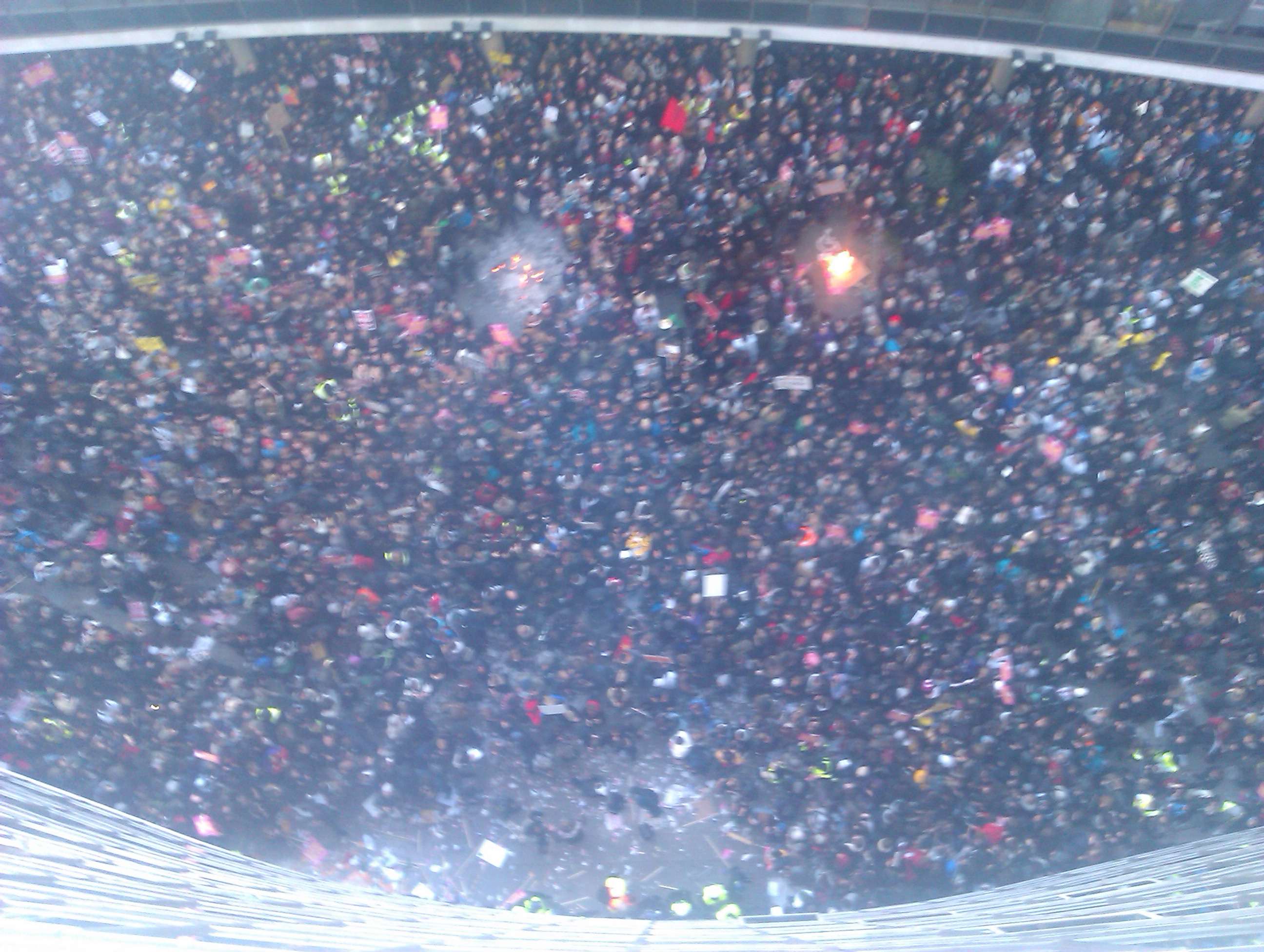 view from the rooftop

Arriving at the starting point of the demo the energy (and noise) levels were already extremely high. There were thousands of young people from all over the country, but it seemed that the whole event was being carefully controlled by stewards. All the placards had lame reformist slogans (admittedly with a few vaguely funny ones) and we were expecting a pretty tame march from A to B. When we finally found the Anarchist (or “Radical Workers and Students”) block, after fighting our way through Trotskyists and NUS stewards, I was disappointed to see that it was pretty small and not in a very good position in terms of visibility. On the march itself, the only act of civil disobedience we saw was a short lived attempt by about 20 people to sit down and block the road. However, when we passed the Milbank building the anarchists had been split up a little and when we looked back to try and spot some red and blag flags we were surprised to see that they were in amongst a group of probably hundreds of others. People were running into the building trying to smash windows and graffiti-ing the walls, because we didn’t see exactly how it started we don’t know how true the mainstream media’s claim that a small group of anarchists “hijacked” the peaceful protest by instigating property damage is. One thing though is for absolute certain, that self-identified anarchists were themselves only a small minority of all the people engaged in all the acts of civil disobedience and property damage. Even at this point there were literally hundreds of people either directly pushing against police, throwing stuff at them or smashing things. The NUS claim that there were over 50 000 people in total at the demonstration and only a minority took part in the “violence”. A “minority” of this number would mean far more people than usually attend demos in recent years.

That first incident seemed to die down quite soon and we assumed it would be easily put down by the Met, based on previous painful experience of their capabilities. Besides, we had already seen more property damage than had happened at the London G20 protests, and of a more suitably symbolic building so it had already been more of a successful demo than we’d been expecting. We walked on and soon came to the end point of the march. Predictably enough for a demo organised by bureaucrats, we were expected to stand around listening to speeches and chanting in a space controlled by security guards and stewards. We decided “fuck this” and were on our way back down towards where we came from, when we noticed smoke coming from the courtyard in the Milbank building. The energy there then was pretty excited and there were virtually no police in sight, there was a small line of cops at the entrance and people were already throwing stuff at them – to a degree rarely seen at demos in Britain. However, we had received a call out to go to the business and innovation centre where apparently something was going down. We never made it there because as we were walking down we saw a crowd of people with a sound system break away from the crowds to the end point. They went down a side street and had a mini reclaim the streets style party with a line of riot police watching, whilst blocking the way to the lib dem headquarters. Amusingly that street was called “cowley street” the same name of a famous leader of the brighton squatting movement during the great depression. People danced to dub step for a while and threw stuff at cops before going back toward the tory hq where the fires were still burning. When we go back there we saw a push and shove situation with the cops in front of one of the big glass walls, that was already nearly completely smashed apart.
The stand off continued for a while, with heightening tensions, amplified by shouts of support from thousands of people behind. Some demonstrators were already inside waving placards and further trying to help break the glass. When the crowds saw that people had got on to the roof and were waving banners, read and blag flags, with their fists in the air, they screamed encouragement and further energised those at the front lines. Eventually some people started smashing apart a different glass wall and the police didn’t even try to stop them. It came down with a resounding crash and we all piled in to the foyer of the building, there was probably over 100 people in this area, some smashing windows, some pushing against cops to gain to access to the stairs, all shouting “tory scum, tory scum”. There was a tense stand off at the door for a while and the very few cops guarding it seemed shit scared and confused, finally this was resolved: we got the doors open. This enabled many to make their way through the building, smashing what they could and making their way to the roof. Many managed to escape through the fire exit after staying as long as they individually felt necessary, but according to news reports some were still inside hours later, and probably many got arrested.

The storming of the Tory party HQ occurred about an hour after the organised march had already started gathering at its final destination point to watch important people deliver pre-recorded (largely inaudible) messages on a giant TV screen. A high-spirited spontaneous demo had been occupying the square outside of the building with a bonfire of placards since the march had passed it by en route. This was despite the stewards’ attempts to file everybody by the building unnoticed, and the crowd seemed a broad representation of demo participants (mostly unmasked with a variety of placards and signs); far from the ‘organised contingent of troublemaker anarchists’ that Aaron Porter, the MET and the mainstream media have predictably reported as at the heart of all transgressive action. In fact, the radical student and workers’ bloc called for by sol fed and afed was disappointingly small and disorganised; comprising just a handful of red and black flags amongst other demonstrators, and seemed to get broken apart 2/3 of the way through the march when cops held the crowd back at a roundabout.

When the plate glass windows of the building started getting smashed, the atmosphere within the square was energetic. The entire crowd seemed behind the actions, cheering support for those at the front, calling for people to move in en masse, and continuously pushing forward in an attempt to do so. This action did not seem in any way pre-planned, but happened spontaneously in the midst of a lively and diverse mass demo of students wanting to direct their anger directly at some of those responsible for selling out their futures (continual chants of ‘Tory scum’ and the like).

There were relatively few cops defending the building at this point and the crowd was able to push through at various points using bodymass with minimal physical interaction once the windows had been broken. Many, once in, set about helping others to join them by smashing other windows (lots of them without masks) to open the atrium up to the surging crowd. Greater numbers were only prevented from getting into the atrium (which filled up quickly) by the lifts having been disabled and the stairwell being blocked off by cops with drawn batons. However the police were lacking in numbers and were prevented from forming a solid line by protestors linking arms and using effective bodymass (we witnessed one individual dearrested by the crowd after having been pulled by cops from this group). Eventually the few police defending the door withdrew, enabling many of the crowd to join comrades on the roof.
Physical violence inside was minimal at this stage, consisting mainly just of pushing, with cops outnumbered and therefore unwilling to antagonise, and protestors intent only on getting further into the building. In fact most of the violence named by the news reports seems mainly to refer just to property damage. This consisted mostly of smashed windows and fire hoses/extinguishers set off, although we have also heard reports of a fire extinguisher dropped from the roof, and we left relatively early. The crowd packed into the square remained supportive of those within the building, cheering and waving at people on the roof. After less than half an hour of our having joined the initial group of occupiers on the roof, a decision was taken collectively by a spontaneous meeting of lots of those present to leave the building together as a group, which we did successfully, a small number of people remaining behind. Having locked their doors, the tory offices which occupied the lower floors of the building (and those inside them) remained untouched.