Over 3,000 anti-nuclear protesters took part in the blockading of a shipment of nuclear waste into north-western Germany this week. After activists and local communities spent four days blocking them at every turn, the toxic containers finally arrived at their Gorleben destination on Tuesday (2nd). 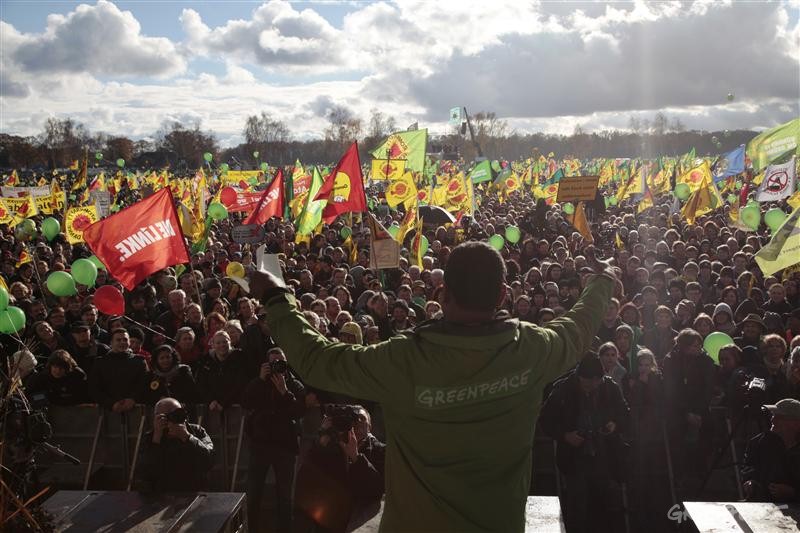 Thanks to a creative approach to getting the 'No Nuclear' message across, the journey took the longest-ever time of 92 hours. It was waylayed by hundreds of locked on protesters, tractors and a Greenpeace vehicle masquerading as a beer truck. Even 400 environmentally-minded sheep blocked the tracks in a case of inter-species solidarity, standing fast until police removed them one by one.

The so-called CASTOR containers of German waste are transported roughly once a year from Valognes in France, where they are reprocessed, back to Gorleben, Germany. Critics say that neither the waste containers or the Gorleben temporary storage facility are safe.

On Saturday, a further 50,000 people turned out to demonstrate against the shipment in the town of Dannenburg. The mass mobilisation was meant to show Angela Merkel that as far as her new pro-nuclear stance goes, she's in the (radioactive) dog house.

Nuclear energy is unpopular in Germany, which felt some of the effects of the Chernobyl disaster in 1986. The country was heralded as a nuclear-free icon after the previous government promised to phase out nuclear power entirely by 2021 - but Merkel backtracked by pushing plans to extend the operating lifespan of Germany's 17 nuclear power plants through parliament on 28th October.

The previous phase-out plan had the backing of the German public. The recent retreat takes an undemocratic hammer to this consensus - for the sake of extra profits for the large energy and nuclear industries. The government too is set to make a mint from demanding millions in extra funds from the energy companies for the transition to renewables.

Despite German riot cops normally being the stuff of nightmares, the security operation surrounding the four days of protest seemed relatively calm. The biggest clashes came on Sunday when riot police used water cannons, pepper spray and brute force to try and stop 4,000 protesters making their way through woods to the tracks near Dannenberg.

In a 'police-with-morals' shocker, the police have even expressed that they can't be counted on to be the government's lackeys. It has been suggested that many of the officers on the day shared the anti-nuclear sentiment of the protesters. The German police union has stated that they shouldn't have to deal with the fall-out of unpopular political decisions, and besides, they didn't like having to stand out in the cold for up to 20 hours.

Union Chief Konrad Freiberg described an “absolute” lack of support for their efforts, which involved 17,000 officers and cost around 50million Euros. The nuclear companies won't foot a penny of this bill- leaving anti-nuclear taxpayers even more pissed off.

Also in SchNEWS 747: Losing Their Faculties - Students vent their anger at education cuts with major riots at Tory headquarters. | Raven Mad For It - Coal Action Scotland strike again to protect the Douglas Valley from open-cast coal mining. | SchMOVIES DVD Launch - 'Raiders Of The Lost Archives' DVD launches in London and Brighton | Squat Crackdown, Bristol Fashion - Squats around Bristol's Stokes Croft under threat of eviction. | All Party'd Out - Outcomes for those arrested earlier in the year at the UK Teknival | Got The Hump Back - Global day of action against whaling sees protest outside the Japanese Embassy in London | Mexico: Day Of The 10,000 Dead - The narco-wars in Mexico has claimed 10,000 lives this year alone. | And Finally - A protester at Wednesday's students riot finds a hallowed building to urinate against.