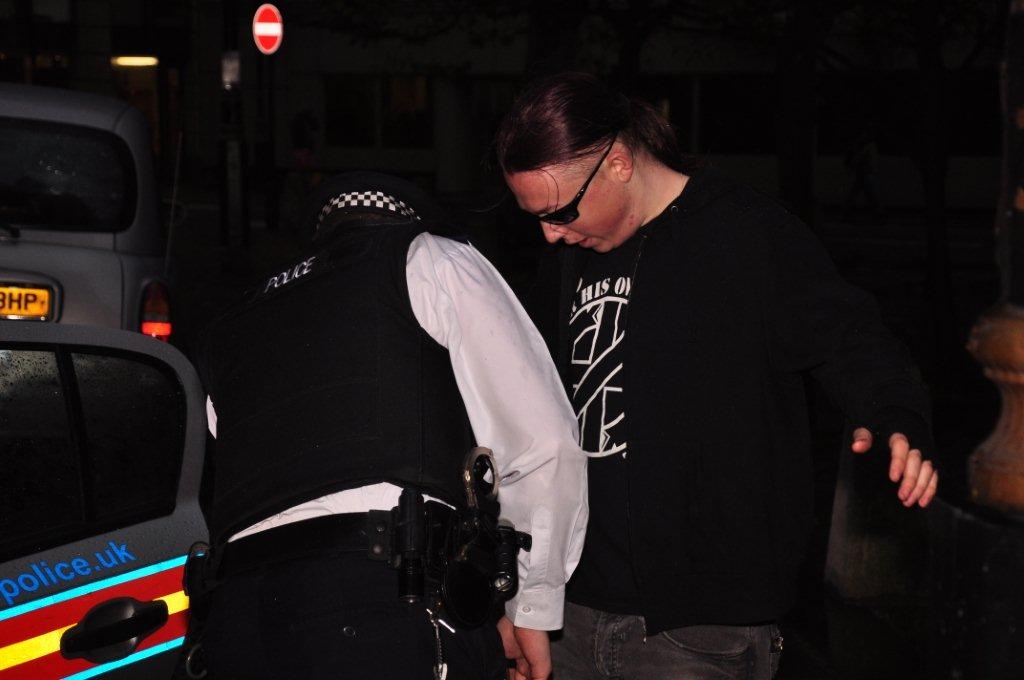 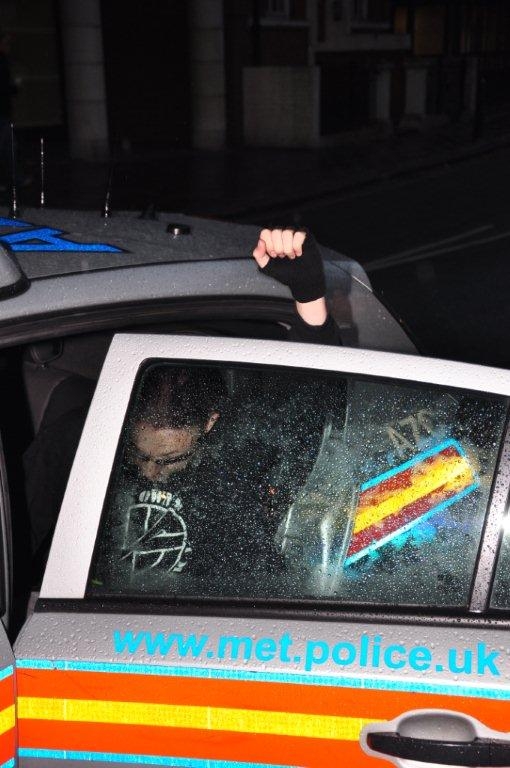 On Friday 12 November, people from various leftist groups and organizations turned up at the south Korean embassy in London to stand in solidarity with south Korean workers, G20 protestors, prisoners and all anti-G20 activists from across the globe who took part in the G20-protests in Seoul, south Korea on 11-12 November and condemn the Lee Myung Bak fascist style puppet regime of south Korea for it brutal onslaught on south Korean workers and their rights.

Protestors handed out anti-G20 fliers to the passing public highlighting the issues.

However from the very start of the protest, south Korean officials of the embassy took a hostile stance towards the protest being held outside the front door of their embassy. Their armed security personnel immediately came out of the embassy and stood at the front of the entrance looking very uneasy and brandishing firearms in full view of the people lawfully protesting. Thus it appears they are so very worried about protestors handing out a few fliers, they now feel the urgent need to brandish firearms about the place to try and intimidate protestors and keep them away from the puppet embassy.

The British diplomatic police (also armed), as usual, were called in and were soon lording it over the protestors and throwing their weight about in less than 10 minutes, by ordering people to move to the other side of the road to their ‘designated’ protest area (10 metres away). The recent Millbank Tower Tory HQ riots are still fresh in the minds of the UK police force. Hence their fear of a possible repeat of those events at the south Korean embassy had enough people turned up. The police told us that the south Korean puppet officials had said that they were feeling very intimidated and harassed by our presence outside the embassy. That was the UK cops’ pretext to get us all arrested if we didn’t move. Is that also the reason why the south Korean embassy security felt the need to brandish firearms at the protestors? That they felt intimidated by people handing out fliers outside their front door? No, it is because they want to frighten us from protesting in larger numbers outside their puppet embassy in future. They think they can use the same vicious underhanded gangster-style tricks that they use against their own people of south Korean against protestors in Britain. A far cry when one considers how the south Korean puppet authorities use their tried and tested method of tear gas and brutal crackdowns and repressions against south Korean labour activists, civic organisations, or anyone who dare utter a word of sympathy in relation to North Korea. One south Korean member of the organisation ‘Solidarity for Implementing the South-North Declaration’ was inflicted with a 2 year prison term on November 8, on the charge of violating the draconian National Security Law of south Korea. He was sentenced for two years behind bars, charged with possession of ‘enemy-benefiting’ music CD-s praising the North of Korea (DPRK).

We initially refused to move and remained standing right outside the entrance of the embassy on the pavement (public highway) until the very last minute, when we were almost certain we were all going to get arrested under Section 14 (5) of the Public Order Act. At that point, we decided we would shift slowly over to the other side of the road and begin condemning the south Korean regime via a large megaphone so that the embassy staff could hear us loud and clear. Better to be there and piss off the south Koreans for a few hours, rather then give them the full satisfaction of having us removed completely from the embassy area in the back of a police van to the delight of those inside the puppet embassy.

One courageous protestor decided to remain defiant and risking arrest and receiving a Level 3 fine of maximum of 1000 pounds as punishment, refused to obey police orders and continued to stand right outside the embassy and continue handing out anti-G20 fliers. He was being harassed by the cops as usual and threatened with arrest if he did not move to the other side of the road to join the rest of us. But he remained defiant

The protestors condemned the UK cops for their own behavior in general, as well as the government agencies of south Korea for conducting crackdowns on undocumented migrants, during which migrants are brutally arrested, illegally imprisoned and then deported. The authorities of south Korea were also condemned for the detention and expulsion of several Philipino G20 activists. South Korean Police had been carrying out illegal and racist stop and search procedures just before the G20 Summit on whoever they think looked ‘suspicious’ or had ‘dark skin’. The government at the same time is continuing to carry out devastating attacks on south Korean workers, activists, labour unions and civic organisations

The demo called for the release of all south Korean prisoners, jailed under the draconian National Security Law. They condemned the south Korean embassy staff in London for brandishing firearms at the protestors who had the lawful right to be there outside the embassy, and demanded the dissolution of the brutal NIS (south Korean Secret Police) of south Korea. The G20 was condemned by the protestors as a bunch of crooks, by accusing them of attempting to make the world ‘safe’ for neo-liberal capitalism by forcing emerging economies to shoulder part of the burden of the crisis, promoting trade and investment liberalization dressed up in ‘new robes’, negotiating weak financial reforms that largely allow financial speculation to on unchecked and reviving the ailing IMF and other IFI-s, and this agenda being pursued despite the fact that neo-liberal capitalism is clearly a failed model, which only increases poverty and inequality around the globe.

Whilst this was going on, the courageous and defiant protestor handing out fliers and refusing to move to the “designated” protest area on the other side of the road and under threat of arrest or even worse (had south Korean security staff at the embassy opened fire on the protestor), was indeed arrested under section 14(5) of the Public Order Act (causing harassment, alarm or distress) ….i.e. and in this case, also for disobeying a legal order made by a senior police officer. He was driven off in the back of a cop car under the loud megaphone chants of “NO JUSTICE, NO PEACE, - FUCK THE POLICE!

At the police station, the police initially told the arrestee that he could be held until Monday 15 Nov if they could not have got him into court on Saturday 13 Nov. At midnight on Friday 12, luckily, he was released after been cautioned. Whilst being held for nearly 10 hours, he was also quizzed by the cops in an interview room, and asked about what happened outside the embassy and who the organizers of the event were in the interests of information gathering.

“NO COMMENT” was the response given to all questions by the brave and trusted comrade.


Well done to everyone who turned up on the day!

CAPITAL KNOW NO BOUNDARIES, SO WHY SHOULD WE.

FREEDOM TO ALL LABOUR ACTIVISTS AND POLITICAL PRISONERS IN SOUTH KOREA AND ACROSS THE GLOBE!!

And finally,
TO ALL SOUTH KOREAN EMBASSY PUPPET SECURITY PERSONNEL AND THEIR SOUTH KOREAN NIS AGENTS IN LONDON!

We say,
IN THE INTERESTS OF NOT TURNING UP THE HEAT AND AVOIDING A FLARE UP IN YOUR EMBASSY AREA, YOU HAD BETTER KEEP ALL YOUR FIREARMS AT BAY AND OFF THE STREETS OF LONDON, AND STOP BRANDISHING THEM AT PEOPLE WHO LAWFULLY PROTEST THE FASCIST-STYLE BRUTAL LEE MYUNG BAK REGIME OUTSIDE YOUR PUPPET SOUTH KOREAN EMBASSY!

WE ARE NOT INTIMITATED AND WILL NOT BE INTIMIDATED BY FIREARMS BEING BRANDISHED BY A BUNCH OF THIRD RATE CROOKS AND AGENTS OF THE TREACHEROUS LEE MYUNG BAK PUPPET REGIME OF SOUTH KOREA RESIDING IN THE SOUTH KOREAN EMBASSY IN LONDON!