Everyone to the streets-London24th November. The fightback continues.
March from Hyde Park corner to Trafalger Square and be ready for action. 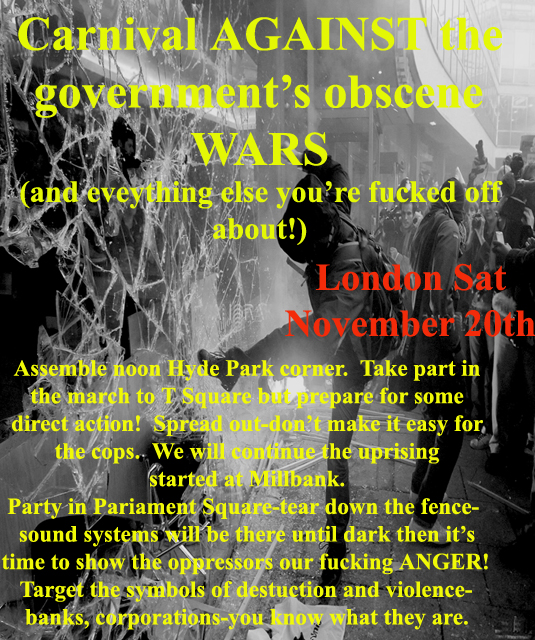 Carnival against the coalition of scum!

Following the great outburst of anger of students at Millbank we must not lose momentum.

Everyone but the rich and their protectors are being abused by this coalition of scum they call the government. We will not wait months for another fucking union A-B march which achieves absolutely nothing.

We will fight back now! Fuck the rich! Fuck the cops! Everyone to the streets on Saturday November 20! We will party in Parliament Square and if the cops try and stop us with their usual violence-WE WILL FUCKING DEFEND OURSELVES!

Unite against the bastards-whatever you call yourselves-student, worker, poor, Muslim, anarchist, socialist, communist, human-these fucking scum are destroying us and our planet-FUCK THEM!

Fucking politicians come on TV and call a few smashed windows violence. Yet they send a bunch of terrorists called troops to murder and destroy entire countries-all in the name of profit. We protest their violence and are met by armed thugs with batons and shields. Self defence is not violence. Property damage is not violence.

Join the Stop the War march but not as a block-Hyde Park Corner-Noon. Go as groups or individuals. Take different clothes to change into away from the cameras. Hide your face! Be prepared at any stage during the day to take direct action. Ignore the stewards-they work with the cops and Stop the War are a government front to keep the fucking wars ongoing by stopping meaningful Direct Action.

On the march pull down barriers-block the polluting traffic that makes us sick.
Word is spreading – there are many of us going to this and we are ready for real action.

Reclaim Parliament Square and then the streets of London!

GET FUCKING ANGRY-THEY ARE DESTROYING OUR LIVES AND OUR PLANET!

WHEN DARK TARGET THE BANKS! They fund the destruction and wars and steal your money.
This is only the beginning (next 24th Nov, 4th Dec)-RISE UP!
Spread the word!
Feel free to make your own poster, rewrite and circulate. Put it on facebook or twitter or whatever.