In the last few minutes, students at The University of Plymouth have secured a room in the universities famed Roland Levinsky building which is to be held under occupation in protest against the Coalition Governments plans to slash education funding to and increases in tuition fees. 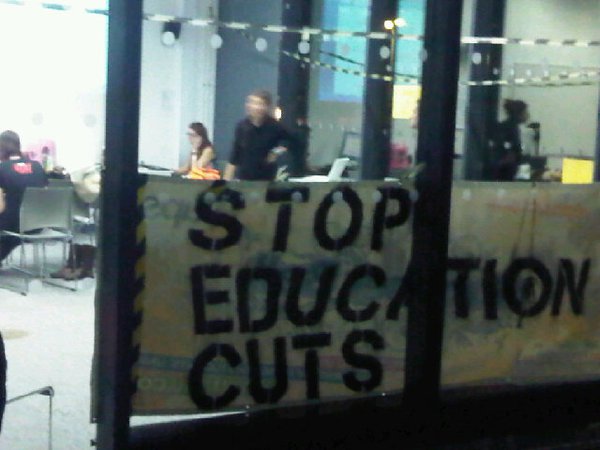 Banners up and Ready for National Day of Action Tommorow.

For Immediate Release 23/11/2010 17:15
PRESS RELEASE:
Students Activists Occupy Teaching Room at University of Plymouth
In the last few minutes, students at The University of Plymouth have secured a room in the universities famed Roland Levinsky building which is to be held under occupation in protest against the Coalition Governments plans to slash education funding to and increases in tuition fees.
Tomorrow, Wednesday 24th November, ‘The National Day of Action’ or ‘Day X’ will see actions and stunts staged at schools, colleges and universities across the country. Student leaders are predicting sit-ins, demonstrations and occupations in protest at plans to raise tuition fees and scrap the education maintenance allowance [EMA].
The changes to current further education and higher education funding proposed by the Coalition Government in David Willets, Education Minister’s, latest speech in response to the Browne Review could result in:
• A minimum cost of tuition fees of £6,000 per year, with universities able to charge up to £9,000 without incurring a penalty or levy.
• Students graduating with mortgage size debts of over £50,000.
• Public funding for subjects other that Science, Technology, Engineering or Maths (STEM) subjects being completely scrapped, with 100% of the cost of the degree being passed onto the graduate and funding for STEM subjects also suffering severe cuts.


Emma Wilson, Vice President Education and Welfare at The University of Plymouths Students’ Union said; ‘The coalition proposals to cut funding and expect students to foot the massive hike in tuition fees is disgusting. Students here feel strongly enough to stand up and be counted and demand that their university discloses certain information such as exactly how much tuition fees will increase to and a guarantee that Widening Participation will not slide down the universities list of priorities.
A Student involved in tomorrow’s action said ‘This is a really important national awareness event to show the coalition that we will not take these cuts and fee increases lightly. As well as this on a local level it allows us to get answer from the university which we have previously been denied.’
Students at the University of Plymouth are being encouraged to meet outside their library at 11am tomorrow with banners, chants and loud voices for a rally on campus followed support for those occupying the space on campus which will function as a safe space for discussion, debate and teaching about the far reaching implications of the governments proposals to alter funding to the education sector.
The occupation is set to continue until a formal response from university management and the Vice Chancellor Wendy Purcell is received.
The University of Plymouth Students’ Union will be supporting these students in their negotiations with the university.
Wednesday 24th November 2010
Debate: What is Education For? 6pm
Film: Taking Liberties 8pm
ENDS
For More Information: contact 07967 or email:

We would like to state this is a non-violent and peaceful occupation protest of the cuts and proposed rise of Tuition fees for Further and Higher Education by the coalition government.

We have the following demands to the University of Plymouth and request a written statement in response to the following before we agree a satisfactory end of the occupation.

We will only accept a written response to these demands and will remain until we agree that the demands have been met satisfactorily and assurances that they will be upheld.


Our intention is not to interrupt the studies of fellow students or lecturers and welcome support from those who wish to join us or join the rally. We will be planning informational events, debates and visual material during the occupation.
These will be listed on facebook-

We Invite students, staff, interested parties to join us and express your support by making a statement for us to display, there will be a petition for support to be sent to Downing Street.

We would like to state that Universities are places of education and should not be privatised and are not businesses. This would be detrimental to the cultural fabric and structure of communities nationwide.

In solidarity we unite…