Students across the UK are taking direct action against the double whammy of 300% tuition fee rises and huge cuts in higher education funding. 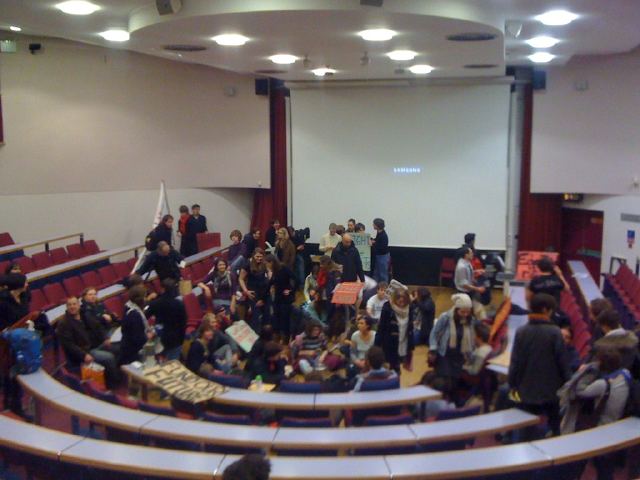 The occupation at Warwick

The actions - which are beyond the control of the National Union of Students bureaucracy - have largely been organised via social networking sites such as Facebook and Twitter, as well as personal messages. In contrast to the spontaneous breakout of direct action witnessed at Millbank Tower twelve days ago, this day has been planned for some time, so the most tech-savvy generation in history is showing one of its greatest strengths - its capacity for self-publicity, something which by-passes (and occasionally feeds into) the corporate media.

So far, occupations of university buildings or rooms have been announced at the London School of Oriental and African Studies, Manchester Met, University of the West of England, Royal Holloway, Birmingham, Plymouth, Warwick, Essex, Leeds, and London South Bank. Doubtless more will follow in the coming hours.

For the students taking part - or even going about their usual business on campus - these occupations will now be transformed from classrooms of hierarchy-based learning to classrooms of class struggle. Over the next few days, these occupations will take different paths. Perhaps some will win concessions from university management. Others may well descend into in-fighting as the noose tightens. Others could be overwhelmed by police repression. But the real value of these occupations will be in helping to create a culture of resistance, and as an object lesson in how corporate institutions and the capitalist state combat such resistance.

In these times of savage cuts and austerity as dictated by international finance, the students cannot win free education on their own. This can only be achieved by the working class as a whole, as part of a project to transform society for the benefit of all.