Today in Cambridge, on November 24th, 2010 the ante was well and truly upped by several hundred very angry and frustrated students, when not only did they take to the streets in protest against the ConDem'med government's plan to raise tuition fees up to at least £9,000 per year, but they also took direct action and occupied the front lawn of Cambridge University's Senate House for several hours. 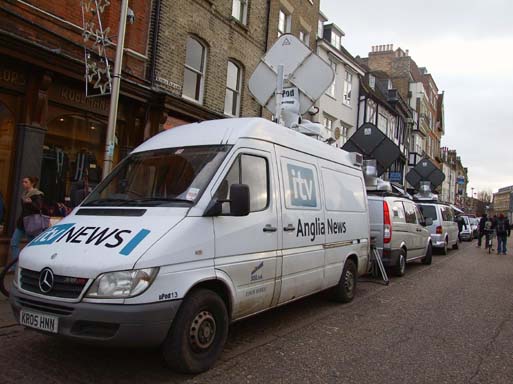 Local and national media were watching... 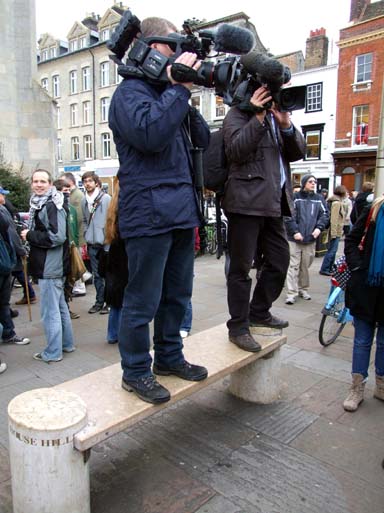 ...Some a bit closer than others! 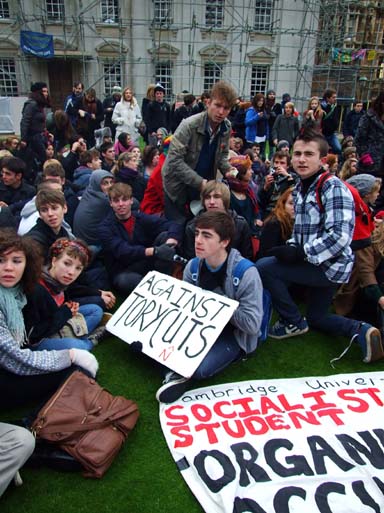 The faces of the next generation... 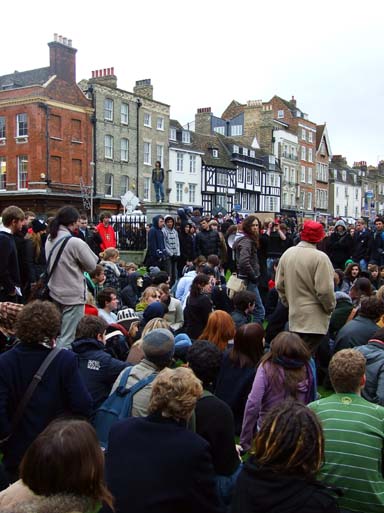 ...And they're already angry. 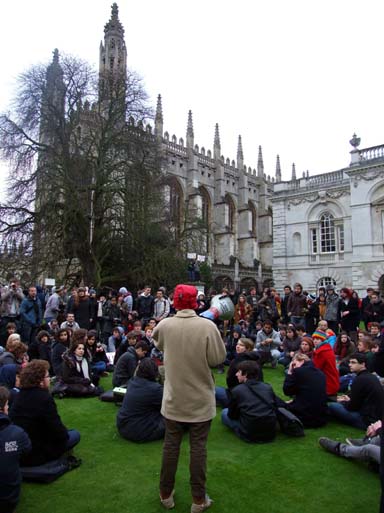 Surrounded by riches, but forced into poverty. 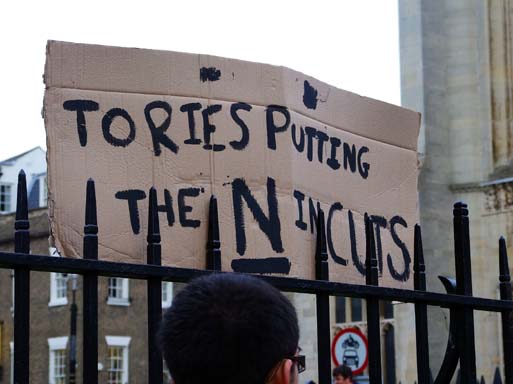 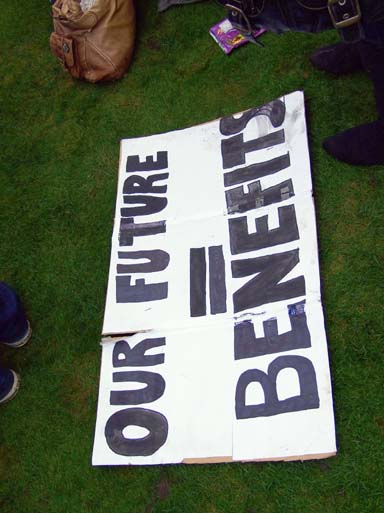 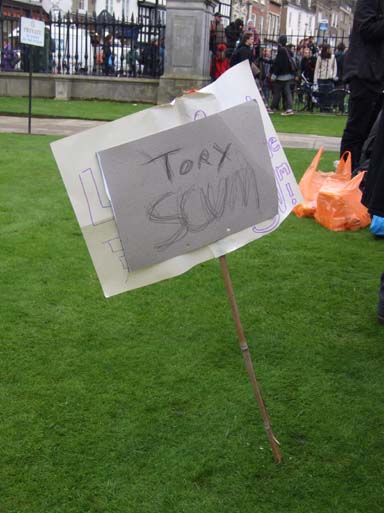 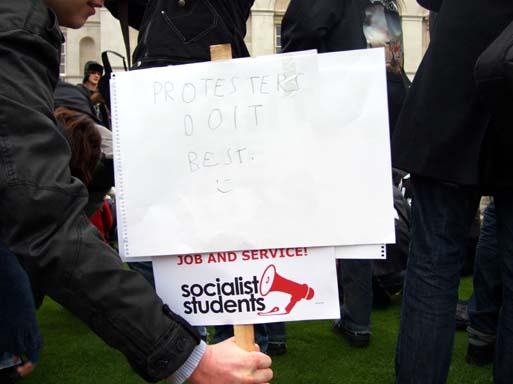 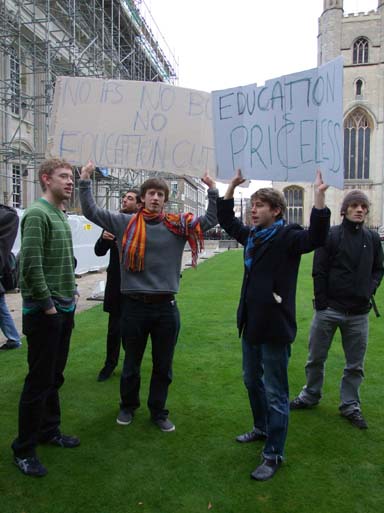 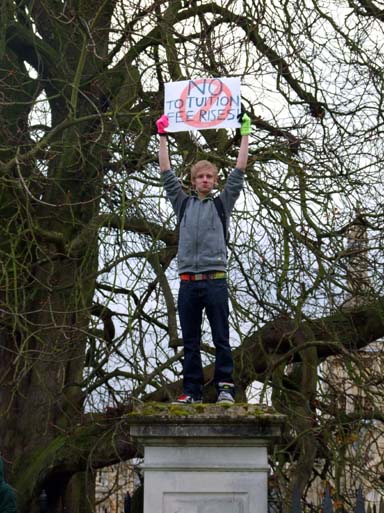 Human Art #2, standing atop a column. 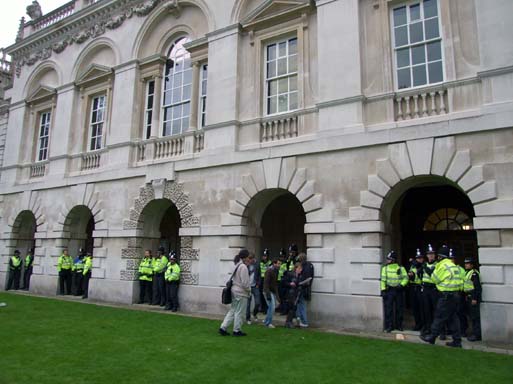 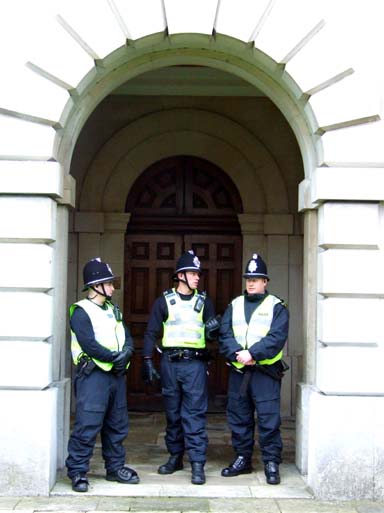 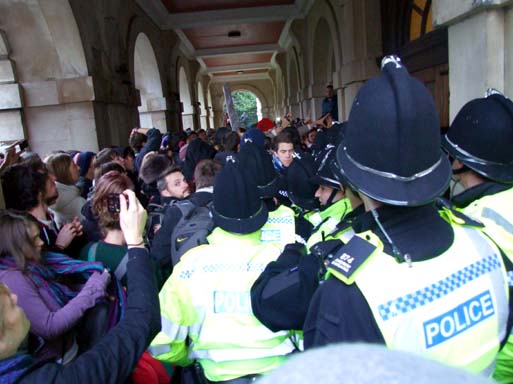 Despite the best efforts of students to get in themselves. 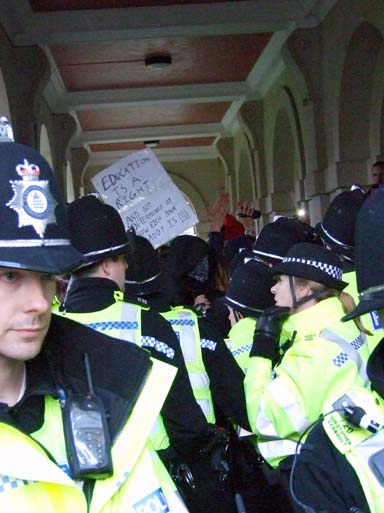 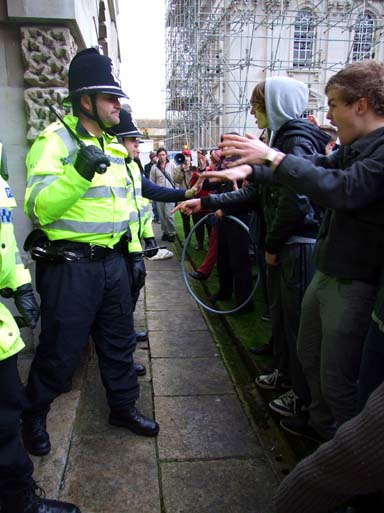 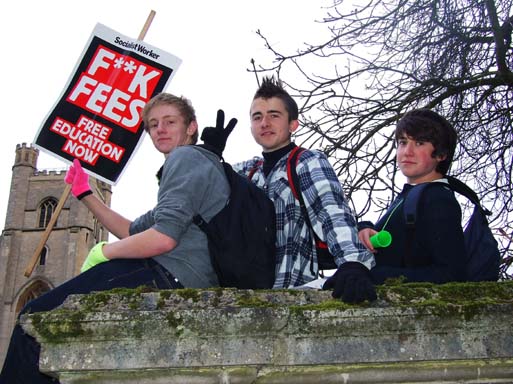 Thanks for the pose guys, you're stars. 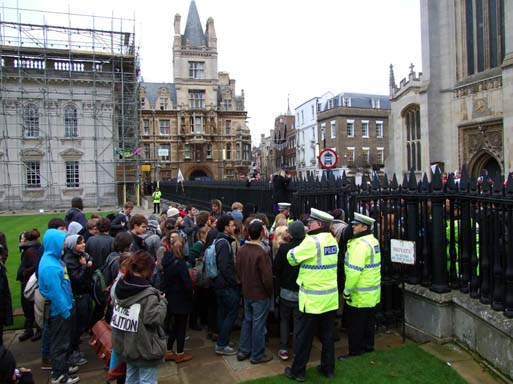 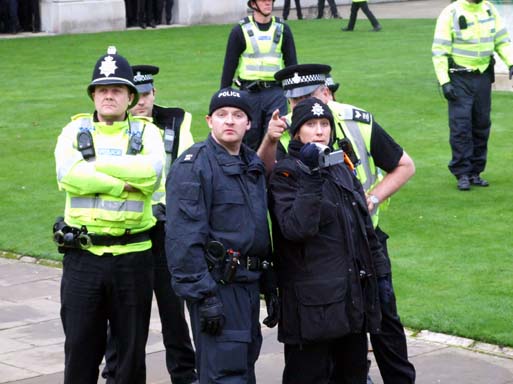 F.I.T. were present - what were they expecting? 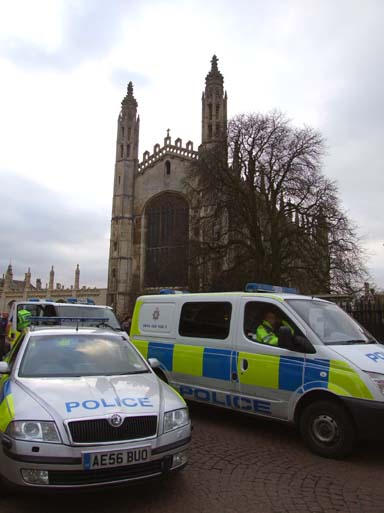 Something the tourists don't see.

Due to the sheer weight of numbers, the Police and Proctors were powerless to stop the mass invasion of the Senate House grounds, although when many of those present decided to try and rush the front entrance of the building with a view to entering and possibly occupying it, for the first time since the beginning of the the Iraq War, I saw police in Cambridge drawing batons against unarmed protestors.

Arguably Senate House did end up being occupied, but by ranks of baton wielding police - something of a first in recent times, and quite bizarre to see, as the those famous arches usually have smiling graduates wearing mortarboards walking beneath them.

F.I.T. (Forward Intelligence) teams were also in evidence, perhaps with a view to scouting out the next generation of activists (?), as apparently, along with sixth formers and undergraduates, it transpires that some students had also walked out of school lessons as well.

This too has not happened since the heady days of March 2003, the peak of the protests against the Iraq War.

However, two arrests notwithstanding, the police seemed to show more restraint (in some respects) this time, although I did see a few students being manhandled in the crush at the doors of Senate House.


A word to the wise: a GUARANTEED way of disenfranchising the next generation of young adults is to have them being mauled by heavyhanded police.


The end of the occupation came when it was collectively agreed that all present would leave the grounds of Senate House en masse, so that there would be no further opportunity for the police to pick off/arrest any stragglers.

As many of you will know by now, the simple fact that this happened at a world reknowned centre of learning (a so-called 'Oxbridge' city) means that the actions of the few have already been flashed across the country to the many watching at home.

Let's hope that the actions today will serve as a warning to the people in Whitehall (and Millbank) that the collective message is clear:

We will not take these cuts and tuition fees lying down, we will fight you all the way.

This issue is rapidly becoming this generation's Poll Tax, and like that other notorious levy on the poor, tuition fees could also bring down a government.

You have been warned Clegg and Cameron.

And while we're on the subject, I have a short message for the N.U.S.

Come out from your ivory towers, step off the pedestal of your moral high ground and show a little solidarity with your members, because you're currently in danger of completely losing credibility with a whole generation of students.