A brief history of "kettling"

The politics and practicalities of policing tactics on major domonstrations 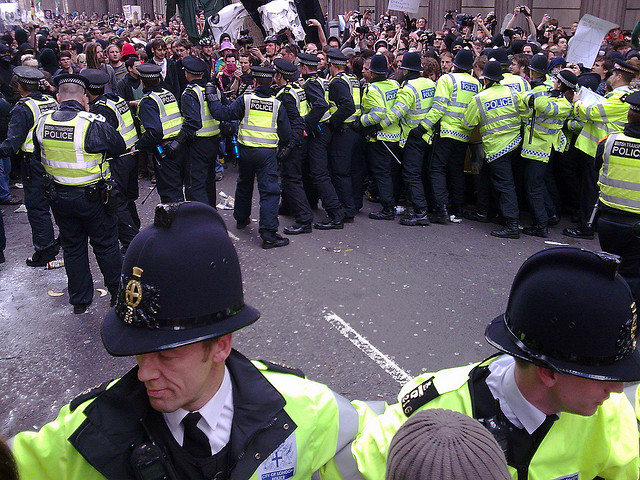 The police tactic of “kettling” was first used at N30, the anti-WTO summit protest at Euston station, London, November 1999. It was introduced after the disastrous policing efforts during J18 (Carnival Against Capital) some months previously where anti-capitalists and anarchist demonstrators roamed free throughout the city of London causing mayhem as part of the global protests against the G8 summit.

The process of kettling involves lines of police forcefully corralling people together into a space then surrounding the whole group on all sides preventing them from leaving the cordoned-in area. Any attempt by people to leave the cordon would result in physically being attacked (usually with batons, often riot shields, boots and fists) in order to preserve the kettle. Detention in this manner would last several hours. After people have become bored, tired and cold they would be released in a controlled fashion, usually one person at a time, after being searched, photographed and had their names and addresses taken.

So successful was the kettling tactic it was implemented at all future potentially inflammatory ‘mass demonstrations’ as a method of controlling, subduing and ultimately criminalising protestors. (Early kettling procedure went hand in hand with the misuse of ’section 60′ order whereby police took the personal details and pictures of all those in the kettle for their database).

Although not defined in law (it still is simply a police tactic) it was given the green light by the High Court after some protestors questioned the legality of their seven hour kettling in Oxford Circus on Mayday 2001. The courts ruled that the police could under certain circumstances detain people against their will for long periods of time to prevent outbreaks of violence and criminal acts – and typically a breach of the peace. The example they gave was the detaining of football supporters in the ground while opposing fans left the area.

In terms of the practicalities of the law it’s an absolute sham and the judges who made the ruling know they got away with a large dose of bullshit. But it also meant the police could continue the tactic along with all the violence and thuggery that goes with it under the protection of the law.

The anarchist group the Wombles developed a strategy (borrowed heavily from the Italian radical left movement Tutte Bianche) of wearing padding and protective headgear and using re-enforced banners to break through police lines on demonstrations.

While this proved very effective in the short term – the police had no idea how to handle such a disregard from their authority, it had to rely on everyone else adopting the same strategy of forcefully breaking out of the kettle to be truly successful. In the end it was seen as vanguardist (by the left, without a hint of irony) or too specialised to be universally adopted by everyone.

The real purpose of the kettle is to ensure people are dissuaded enough not to attend future protests – the law of diminishing returns – which actually succeeded throughout much of the 2000s. This generation of protestors from what we’ve seen, aren’t going to be that easily put off.

Implications of “kettling” and the contradiction of European human rights legislation:

I don't want to give my name

A question for people who know the law-is there some website you can point me to?
If you are kettled do you have to give your name and address and let them photograph you?
What if you don't and you have no ID-can they arrest you? And if they do arrest you and you still refuse to name yourself what do they do?

"The anarchist group the Wombles developed a strategy (borrowed heavily from the Italian radical left movement Tutte Bianche) of wearing padding and protective headgear and using re-enforced banners to break through police lines on demonstrations".

And full circle back to Italy again in 2010. See the amazing and creative Book Block tactic from the student demos in Rome last week. Activists painted up a load of shields as famous books to be used as a way to break police lines. Not only were the books useful in that respect they also were able to demonstrate symbolically what the protests were all about when the police began to baton charge and beat the giant books! A great tactic - practical and highly poignant!!

I questioned the legality of what police were doing, holding people who have comitted no crime against their will and they said, it was "Common Law" - I suggested they made that up... The same police who told me we were being 'kettled' to "prevent a breach of the peace" then drove horses though young people who had been begging/fighting to LEAVE for hours.

Check this out for legal advice