How To Break The Kettle: An Illustrated Scientific Guide

Wedges are really a kind of inclined plane. A wedge is two inclined planes back to back against each other. The mechanical advantage you get from a wedge depends on how thick it is. A thick short wedge will split things apart faster, but you'll have to use more force. A thin long wedge will be easier to drive in, but it will take longer to split something. Today we have many different uses for wedges. 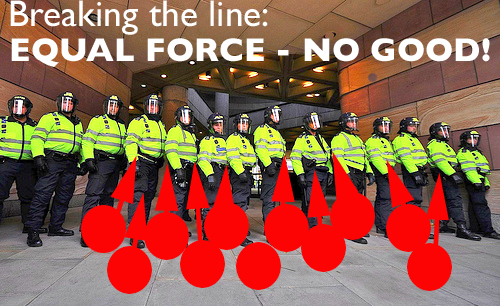 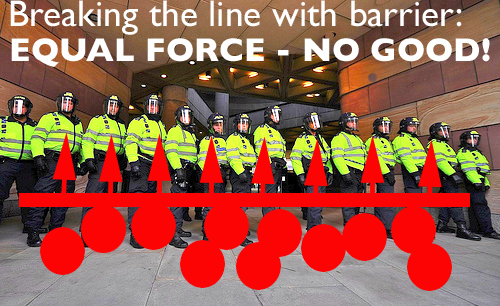 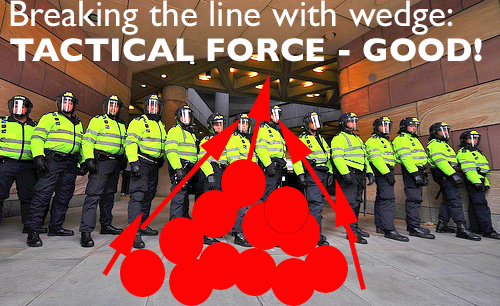 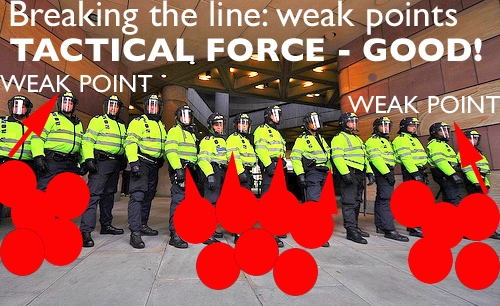 Sometimes life present us with a problem that we cannot solve without the use of a classic piece of scientific thinking. In today's puzzle, we are trapped in a kettle, surrounded by police officers and we want to get out of it. We have tried shouting en masse 'let us go!' but this has not worked for us. Next we need to do some collective thinking and put a new plan in effect.

The first thing we should do is look for which police line seems the weakest and with the best chance of escape should we break the line. This may be a line of normal cops without riot gear and usually only one officer deep. Here how the work might proceed.

In Fig 1 we see the crowd attempt to break the police line by using opposing force. This can sometimes work but usually the police can brace themselves and hold each other and thus hold the line. In this way, the strength of the crowds' force is lessened and absorbed by the police line.

In Fig 2 we the crowd attempt to get technical and use a banner or metal barrier to push the police. The same dynamic occurs again and the crowds' force is lessened and absorbed by the police line.

In Fig 4, the crowd knows that the police line weak points are at the extreme ends of the line as the final policeperson has no brace or support. The crowd attempts two pushes on the line at the weak points.