Screening of Outside the Law: Stories from Guantánamo in Sheffield

Outside the Law: Stories from Guantánamo


Is new documentary telling the story of Guantánamo: torture, extraordinary rendition and secret prisons. Examining how the Bush administration turned its back on domestic and international law, rounding up prisoners in Afghanistan and Pakistan without adequate screening and often for large bounty payments. Focusing on the stories of three prisoners, Shaker Aamer, Binyam Mohamed and Omar Deghayes, 'Outside the Law: Stories from Guantánamo' is powerful rebuke to the myth that Guantánamo holds “the worst of the worst”.

Omar Deghayes (Guantanamo 'Detainee') and Poly Nash (Director) will be present to introduce the film.
The Film will be screened in Sheffield at the Showroom Cinema on Brown St on the 15th December 2010. 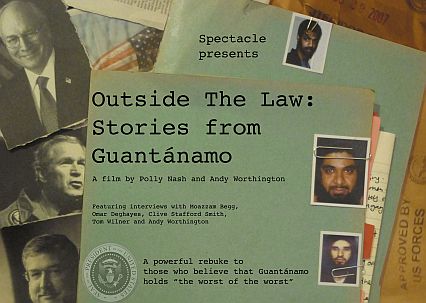 With Omar Deghayes and Andy Worthington.

This screening is organized by Showroom and the Centre for Peace History at Sheffield University.