It is just the beginning! - students against cuts, riot in Italy - November 30th

These days the crisis of the Italian government, that is living an agony since the last two months, was spread over the country: students’ protests, occupations everywhere are unfolding the political crisis. We are facing a multiplication of its dimensions, of its temporalities. 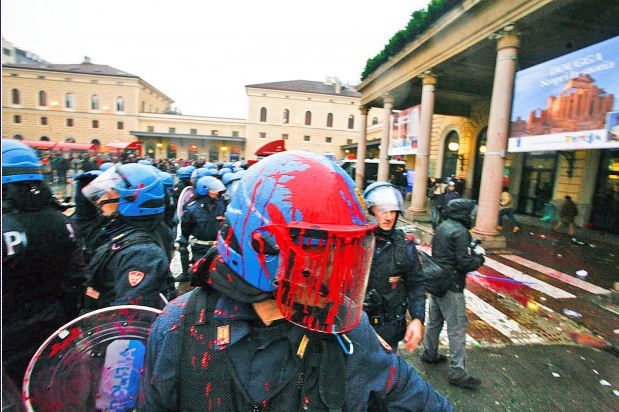 From the «book block» to the occupation of rail stations, airport, port, cities, the Italian student movement is experimenting an original temporality of the crisis: it is a non-linear time, that is a new starting point of resistance against the European austerity.

For the first time hundred of student from high school are beside the university’s student composing a new subject, a new political event.

The clinamen of the 30 of November, as well as of the event at the Milbank tower in London few weeks ago, are fed with the anger of a new generation, their desire and collective organization.

Yesterday Italy was completely blocked by demonstrations that closed motorways, like in Bologna and Turin, where the mobility was blocked for hours.

In Rome students clashed violently with police several time to reach the Parliament, and then blocked the city centre and the main railway station:

The day of 30 November shows us a new kind of protest beyond the rituality: in all over the country the student movement is facing the attempt to organize strikes blocking the mobility and fluidity of the metropolis, its hubs and centre of logistic.

Up to today, many universities are still occupied. General assemblies and meetings are going all over the cities despite yesterday the reform was passed to the Parliament. The next step for this law will be the discussion at the Senate house by 14 of December. But the government probably will not have enough time: we will topple them before: yes, it is just the beginning!