Arresting the War Criminals in UK

Sri Lankan President's gone angry. He is breaking things around his new room wherever it is.
He and many of his war criminal entourage seem to be hiding in Sri Lankan embassy.
How they got transported there or when is unknown.
If he is in there then the only thing that matters is how they escape to airport. 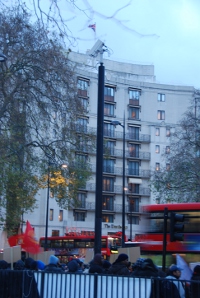 In this case of the Sri Lankan president what is currently happenning in the island far away matters most. The precarious plight of the Tamil homeland currently under complete calmpdown was pockets of open prisons is what matters most. At least to the Tamil protestors demanding Justice freezing out in the cold in two locations across Hyde Park.

In a new twist it seems the main concern of the British authorities is the safety of the British High Commision in Colombo, Sri Lanka. Having issued a statement apologising for the Oxford Union! it seems the golden boy of twisted Sri Lankan politics, Wimal Weerawansa is set to storm the UK High Commission. Last time he did something like this it was the UN headquarters that actually delivered a result - put the UN special panel of investigations on freeze. It was the defence secretary Gotabhaya Rajapakse himself who ordered the Sri Lankan police off for the protest to reach UN buildings.
The UK High Commission in Colombo is facing a huge demo in Colombo tomorrow.

Still the protest demo goes on.
Its freeeezing. There was heavy snow fall earlier.
Some are outside the Dorchester hotel. A growing number outside the Sri Lankan High Commission. There is heavy security in hyde park and north. A Tamil Website suggests the president will be flown by helicopter for a waiting flight out soon as possible.
There is also new of legal avenues being pursued.

Personal opinion is that the UK government and businesses are negotiating what can be clawed back out of the cursed island.