We are at WAR. Political arrests and state terrorism

One day before the memorial of the assassination of Alexandros Grigoropoulos on December 6th, the Greek democratic dictatorship decided to activate in a tragicomic way its repression mechanisms in order to prevent the upcoming uprising of the society. All the regime’s servants are on the alert trying to manipulate the public opinion and terrorize the parts of the society that resist. 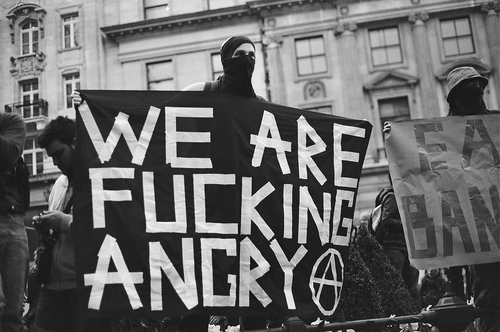 Yesterday night (December 4th), the scums of the anti-terrorist squad raid into various apartments and social spaces in Athens, Piraeus, Thessaloniki, Agrinio and Crete claiming that weaponry was found. The well-paid state media puppets set up feasts for the cop’s “success against terrorism”, producing hysteria and terror. After 24 hours it was announced that the weaponry found have never been used in any attack.

After a full day of deliberate lack of information, in the evening of December 5th the police gave in publicity the names and the photos of the 6 persons arrested in Athens, Piraeus and Crete, asking “citizens” for more information… For the 2 of the 6 arrested persons, there were arrest warrants for the “Conspiracy of Cells of Fire” case.

The same night in Thessaloniki, secret cops and hooded cops of the anti-terrorist squad raid into the occupied anti-authoritarian space “Nadir” which is located in the students residence of Thessaloniki’s University. They seized papers and computers, beat the people inside, while they went on numerous detains and 11 arrests. Dozens of people in solidarity gathered outside the place. The cop’s raid followed after an attack to a private security guardhouse inside the University campus.

Also, cops blockaded streets in Agrinio, near the anarchist “Agrinio Haunt”. The electricity went off in the whole house block with the excuse of the “anti-terrorism raids”.

Junta banned the basic right of the detained and the arrested to contact with their lawyers for more than 24 hours.

Τhe announcement of the defense counsel of one of the allegedly arrested is characteristic:

“What with certainty so far has been disarticulated are the procedural rights of the detainees and the potential to communicate with relatives and advocates. The absolute prohibition on the exercise of their fundamental rights, upon the completion of nearly 24 hours after their arrest, and the denial of confirmation of the names of the detainees, borders on rapture. Contempt is complemented by the usual method of selective leaks and communication manipulation of public opinion. And if all these are happening under the cover of the public prosecutor’s office, the coincidence of the mechanisms of repression not concerning protection, but in the abolition of the legal and constitutional order, is confirmed.

One day before the completion of two years since the murder of Alexis Grigoropoulos, and while the whole society is in turmoil and is being prepared for mobilizations, the guilty State obviously needs to atone, to present successes and mainly to legitimize the authoritarianism which is being prepared for tomorrow’s anniversary.

Zero tolerance! No political and communication intentionality over rights and freedoms!

The defense counsel of one of the alleged detainees”

The students community and many anarchists/anti-authoritarian and far-left organizations are calling for gathering/demo in Propylea, central Athens. There are calls for demonstrations in more than 20 cities throughout Greece.

SOLIDARITY TO ALL POLITICAL PRISONERS

WE ARE AT WAR