Round up of this weekends Tax Dodger actions

In the run up to Christmas, Tax Dodging stores across the country were closed in protest, amid growing public anger over the cuts.

Protests over tax avoidance by big business and wealthy individuals have hit high streets up and down the country today including Topshop's flagship store in Oxford Street, London [2 | 3].

Many also made the connection between these Tax dodging actions and the Student occupations, in Sheffield and Nottingham. 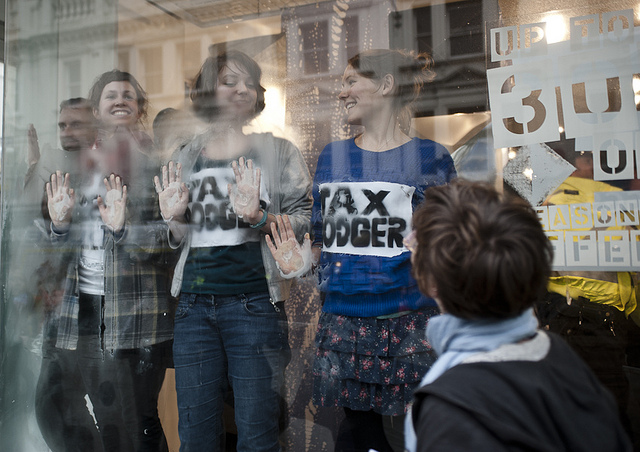 Sir Philip Green's empire Acardia is owned by Taveta Investments Limited - a holding company registered to a small office on the tax-haven island of Jersey.

Sir Philip Green is not however the official owner of Taveta Investments. Instead, the owners are his wife and immediate family, who reside in Monaco.

Monaco is of course famous for its 0% income tax. As a result, when Sir Philip Green - the 9th richest man in the UK with wealth estimated at £4.4bn in 2008 [7] - in 2005 made the largest single dividend payout in UK corporate history to his wife of £1.2bn, he avoided paying a reported £285million in tax to the British public purse.

Amid criticism from key MPs, Sir Philip Green was also asked by the coalition government this year to advise them on austerity and cuts within the civil service.

Daniel Garvin, 26, said "Philip Green is a multi-billionaire tax avoider, and yet is regarded by David Cameron as an appropriate man to advise the government on austerity. His missing millions need to be reclaimed and invested into public services, not into his wife's bank account."