6th December, marks two years from the date of the assassination of 15-year old Alexis Grigoropoulos by special police forces in the Exarcheia district of Athens. Throughout Greece there have been demonstrations. The police have been particularly savage and tonight comes news that they have vandalised the memorial shrine to Alexis Grigoropoulos on Messologiou Street. 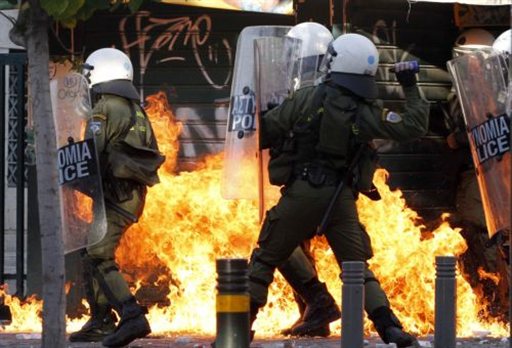 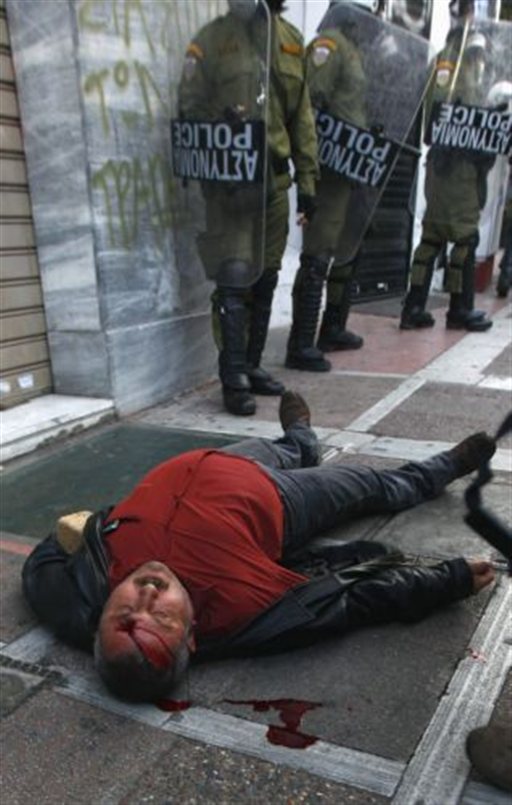 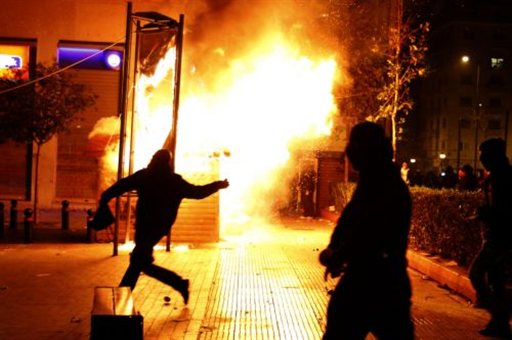 Today in London there was also a solidarity demo for Greek folks fighting back. Despite the call out for the demo at the Greek Embassy, not one mention was made in the call out of the murder and 2nd anniversary demos for Alexis:

'Last Thursday, one thousand Greek students, protesting government austerity plans, marched to the British embassy in Athens in solidarity with British students. On Moday we will gather outside the Greek embassy in a cheerful show of solidarity with them'.

This is really sad. Despite this though, the demo is of course a great act of solidarity. Let's hope the news today of excessive State and police violence against the movement reaches far and wide through the UK movement, so that everyone know what is going on in Greece.


Timeline of events in Athens today:

22:30 (GMT+2) Tension around Polytechnic school and Exarcheia square remains. A large group of people is gathering outside the Athens Police Headquarters where today’s detainees are being held.

22:00 (GMT+2) Clashes still taking place in Exarcheia. Corporate media report that more than 90 people have been detained in Athens today.

21:30 (GMT+2) Police brutally attack the commemorative gathering on the spot where Alexis was assassinated. The police forced the gathered people away from the shrine. One person has fainted. The gathered people are no marching towards the Polytechnic School. Tear gas and stun grenade bombs thrown by police

21:03 (GMT+2) The memory gathering in Messologiou Street in Athens has just started. Hundreds are already there while more are on their way.

20:05 (GMT +2) People have been concentrating all evening at the spot where Alexis Grigoropoulos was shot in 2008 in the Exarcheia district. At the moment barricades and clashes with riot police in various streets of Exarcheia, but as it seems in other parts of Athens’ centre are taking place. According to reports on Athens IMC, a few minutes ago the police threw tear gas and stun grenades to people concentrated in Messologiou st. exactly where Alexis was shot two years ago. At 21:00 a commemoration gathering will take place there.

Police have attacked demonstrations in other cities such as Giannena, Agrinio and Volos, but demonstrators defended the protests, yet several people (many high school students as it seems) have been detained or arrested.

19:40 (GMT+2) There is tension in the centre of Athens, where police attacks to protesters who remain in the streets while they are pushing groups of protesters towards various directions. The police attacked demonstrators in Syntagma Sq. while at the moment clashes take place in front of the Polytechnic School.

18:00 (GMT+2) According to posts on Athens Indymedia there are several thousands of people in the streets of Athens at the moment. Police surrounded several demonstrator blocks and attacked to the demonstration a number of times, notably a harsh attack against the block of the Athens Law School students’ took place, now several demonstrators are in the building of the Law School. There were some clashes in front of the parliament and it seems that molotov cocktails were thrown to the police lines in front of there.

16:20 (GMT+2) The demonstration in Athens have been effectively banned. charging at the first people who gathered at the University’s Propylaia police have now pushed a large demo block. Hundreds of people keep gathering, effectively behind the police lines.

15:55 (GMT+2) Main demo has not even started, but clashes with the police have. Riot police have surrounded the university of Athens where the pre-demo gathering was taking place.

13:45 (GMT+2) The joint student/teacher demonstration in Athens just ended. In the spirit of December, students pelted the police with oranges. We are waiting for the main evening demonstration to start.