Dumping dead fish in the sea

Every year, fisherman dump half their catch back in the sea as dead fish! 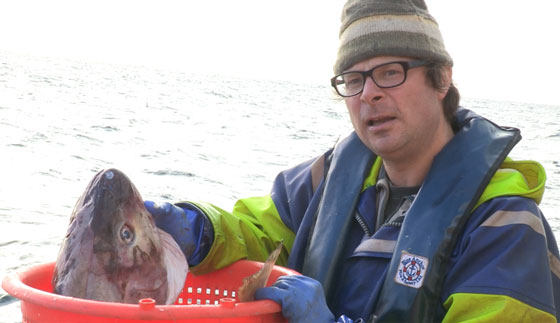 Hugh Fearnley-Whittingstall with North Sea cod destined to be discarded

Every day far out at sea half the fish caught in the North Sea are being thrown back dead. That's almost a million tonnes of edible fish every year - wasted. Fishermen hate doing it, but EU law says they have to. They call it "discarding". What would you call it? Madness? An environmental crime? A senseless waste of good food? We want to stop it.

According to an EU paper in 2007, between 40% and 60% of all fish caught by trawls were being discarded.

Discarding is not limited to the North Sea, its a massive problem throughout EU waters. Some of these discards are undersized fish, and some of them are species for which there is currently little market. But much of it is "over-quota" fish: prime cod, haddock, coley, whiting, plaice, and other major food species, for which the fishermen have run out of quota.

But in the pursuit of other fish for which they do still have quota, they cannot avoid catching large numbers of the "wrong" species. It's an inherent problem in what is known as a "mixed fishery".

The fish are being thrown away because to land them would be illegal. Only a tiny proportion of these fish will survive. For obvious reasons, fishermen hate discards. Conservationists hate them too.

Even politicians don't like them. But they are an unavoidable consequence of the current Common Fisheries Policy and the quota system. The very same rules that have been devised with the aim of protecting stocks (principally quotas and minimum landing sizes) have become the reason that so much fish is being thrown back into the sea.

Dumping dead fish is a consequence of the EU Common Fisheries Policy (CFP). The coasts around Britain should never have been opened up to the EU as it does not help conservation. We have the Law of the Commons, a free-for-all where each country tries to maximise its catch in our waters, with the net result that the fisheries are overfished and small fishermen, the in-shore fisherman, the ones who do not cause the damage, are put out of business.

We need to claim back our waters, then put in a sensible fisheries policy. This would limit number of days at sea, closed areas, limits on total catch and limits on fish size. Without which our fisheries are doomed to collapse. And once they have collapsed, they are usual not restored as they found off the coast of Newfoundland, as other fish move in the exploit the vacated ecological niche.

It is not only British Fisheries that have been destroyed by the EU. EU subsidises huge factory ships to fish off the coast of Somalia. This has destroyed their in-shore fisheries, same as it has done off the British coast, fishing that was sustainable, to be replaced by unsustainable industrial fishing. The Somali fisherman who were forced lay up their boats, now engage in piracy. [see Somali-argh]

The CFP is under review and due to be reformed in the coming months. The fish fight campaign has been launched with the aim to influence this reform.

To tie in with the fish fight campaign, Hugh Fearnley-Whittingstall of River Cottage will have a TV series Hugh's Big Fish Fight (programme 1) on Channel 4 starting in January 2011. It will also look at the scandal of salmon farms and the environmental issues surrounding the global tuna fisheries. Whether it will look at I do not know, but another scandal is that of shrimp farms.

Three years ago, Hugh Fearnley-Whittingstall looked at the scandal of factory-reared chickens, with an assocoated Channel 4 TV series Hugh's Chicken Run. Now it is the turn of fish. [see Chickens, Hugh and Tesco too and Pecking orders]