Open letter to The Guardian and the Careers Group, University of London

As part of the Ban BAE campaign there was a peaceful protest at the The Guardian London Graduate Fair on the 19th October against the presence of BAE Systems. We have now written to The Guardian and the Careers Group who are responsible for this event lobbying them to Ban BAE from future events. 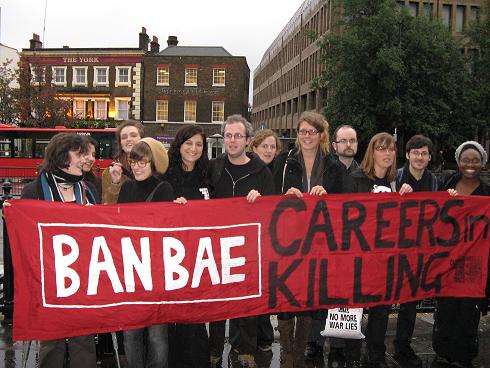 United under our banner after protesting at the careers fair

The Guardian London Graduate Fair, organised jointly with the Careers Group, University of London, is an annual event which provides many students with a valuable opportunity to talk face-to-face with potential employers.

However, this year, BAE Systems – the world's largest arms producer – were allowed to exhibit at the fair and attempt to recruit graduates. Peaceful anti-BAE protesters, many of whom were students, were forcefully removed by security. BAE is beginning to expect opposition wherever it goes.

Both The Guardian and the Careers Group must refuse to host BAE Systems again.

The Careers Group, University of London, services students from many educational institutions and states on its website that “as an Exempt Charity, income earned...goes directly to improving and developing services for students of the University of London”. In total its activities bring in over £2.5 million. But students have made clear that they do not want their education or career development funded in any part with money from the arms trade.

The decision to accept money from BAE Systems undermines the recent efforts of students at various University of London colleges to sever the links between the arms trade and their universities (for instance the Disarm UCL campaign which last year resulted in success for student campaigners when the university announced it would divest from the arms manufacturer Cobham.)

It also contradicts The Careers Group's own Code of Practice, which states that it “reserves the right not to advertise vacancies for employment of a nature it deems might be liable to bring the University into disrepute.” Continuing to host BAE Systems – a company which has admitted to poor ethical standards and to charges of false accounting and making misleading statements in relation to allegations of corruption, resulting in a penalty of £30 million in the UK and a $400m (£257m) criminal fine to US - does just this.

We have also written to Guardian News and Media, asking them to exclude BAE from the fair.

It is unacceptable for the careers service of an institution of learning and a newspaper which prides itself on its award-winning investigations into claims of BAE corruption to have any kind of dealings with BAE Systems and to lend legitimacy to its corrupt and damaging practices.

We call on both parties to publicly refuse to allow BAE to exhibit at future Graduate Fairs.

Signed (all in a personal capacity)

and Campaign Against Arms Trade (CAAT)