The Book Block did well during today's demo at Parliament and beyond (as did all the other brilliant fighters in the masses). Here Guy Debord's great text 'The Society of The Spectacle' resists police attacks. Caught up in between NUS, Education Activist Network, Green Party, SWP, NCFAC and all those others who really just seek to take power, those who just got on with resisting the police attacks gladden the heart. 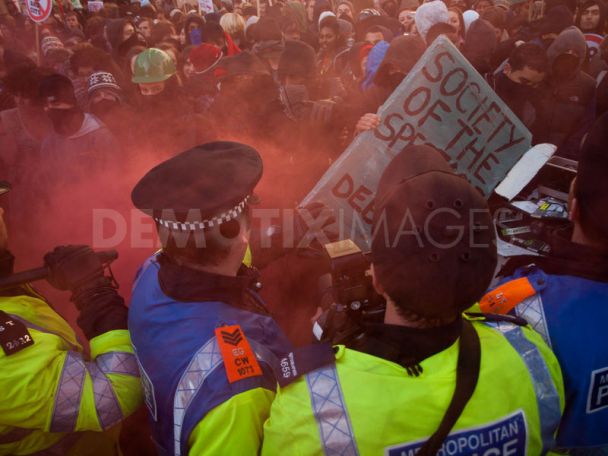 "The sham spectacular struggles between rival forms of separate power are at the same time real, in that they express the system’s uneven and conflictual development and the more or less contradictory interests of the classes or sections of classes that accept that system and strive to carve out a role for themselves within it. Just as the development of the most advanced economies involves clashes between different priorities, totalitarian state-bureaucratic forms of economic management and countries under colonialism or semi-colonialism also exhibit highly divergent types of production and power. By invoking any number of different criteria, the spectacle can present these oppositions as totally distinct social systems. But in reality they are nothing but particular sectors whose fundamental essence lies in the global system that contains them, the single movement that has turned the whole planet into its field of operation: capitalism."