I arrived in Parlaiment Square at approximately 2:30pm, by which time there were already several thousand other people there. 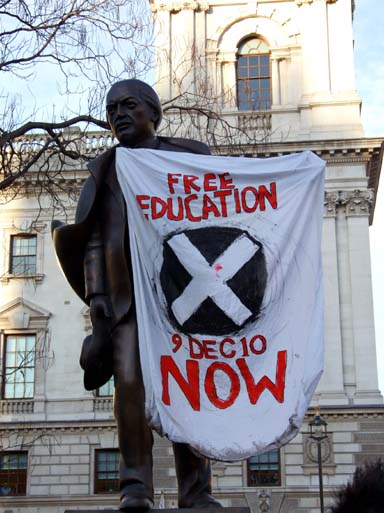 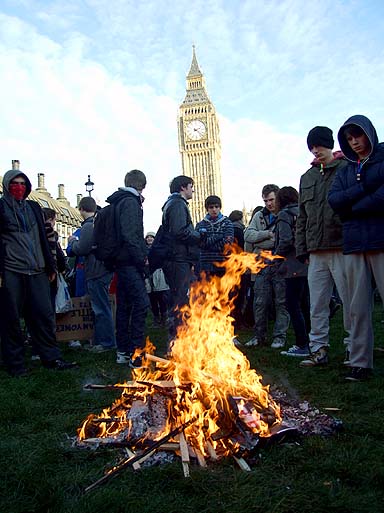 A bonfire, but no Tories on top! 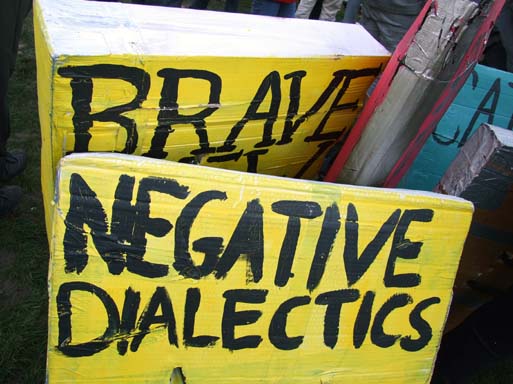 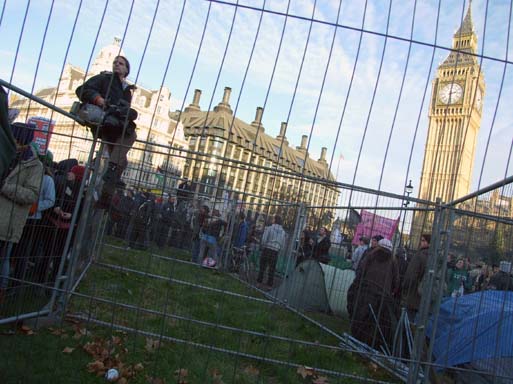 The open air prison camp that was Parlaiment Square. 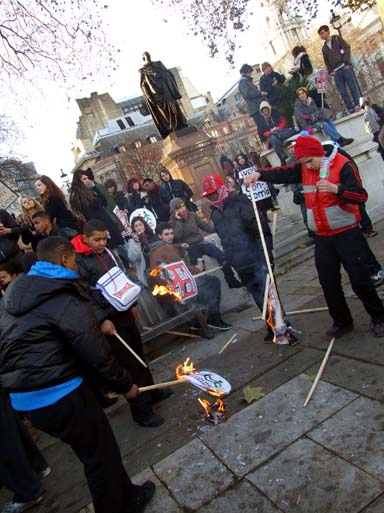 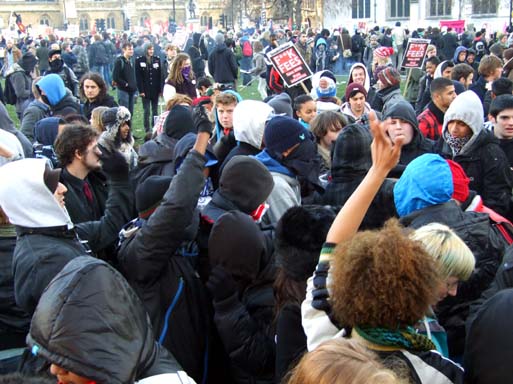 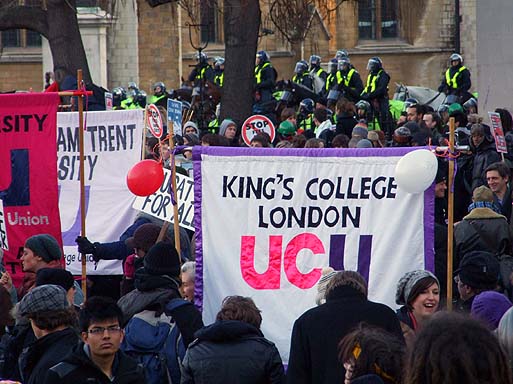 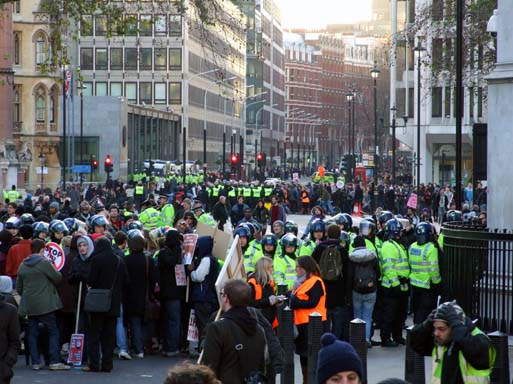 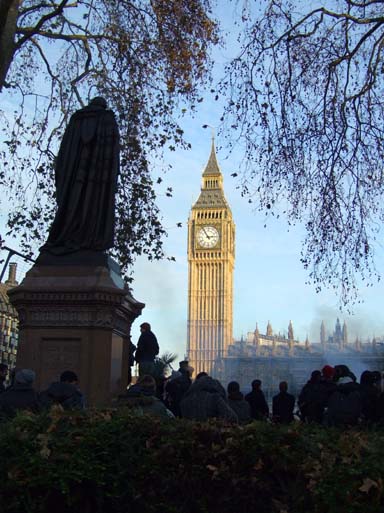 View from the back of Parlaiment Square. 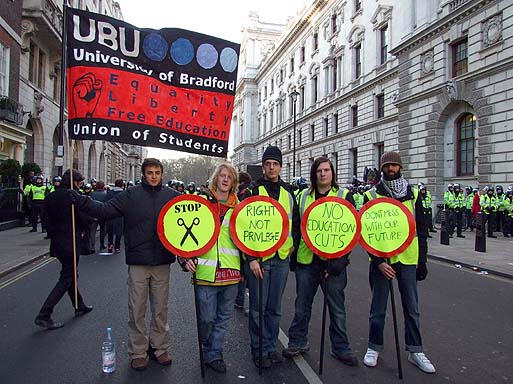 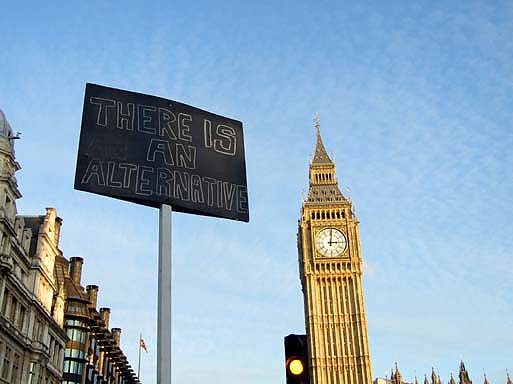 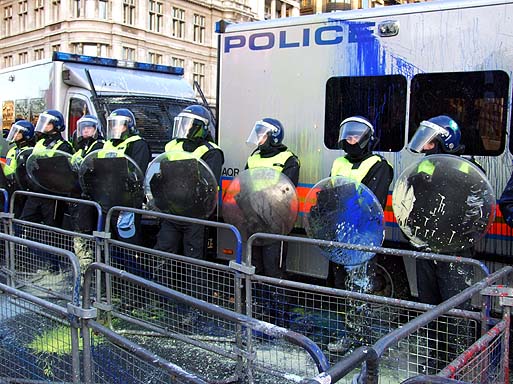 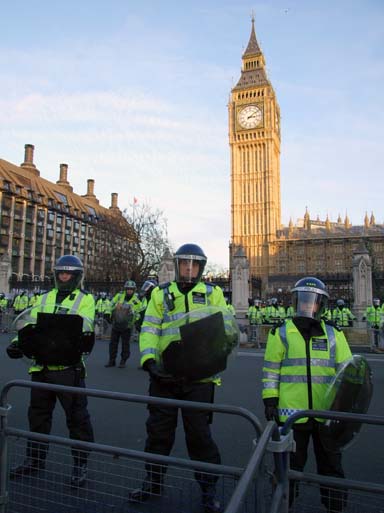 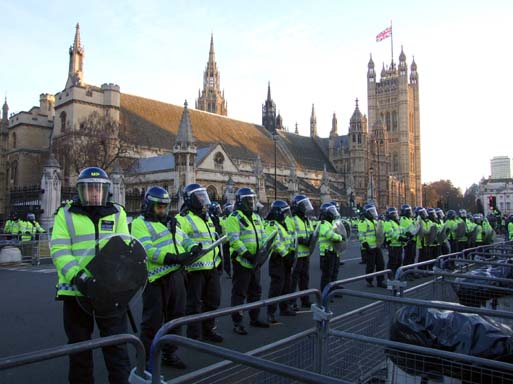 Defensive line of police, deployed in front of Westminster Hall. 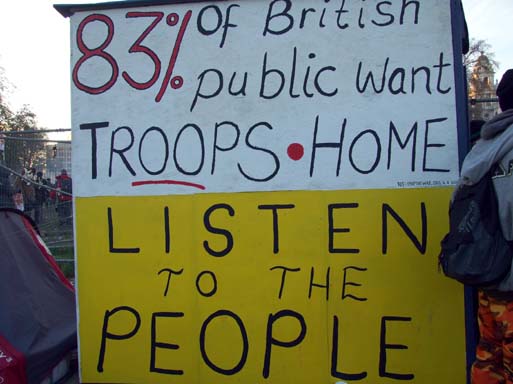 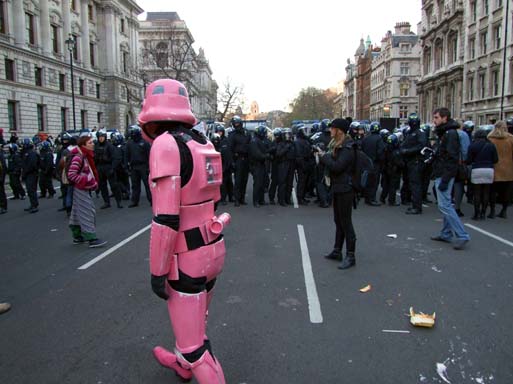 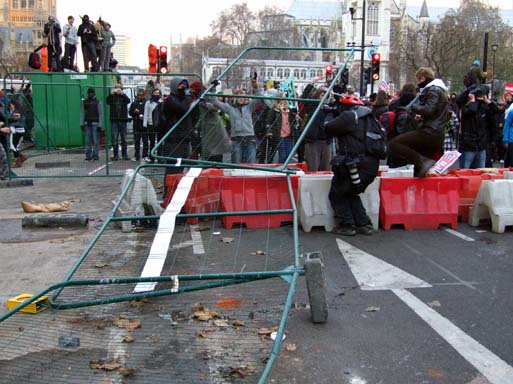 Protestors attempting to defend themselves, shortly before police line closes. 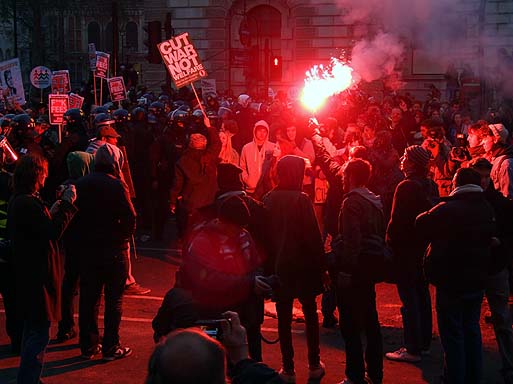 Burning a flare behind the police line. 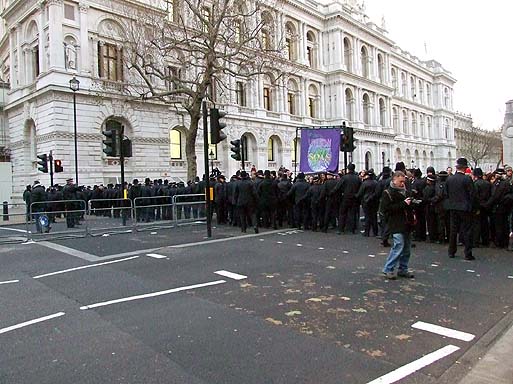 The last police line, near Whitehall/Cenotaph. 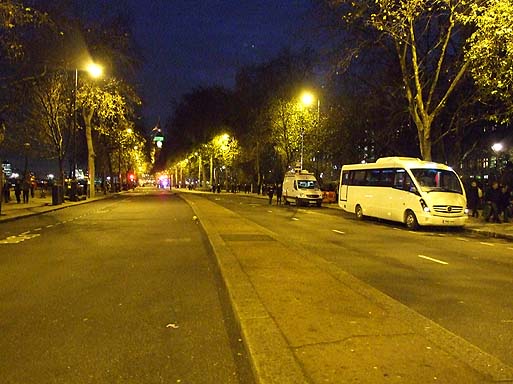 A deserted Embankment. Not often you can walk down the middle of this road!

It was already clear to me that within a few minutes of being here, the mood was palpably different, although still not an overtly aggressive one, with many people just standing around, as if waiting for something to happen.

I decided to wander around and keep taking pictures, but at the same time pay very close attention to the police's movements, because I knew that from the shape of the space, it could be a potential Kettling zone, and I really didn't want to get stuck outside in the freezing weather if possible.

As I circulated, I became more aware of a 'hardcore' element of people in the middle of the square, some of them the Black Block, who it was clear had taken a leaf out of the Italians' book by constructing Kettle busting barriers disguised as oversized placards.

I have no problem at all with this tactic and see it as a legitimate way of breaking police lines, especially when the police insist on falsely imprisoning people for hours on end in all weathers by surrounding them.

I also became aware of a significant number of mostly young males in the middle of the square, who were moshing in front of a sound system playing loud Grime.
They were all masked up and wearing hoodies, and looked like they were psyching themselves up for something. A handfull of them had started burning placards, but at this stage hadn't managed to build a fire with them. I understand this happened later.

Elsewhere in the square, another small group had managed to build a small bonfire out of placards, mostly to keep warm (see picture), as by mid afternoon, the temperature was already beginning to drop.

The mood in this area was a peaceful one.

I also saw another small group of people attempting to break off the door of what appeared to be a plastic Portaloo structure, which was laying on its side. This just seemed to be wanton, pointless destruction, so I stayed away from them.

This may have been the box that was set alight and burned later, although I cannot confirm or deny this, as it happened after I'd left.

What also struck me was the sheer number of police I saw being deployed in front of Westminster Palace, and in some places it was at least four rows deep, with a first line of defence constructed out of huge ballast bags and boxes constructed out of steel fencing (see photos). The ballast bags were placed inside these steel cubes. This structure extended for the full width of Parlaiment Square facing Westminster Palace.

This seemed to be a completely disproportionate police response to me, and definitely the biggest deployment of police manpower I've ever seen in Parlaiment Square.

It had clearly inflamed a few people already, as some of the police had been paintbombed, making a very surreal sight of multi coloured, splattered police holding their lines (see pictures).

I stayed in the sqaure for about an hour or so, in which time it became clear to me that the police were gradually starting to block off all the exits to the area, with more and more police being deployed, including some on Horseback, along with riot vans, which were gradually filling up all the side streets.

Abbey, and almost as soon as it formed, some protestors were walking towards them, clearly riled by what they were seeing.

Despite police chief's assurances in the press, it was clear to me that we were being Kettled.

It was time to go.

I did one more circuit of the square and shot a few more pictures, making my way towards the Westminster/Cenotaph exit of the square, as I had to catch a bus at the Embankment.

Within a few minutes of starting my exit from the square, it was became very clear that there was a huge build up of police manpower at the Westminster Station/Cenotaph exit, including a line of police in full riot gear, and behind them about ten riot vans in formation.

Time to get off the road.

Within a couple of minutes of doing this, the line of riot police had quickly moved towards the protestors at a brisk walking pace (the Samba Band was somewhere in the middle of the crowd and still playing), then literally seconds after this the riot vans also tightened up the line behind the police, coming a to a halt a few metres behind them.

During this police action, I saw a few masked up people trying to slow the progress of the police by picking up some of the steel fence panels and pushing them into the path of the advancing riot police.

It was clear to me this was intended as a defensive tactic.

I stood to one side of the street on a low wall, along with a few other people with cameras, and saw a small group of mostly males letting off a very bright red flare right behind the police line (see picture), although they held onto it until it burned out, and made no attempt to throw it.

Another few minutes of stalemate ensued, with neither police or protestors moving much (people in the front of the crush in front of the police line were becoming agitated at being penned in like Cattle), then I became aware that the line of police nearest to where I was standing was starting to move backwards up the pavement, so it was time to move on again, and I gave up the vantage point of the wall I was standing on.

I noticed by now that another line of police was forming at the far end of the metal corridor formed by the crash barriers beside the pavement, so thought it prudent to move away from Parlaiment Square entirely before this line was closed too and I became trapped.

I walked past the second police line (still permeable by then), and kept walking a few hundred metres up towards The Cenotaph, only to discover another police line, with a large unoccupied void of road between them and the backs of the riot vans near Parlaiment Square.

I could see I was in no immediate danger (being in the empty space behind the police line, so decided to stop for a couple of minutes to document what I was seeing before attempting to pass this next police line.

As I was walking around and taking pictures, a rather largely built constable approached me hastily, and proceeded to frog march me towards the line of black outfitted police.

He muttered many things to me (most of which I didn't catch), as he pushed me along in front of him, but one of them was "Fuck off" at the end, as he pushed me right into a another WPC in the line.

I was lucky not to be arrested for 'assualting a police officer' at this point and managed to get past them without further incident.

No people skills there then!

It was made patently clear to me by this action that the police were up for a fight, regardless of the mood the protestors.

This was the last unbroken line of police I saw as I walked back towards Trafalgar Square, although I did see a couple more waves of high vis police marching in formation towards Parlaiment Square.

When I got to Trafalgar Square, there were a few straggling protestors sitting on the base of Nelson's Column, and a very distressed mother, whose two fifteen year old sons had been separated from her back at Parlaiment Square. Fortunately she'd managed to contact them via her mobile phone, so I advised her to stay put and let them find her, London being the big place it is.

As I made my way back to Victoria Embankment to try and catch the bus home (it was about 5:00pm by the time I got there - the bus was supposed to leave at 5:30pm), it became clear that the Embankment was completely closed to traffic and the bus wouldn't get through. I met a few of the students from Cambridge waiting at the stop the bus was supposed to pick us up from, but we decided to get a train back to Cambridge.

It's clear to me that the police were up for a fight on Thursday, and there's nothing that anyone else could do that would have stopped this from happening, so to the organisers of the march of the march I say this:

There's nothing you could have done to change things.


As for what happened later, I have the following comment.

Whether we like it or not, also present on Thursday at the demo was a whole other section of society.

There are at least two generations of kids who have grown up on the vast high rise Council 'sink' estates in the suburbs of London, kids who (from their point of view) have little in the way of career prospects, whose parents were most likely also unemployed or in poorly paid jobs, kids who can't afford to go to sixth form college, let alone University.

What we saw on Thursday night was a tiny percentage of them turning up to vent their anger and frustration in front of the world's media.

They have been left out in the cold for at least the last three decades - their voices have been ignored, even by the campaigning, progressive left.

You'd be angry too if you thought no one was listening to you.

Don't they deserve a break too?

I relate to this generation because I too grew up on a Council estate, so I've got a pretty good idea what makes these guys tick. I was lucky though, as education gave me a leg up out of this situation.


I tell you this.

If they're ignored for much longer, what we saw on Thursday night will seem like a minor skirmish in comparison to the social demographic time bomb that will blow up in our faces.


You have been warned.