Capitalism is dying, let it burn – Report From the Front Line of the London Mob

Having successfully escaped my college before they attempted to imprison us again, following the events of the 24th, when our tyrant deputy head locked the gates, resulting in many of us just climbing over them anyway, I began my journey to Malet Street. 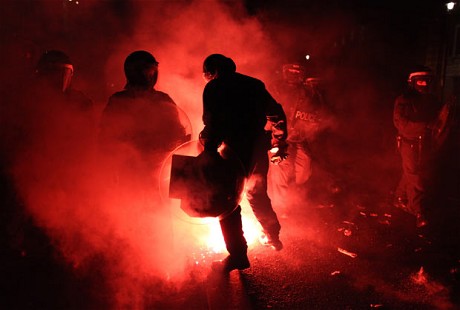 I got on a bus and sat there for about an hour or two. Drove past Russell Square and saw the sister protest forming at around 12ish. By the time I reached oxford circus, I could already hear the drone of the media helicopters circling in the air, for something new to twist and serve up as propaganda.

By the time I reached Piccadilly Circus, numerous riot vans were making their way to Malet Street. Joining up with a group of boys who had made their way down from Golders Green, I proceeded with the rest of the students who had come down to demonstrate on that day. Rolling up fags, waving black flags and chanting ‘Tory Scum!’ we trooped along quite happily and peacefully down to Malet street. It was only as we came to a standstill that the trouble began.

I personally did not come down and walk from Oxford circus to Malet street to be told by organizers who had struck deals with police, that we could demonstrate and exercise our human right of free movement as long as we stuck to a planned route, and neither had the majority of people who had turned up on that day as well. If I wanted to waste my time, I would have held candles with NUS representatives.

No. We turned the back around and brought down the barricades. So down came the obstructions and out came the beginning of freedom.

After successfully bringing down the ‘safety precautions’, we were able to join up with the protesters on the other side. And together we all marched down to Parliament Square. But of course the officers were not having that. How dare we attempt to reach the dwelling of the precious politicians who are selling us all out? So like good dogs they began to charge back at us with batons and shields. We then in turn, ran back at them with fencing. I have never before seen people so willing to sacrifice their own safety in the hope of freeing others. Anarchists, who the media have portrayed as spawn of the devil, were those who pushed to the front of the crowd, to take the beatings from the police in order to allow the rest of us to push onwards and escape.

We almost broke the line of police at that point, but then the lovely police officers decided to reinforce themselves with horses and charge us. To my delight, I watched later as one of them, fell off his horse and was trampled by it. Is it just me or is it animal cruelty to actually use a horse and bring it to a protest in the first place?

Seeing as we did not fancy on getting stampeded to our deaths that day, we turned around and made our way backwards. We were then faced with even more police, their horses and riot vans. Today was obviously not going to be simple. More charging, more beating. More student resistance, more charging. Stalemate.

At this point I left the front of the kettle to eat my sandwich on a wall.

In a last ditch attempt to actually try and negotiate with these animals, and be allowed to just go home now whilst it was fairly calm, myself and a group of boys who had travelled from outside London, went around the lines and tried to gain some information as to when they would let us out. But alas, I never learn, the police are liars and will always be liars. After getting sick of walking back and forth from pig bloc to pig bloc, we just went to sit back down again on the wall. I remember seeing a guy standing in front of the officers holding a sign reading ‘welcome to pig city’.

The police cannot even claim to receive any respect from the public anymore; they are a joke and quite a bad one at that as well. We are fighting for justice and instead of the officers- whose jobs will also be cut might I add, actually marching with us, they chose to wage war on us instead. So let them have it.

Contrary to reports that some people were allowed out, the only people who actually got ‘let out’ are those who escaped. One of the guys I was with received a phone call from 2 of his friends who had been let out of the kettle by police only to be forced back into it again as they tried to leave.

Pissed off and hungry we sat on the ground and waited for 6 o’clock to just hurry up. Those minutes are what I would describe as the countdown to apocalypse. We knew the vote would be yes, as the government – do not have any care for the average person and we knew that all hell would let loose as soon as it was announced.

And then it began. Back down towards the back of parliament square, it was all kicking off. From where I was sitting I couldn’t really see clearly, but we could hear chants of ‘Who’s kettling who? We’re kettling you!’.

Aww, the poor police were hiding being their shields and shaking as they experienced the ‘safety measures’ that they dished out on us being used on them. As we watched students break into the Treasury, I can say proudly that I have never witnessed anything so beautiful. As they broke in and blacked out the windows, it was pure symbolism that we the oppressed, would not tolerate being robbed of our rights in order to fund these buildings that represent the beliefs of the minority elitists who scrounge off us. In a nation where the state values money over the welfare of its people, may the black flag be hung everywhere. May the brick walls be smashed.

After receiving news that some people were being let out of the kettle, stupidly again we chose to believe that the police have souls, and attempted to find an exit. Once again we did a tour of the police blocks, and after being ignored every time we tried to gain information we settled for standing with the rest of the crowd. After waiting for about an hour, we returned to our beloved wall. At about quarter to 9, I made my way back to the bottom of parliament square and waited to be let out at 9.

Foolishly, we smiled as the police bunched us up together and marched us as if we were goats down to Westminster Bridge. As I witnessed on officer confiscate a boys Oyster card and remove someone’s hat, it was pretty clear that as we were being marched down, we probably were not going to go home at 9. The law had pretty much gone out of the window.

I am still waiting for an explanation as to why at 10:30 I was still being held illegally on Westminster Bridge.

On a fucking bridge above water. What would have happened if someone had fallen off?

Between 9 o’clock and the time I was actually released, I can honestly say this was the only time I began to panic. On top of Westminster bridge, another riot was beginning. As the police beat us whilst detaining us illegally, without any explanation we had no choice but to push back. After repeatedly asking officers why we were actually being kept here, the only answer we received was ‘You were told before’ – I guess legally this qualifies as an announcement? A woman next to me came to the front and literally began to beg the officer to let her go as her son, who was about 7 or 8, was about to faint due to the fact he needed an injection. Even with all of us shouting ‘let him go’ and the boy standing in the clear view of the officers, she was ignored and pushed back into the crowd. Another lady attempted to appeal to the better side of the officers (ha!) and explained to one of the more ‘humane’ looking ones that she was about to faint and could she please be allowed to go home, the officer promptly boxed her in the face with a shield. At this point I decided to phone home as I knew I was not going anywhere anytime soon.

Having being patient enough and whilst having our democratic rights being shat on, we then began to retaliate. The only way we were getting off this bridge was to fight our way off it. As we pushed forward the police responding by whacking us. As people began to lean over the side of the bridge, the police responded by attempting to squeeze us even tighter together. A boy in front of me attempted to explain to the officer at the front, that by them keeping us here they are only worsening the situation, if they had let us go home when we were calm this would not be occurring, besides the officers weren’t receiving overtime for this anyway, were they?

At about 1030–ish, we began to move forward off Westminster bridge, only to be stopped again. As we waited for the officer to allow us one by one out of the kettle and into the ‘walk of shame’. As we walked out individually we were faced with two blocks of officers on either side. The joy on their faces as they watched citizens limp home. Some even insulting us as we walked past. Maybe this is part of their job description as well, I don’t know.

All I can say is that, seeing as the government and the fools that “uphold” the law for their benefit, have introduced this modern day style of warfare against UNARMED protesters, we will uphold our dignity and strike right back. We do not care if they charge us, beat us, kettle us, deprive us of toilets, food and medication, we will not give in and we will not beg. We will fight.

It doesn’t matter that the Con-dems won by about 21 votes, we were not defeated. It doesn’t matter that I walked home barefoot and injured. It doesn’t matter that officers followed us onto the trains on the way home. The 9th December 2010 will be remembered as a victory in my eyes. When you have watched those who have been repeatedly beaten, go back to try and ensure our escape, sacrificing their safety and you watch thousands of ordinary people around you linking arms and pushing together, you begin to appreciate the meaning of solidarity. We are no longer afraid to stand up to these criminals.

As long as police and the government have the right to legally kill and maim, we will never have any rights. We will live in fear. I do not intend to roll over and give in. I will fight for my rights and the rights of the future generation.

We will be back.