On Tuesday 11 January 2011, the illegal detention and torture camp at Guantánamo Bay will have been open for NINE years. Barack Obama has broken his promise to close it by January this year and the situation for prisoners has recently worsened with Congress voting to prevent any more civilian trials for prisoners facing charges and attempting to block the release of any more prisoners. Join us to protest this unfortunate anniversary... 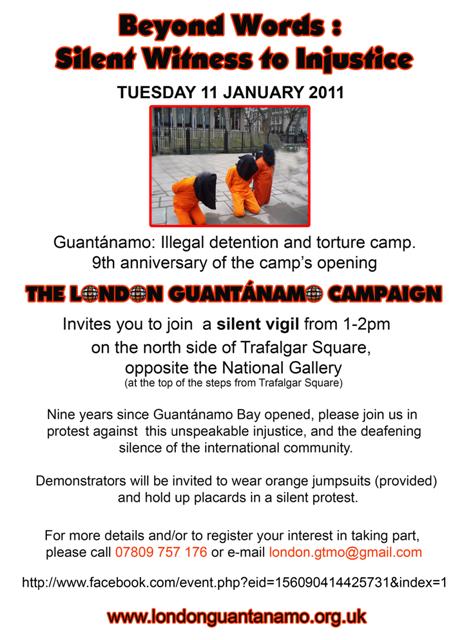 The London Guantánamo Campaign invites you to join us on Tuesday 11 January 2011 at 1-2pm for a silent anniversary vigil in Trafalgar Square, London (nearest tube: Charing Cross/ Leicester Square) to mark the ninth anniversary of the opening of the illegal detention and torture camp at Guantánamo Bay. We invite you to join us during your lunch break to protest this unspeakable injustice in silence. Nine years later, now is the time for action by world governments and not mere words.

The London Guantánamo Campaign is looking for volunteers on the day to hold up letters of the alphabet to spell: S-H-U-T G-U-AN-T-A-N-A-M-O. If you are attending and would like to pick one of the above letters to hold up, please let us know. Volunteers are also needed on the day. Please join us and bring your own placards and banners.

The situation for Guantánamo prisoners has recently worsened with the largely Republican US Congress voting to prevent more civilian trials for prisoners facing charges and attempting to block the release of any more prisoners.