On violence against the police

A participant in the 9 December demonstrations against education cuts and fees in Parliament Square writes on the use of political violence, and condemnation of it in the media.

The condemnations are as predictable as they are boring. The public-school educated Sun hacks, who write like some coked up parodies of proletarian semi-literacy, refer to “louts” and “hooligans”. The Daily Mail complains about someone urinating against Churchill’s statue, and the Telegraph is dismayed that Prince Charles and the Duchess of Cornwall were “attacked”. Probably by a “baying mob”. Meanwhile, someone in a moustache on The Guardian talks about how, no doubt, this will provide a “distraction” from the “real issues”, whose repetition ad nauseam presumably has some intrinsic value for the solemn liberal contingent. 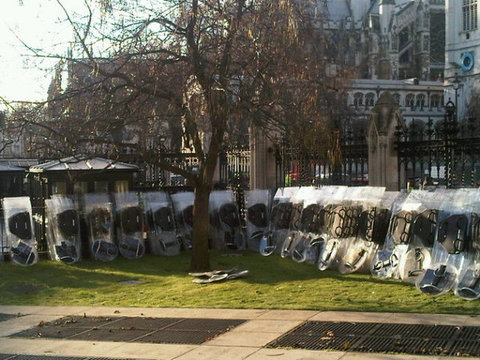 I can’t even be bothered to look up the precise terms of the condemnation this time. It’s always the same. A dash of the royal family, veneration for some long dead racist, shakes of the head from the banal but well intentioned. Is anyone still listening? Haven’t we read all this before?

The NUS and UCU are of course, for “peaceful protest”. What is the effective record of “peaceful protest”? How does social change happen? Is it always peaceful? Are kettles acceptable, and is it reasonable to try and break them? Such questions are politely neither asked nor answered: that would be politics – we’re just about protecting our reputations. Thanks.

One of the oddest, least remarked upon, features of contemporary capitalism is the way it systematically enlists all its main functionaries in talking nonsense on a day to day basis. The police don’t really believe that the “kettle” is a necessary response to violence.

It seemed more to be motivated by traditional aims of kettling that are rarely stated: to demoralise protesters so much that they are dissuaded from taking part again, and to exhaust them physically so that they go home quietly (not that there was any need for the latter by this stage of the night). While queueing to leave Parliament Square, a woman next to me jokingly told a police officer that if they let us go, she would promise that this would be her last demonstration. The officer replied, “That’s the point.” [Guardian]

OK. Now we know that. They know that. We know they know we know that. But, of course, they can’t say it, officially, in public. That’s against the rules. It’s like the “have you ever taken any illegal drugs” question on a job application form. No one expects you to answer truthfully: it’s a test, the real content of which is: “are you a fucking idiot?” No? Well go right ahead them. As long as you can play the game, it’s all ok.

Another recent example: Wikileaks cables shows that the US finds the obsequious grovelling of Conservative politicians “humorous”. But of course, Atlanticist politicians on both sides leap to say how important “the special relationship” really is to America. Of course they do. It’s the same rules we learned at school: deny everything, keep looking straight ahead and there’s nothing anyone can do.

We all have our own stories from last night, no doubt. A girl had a clump of her hair pulled out. A 20 year old is in hospital, having had to have life-saving brain surgery, amongst 43 hospitalised protestors. I’m sure it says somewhere that “there will be an investigation”. (Tomlinson, cough, Menezes, cough, etc. cough.) “My 19-year-old sister was forced to the floor by police when caught in a crowd and when attempting to get up was punched in the face by a male officer. She is sporting a black eye this morning” says one. Another: “a guy running away from police along Whitehall getting being unable to run further because of a stray barrier. Before he could jump over, two police charged into him with their shields and repeatedly hit him with their shields, against the barrier.”

Fair-minded people are against “disproportionate”, “provocative”, or “brutal” policing; and presumably in favour of a polite push and shove. This is an appealing message (and it may make sense to accentuate it to the cameras), but is more or less a fiction. Of course, there are incidents here and there where we can say that particular police could have been less brutal. But if the direct action we defend has any content at all, it must mean we supported, and support, concrete attempts to stop the law being passed, up to, including, and beyond the invasion of parliament – and we are in support of people trying as hard as possible to do that. And it is a fiction that the police could have tolerated that, or that preventing it could ever have been done gently. If it could have been, we wouldn’t have really been trying. If the police hadn’t been at parliament square last night, and if they hadn’t been prepared to act brutally, parliament would have been stormed, and legislation to triple top-up fees and abolish EMA would not have been passed. The brutality of the police is not incidental to the nature of the state, it is essential to it.

So you have to pick: the state, and horse charges against children who object to having their pockets robbed; or against the state (which means: against capitalism, for social revolution); and against the police too; brutal or otherwise. Polite fudges are polite – but more or less part of the continuous stream of liquid nonsense which constitutes the news media.

Next time, we should bring masks to give out. Just like on the Gaza demos in 2009, too many young people are going to get arrested because their faces appear on police footage – and in the photographs of the numerous “independent” photojournalists who sell images to the right-wing press, many of whom should arguably be looked on as police evidence gatherers.

Someone has to say it: mass violence against the police is necessary as part of any social struggle. We wish it wasn’t but it is. The reason is simple: the police defend the state unconditionally, the state defends capital unconditionally, and capital attacks us without remorse – or even a second thought. Reasonable liberals yearn for a compromise: but the state isn’t listening. Neither should protestors.

When Charles and Camilla were ambushed, or a fence was thrown at police, or a crowd broke the thin blue line: those were good things, and we support the people doing it. They are by no means sufficient, nor are they particularly helpful as isolated acts. What is important is that they establish the movement on new terrain. They represent the conscious willingness to defy and confront state authority, and state power. And that is the beginning of everything hopeful.