The Inevitability Of Brutality

The police brutally repressed demonstrators on the 'Day X 3' student protests in London last week, continuing the pattern of escalation seen since the 'Battle of Millbank Tower' on 10th November. Quite apart from the cavalry charges and the kettling - which as Laurie Penny has noted are intended to discourage young people from making more stands - some mainstream media attention has gone to the cases of Alfie Meadows and Jody McIntyre. 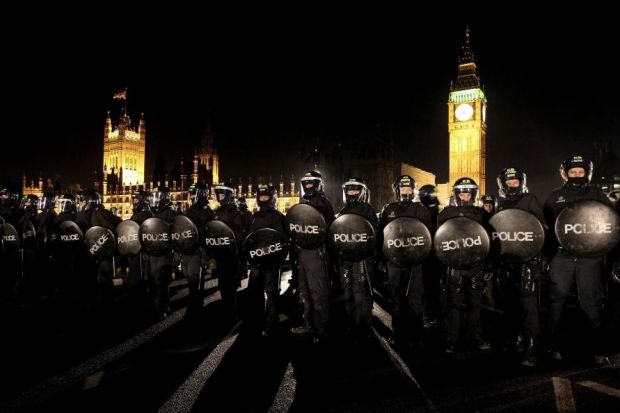 Now we see the violence inherent in the system!

Alfie Meadows is a twenty-year-old Middlesex University student and a dedicated activist. In May, he occupied the university's Trent Park management building, in defence of the Philosophy department, which had been earmarked for cuts. On the evening of 9th December, he was batoned on the head by police when he tried to leave the kettle. He then fell unconscious, and suffered a stroke. He received hours of emergency brain surgery at Chelsea and Westminster Hospital.

Jody McIntyre is an activist blogger with cerebral palsy. On 9th December, police attacked him in his wheelchair on two separate occasions (one of which is shown here). As Phil Dickens observed, McIntyre's subsequent BBC News interview with Ben Brown was "a transparent display of the propaganda model in action." Furthermore, "The BBC is also at pains to stress that they "cannot verify the authenticity of this footage." But a counter statement by the police is printed entirely without comment."

Yet again, the mainstream media begins their coverage from of cops from an incorrect premise - that they are neutral upholders of democratically decided laws - and therefore subject anyone with a complaint against them to enormous suspicion. For those with the stomach for it, Richard Littlejohn sunk further into the bog of bigotry in the Daily Mail.

Disgusting though the police's behaviour was, we should not be in the least surprised. Capitalism is economic brutality, and is in direct contradiction to the interests of the overwhelming majority. As a last resort - once the usual safety valves have failed - it can only be imposed by physical brutality. This is a task which normally falls to the police, though the army are kept in reserve behind them. As a participant in the Parliament Square demonstration wrote on The Commune's website:

"If the police hadn’t been at parliament square last night, and if they hadn’t been prepared to act brutally, parliament would have been stormed, and legislation to triple top-up fees and abolish EMA would not have been passed. The brutality of the police is not incidental to the nature of the state, it is essential to it."

Demonstrators should expect repression from the police, because repression is the whole point of police. The state claims for the itself a monopoly on the legitimate use of force. In turn, the mainstream media acts as cheerleader for state power. Those who would go against the system need to be aware of this, and take it into account when drawing-up their strategies.