The day after…update on student protests

The Senate has confirmed today – The Gelmini reform will be discussed next Monday 20th December, the final vote will be on the Wednesday. Today there have been more protests. In Naples a spontaneous demo erupted this morning, blocking the city centre. Students occupied the Anfiteatro Campano and other monuments, where they hung a banner saying “Future Thieves” (playing on the title of the famous 1948 neorealist film “Bycicle Thieves”). A public assembly has been set for this Saturday to discuss what to do in view of the Senate’s vote. 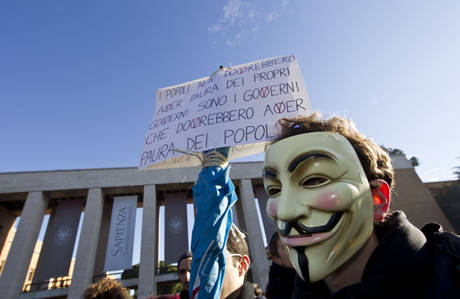 Bad news from Pisa: so far at least 33 people have been charged for various offences, ranging from criminal damage to assault. 6 of these people are believed to have taken part in the riots of 17th November. The remaining 27 people all took part to the big protests of 27th November, when students blocked the traffic and occupied the main railway station and the airport.

From Rome, the updates aren’t good either. Of the arrests made yesterday, at least 23 have been confirmed. All minors were released between last night and this morning. The remaining 23 are all between 19 and 38 years, but their identity is still not certain – up to this afternoon, their lawyers still hadn’t been allowed to contact them. A speedy trial that had been set for tomorrow 16th December has been cancelled this afternoon after the magistrate decided he wanted to “carefully examine each single case”. The possible charges are: criminal damage, assault and resisting arrest.