Who is in charge: the Foreign office, Defence ministry or the Oxford Union ?

With a fresh batch of 'secret' Wikileaks on Sri Lanka out yesterday, the 'private' visit of Dr. Liam Fox to Sri Lanka, as arranged for this weekend, is canceled.
Questions have been raised in UK parliament on the content of the 'private' meeting the Defence secretary had with Mahinda Rajapakse in the Oliver Messel Suite of the Dorchester Hotel in London, 1st December 2010. 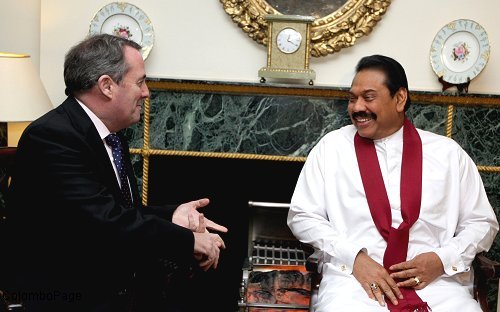 Guardian reports [1] Defence secretary Liam Fox postponed his trip to Sri Lanka to the new year, saying he had to extend a visit to the Gulf. While pointing to various recently released US embassy cables in Colombo the paper points to a conflict between the William Hague and Liam Fox.
With the Foreign and Commonwealth Office still firmly in charge (refer to earlier WikiLeak on David Milliband),the pre-election manifesto of the Tories is now exposed [2] . The manifesto committed to increasing defence exports, saying it was the only way profitably to maintain the domestic industry needed to supply Britain's armed forces.

It is clear that giving protection to a despot such as Mahinda Rajapakse, though a small one within the grander scale of international arms trade, is a matter of prestige, that itself is marketed worldwide, mostly to repressive regimes.

The Oxford Union, infested with selfish and dangerously ambitious people, remains a vital tool in such marketing tactics by the arms trade. It has been commented in the Private Eye that Bell Pottinger arranged the failed PR trip and the Sri Lankan high commission has claimed to have organised the 'invitation' to the Oxford Union from early October 2010. The credibility, if any, the Oxford Union has as an independent body is exposed as lies.

Shocking (warning: could be highly distressing) new longer length video that seems to have been edited by Channel 4 to coincide with the Oxford Union event that never happened (click on the first video)


Some informative posts and comments in Oxford IMC are as follows

'President Rajapakse in the Hillary Term'

'Developments out of Oxford 'Tamil' Protest'