Earlier today, flashmobbers staged a sleep-in at HSBC Covent Garden, to highlight the homelessness that could be avoided if the bank hadn't evaded an estimated £2Bn in tax. The action was part of a nationwide series of 'PayDay' protests against tax evading businesses, orchestrated under the banner of UKuncut. many protestors reported a positive reaction to the actions from shoppers and passers by. 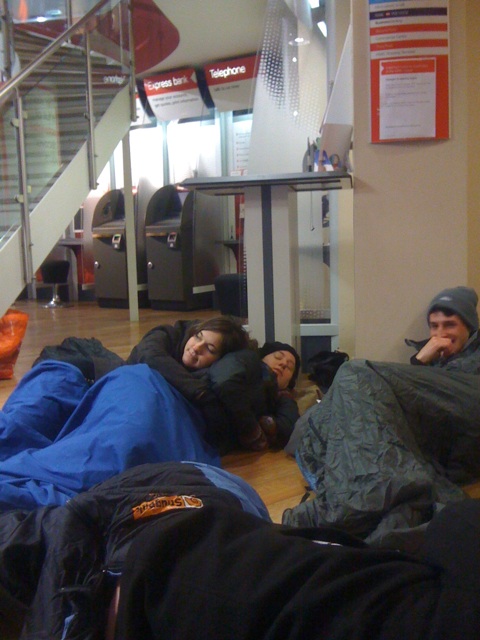 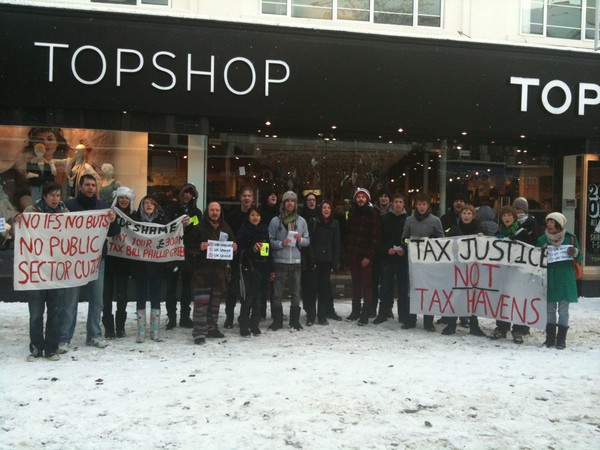 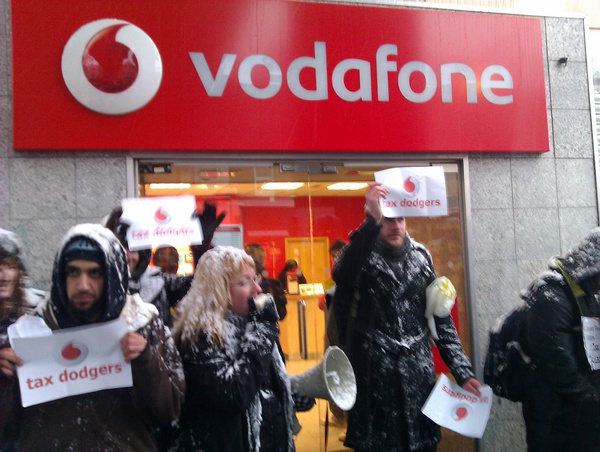 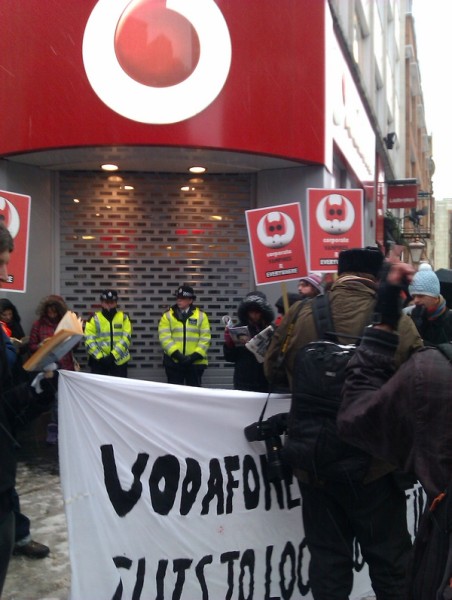 This Vodafone store is not available - Oxford Street 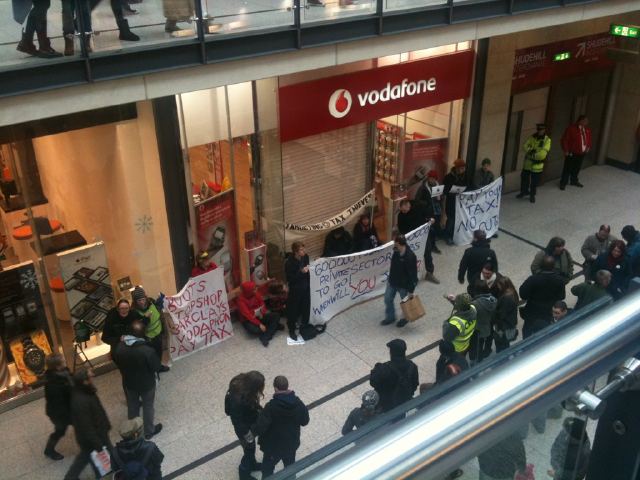 We apologise for the interrupted service - Manchester Arndale 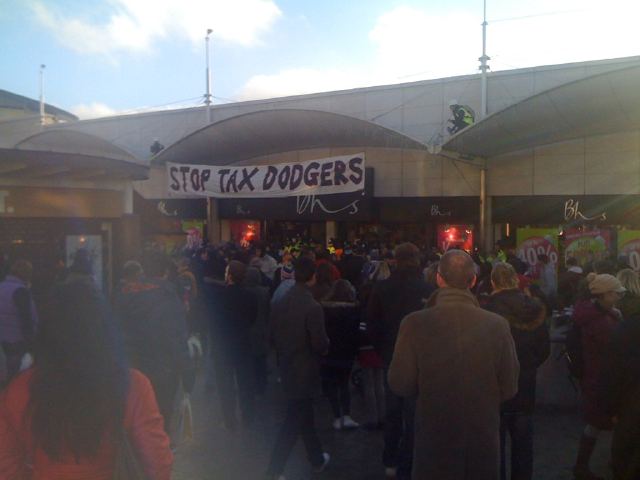 BHS in Brighton appears to have joined the campaign 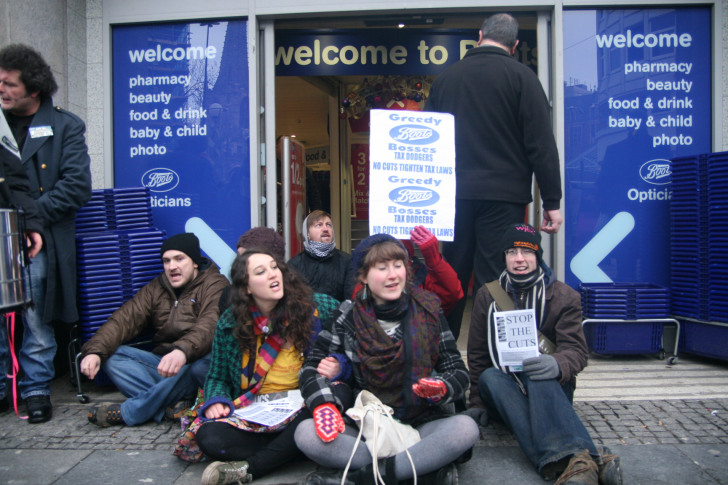 Outside Boots in Sheffield 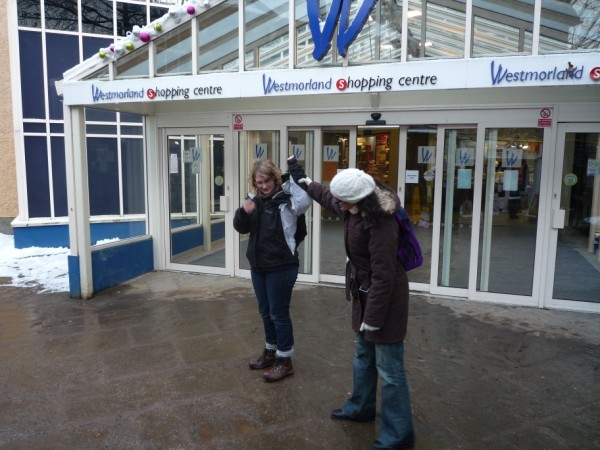 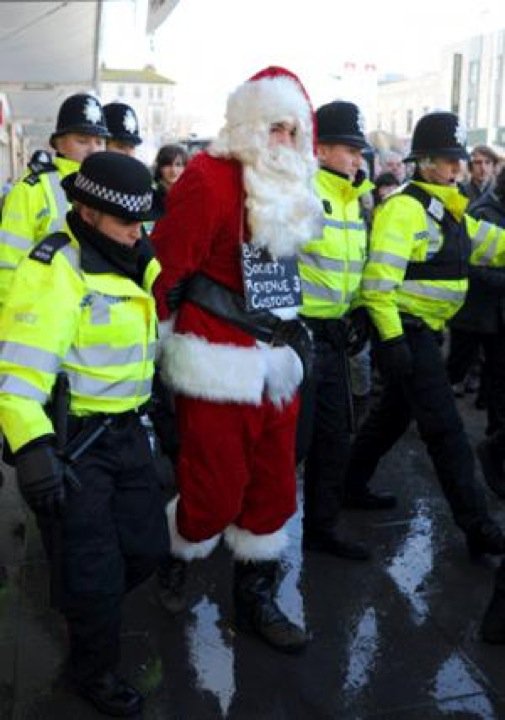 Arrest of superglue santa in Brighton 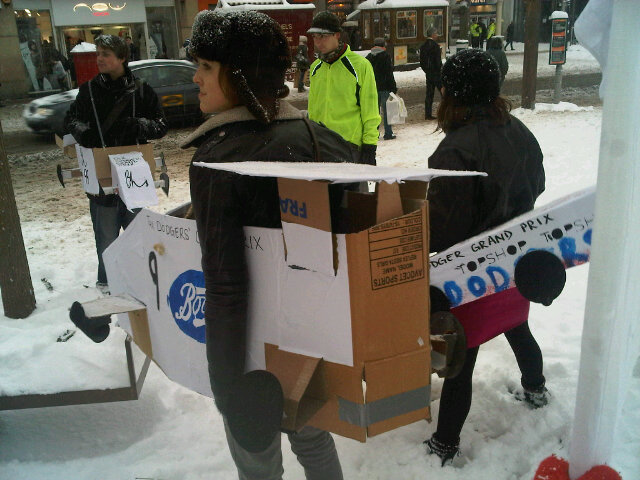 In Truro Cornwall, a group of over 20 moved around tax-dodging stores, effectively closing Burton's, TopShop and Vodaphone, BHS and Evans where staff advised customers to step on or kick protestors on the way out. Police tried convincing people they needed their details because they were comitting civil trespass!

Around 30 protestors shut down Dorothy Perkins and Burtons in Tunbridge Wells before moving on to occupy TopShop.[Photos]

There was chaos in the TopShop Oxford Street shop where the sports bloc descended, playing egg and spoon races and blowing whistles while police attempted to drag them out, and a book bloc which linked tax evasion with library cuts. [Protestor's account]. 100 protestors later linked arms in BHS to prevent security from evicting them. In the afternoon, HSBC Oxford Street was the setting for a sit-down protest, along with Marks and Spencer whose CEO is a vocal supporter of the ConDems cuts. By mid afternoon the demo had moved to Tottenham Court Road, where protestors reported finding shops shut pre-emptively by the time the demo reached them.

Vodafone has been visited in many places including Manchester [video], Wrexham, Birmingham, Brixton, Durham, Cambridge and Glasgow, and closed in Oxford Street. The Newcastle store was already closed when protestors arrived.

This morning, Bristolians set off towards the stores, with one of them identifying the targets as 'Vodafone, Topshop, The Tax Dodging Capitalist World'. They managed to close a number of stores and promise even bigger demos in the new year.

In Edinburgh, police blocked all the entrances to TopShop after a flashmob of 30 people appeared in the store.

Local groups in Sheffield staged a play written by a local playright outside Boots.

In Kendal, Cumbria, anticuts protestors were violently ejected from the Westmoreland Shopping Centre by brutish thugs with a dislike for leaflets

In Brighton protestors met up at the clock-tower before moving off to BHS where a banner was unfurled from a canopy above the doors. Later the protest moved on to Dorothy Perkins, where Santa faced arrest after supergluing himself to the store. Police were later struggling to get the banner droppers off the roof of Churchill Square.

Oxford uncutters staged a 'Monaco tax dodgers grand prix' which saw the closure of BHS, TopShop, Boots, Barclays, Vodafone and Lloyds as they raced around the town. 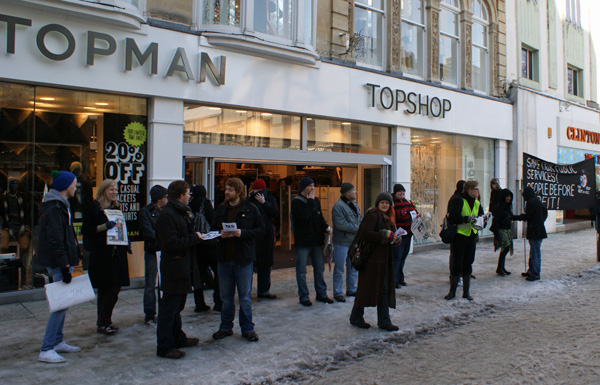