Student: Why I am protesting

David Cameron recently wrote in the Evening Standard, ‘Before protesting, students need to get the facts straight.’ There is an establishment theory that the student protests are a knee-jerk reaction to reform. They claim that the student actions are ‘hysterical’ and ‘ill-informed’: basically, we don’t know what we’re talking about. Students just want an excuse for a ruckus, the theory goes; we are bored of daytime TV and binge drinking, so we’ll try rioting for an adrenalin-filled change. 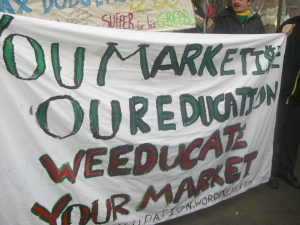 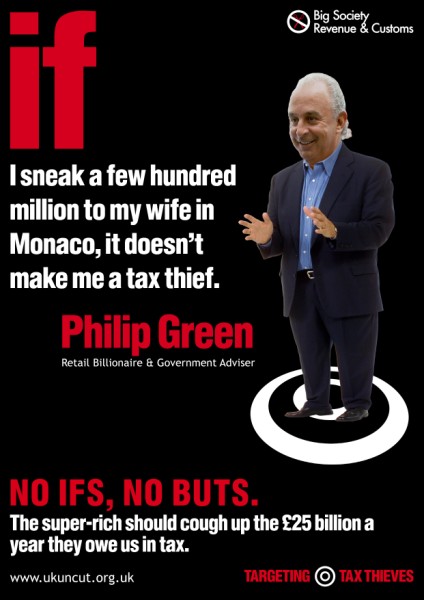 Another myth is that the students are entirely self-interested. They don’t want to pay more fees, the critics argue, but why should the taxpayer foot the bill for their superfluous education? However, I personally am a PhD student. I have guaranteed (well, so they say) government funding for the next three years. The rise in tuition fees will not affect me at all.

This dismissal of our concerns is hardly surprising, but it is time to reflect on what we are doing and make explicit our reasons for protesting. At the protests and occupations, I have encountered students from all walks of life, demonstrating a range of political views and identities. We all have our reasons for being there.

So what are my reasons for protesting? Why do I care?

1. The principle – Much of the public debate regarding The Browne Report has centred on tuition fees. Under the new government plans, students will pay up to £9,000 per year in fees for an undergraduate degree when they earn £21,000 per year; currently students pay £3,000 per year and start paying back when they earn £15,000. The government claims this is fairer than the current system, because students pay back when they earn more money. Critics claim it is unfair; firstly, as the fees will be so much higher they believe it will be off-putting to students from poor backgrounds, and secondly, while students start paying the fees back later they will be paying back three times more than they currently do.

This pragmatic debate about the consequences of the plans is obviously important. However, it masks a much deeper problem. The fees are going up because the government is almost completely removing the ‘block grant’ to universities, which underwrites their teaching. Its removal means that universities must find their funding elsewhere. This is why the rise in tuition fees is so steep; students are plugging the gap left by the cutting of government funding.

This is not just a problem of finances, however, it is a question of how this country views and values higher education; it is a question of principle. University education is a public good (it benefits the whole of society and is funded by public money). Removing state funding from universities and creating a market in higher education changes its status from public good to private commodity. It means universities are no longer considered as centres of education, learning, cultural and intellectual advancement, acting as a forum for public critique and exchange. They become supermarkets for school-leavers, where they acquire skills that will get them a job (preferably in science, medicine or engineering as these are the subjects that will ‘drive economic transformation.’) This logic is deeply flawed. The Browne Report constitutes a sea change in how we think of higher education – from public to private, state to market.

2. Police brutality -The police tactics at the student protests have been deplorable. I have experienced ‘kettling’ - the police block all the exits to a small area trapping protestors for as long as they want, without access to food, water or toilets. The aim of a ‘kettle’ is to increase the pressure among the protestors, to incite violence. Then the police can point the finger at us for our violent behaviour.

The police have also used horse charges, where they line up dozens of mounted police and charge into the crowd. This tactic is extremely dangerous, and it is only a matter of time before someone is badly hurt, if not killed. At the protest on 30 November, protesters retaliated by throwing sticks and stones at the mounted police: a desperate attempt at self-defence in the face of a disproportionate attack.

The police have also hit protesters with batons. One student, Alfie Meadows, is still in hospital suffering from life threatening brain injuries. A disabled protester, Jody McIntyre, was dragged from his wheelchair in what he believes to be a tactic to incite retaliation from protesters.

It would be wrong to claim that every student protester has behaved like a saint, but we have to ask where the violence is coming from. The real ‘violence’ is hemming people into an enclosed space for hours on end in the freezing cold, baiting them to retaliate, charging them with horses and beating them with batons. The state is using excessive and disproportionate violence on people who are protesting because the politicians won’t listen to our views any other way. The police are doing a wonderful job of radicalising a generation.

3. The bigger (feminist) picture – Students have striven to locate their concerns in the wider context of public sector cuts. I want to set aside the question of the pros and cons of the welfare state for another day, and instead I want to highlight an under-rated effect of the cuts – the disproportionate effects on women. As a woman and a feminist theorist, I am concerned for the future of gender equality in the UK.

In terms of higher education, the hike in fees could be off-putting to young women thinking about university. Women earn 16.5% less than men in the same jobs, so it will take women a lot longer to pay back £27,000 worth of tuition fees. The Women’s Budget Group is working to highlight the impact of the other cuts on women. They have found that cuts in benefits will disproportionately affect women because women claim almost 100% of child benefit, and 53% of housing benefit. Lone parents and pensioners, most of whom are women, will suffer the greatest loss in public services. 65% of public sector jobs are held by women.

Broadly speaking, when the state cuts back, women fill in the gap; be it in education, health, social services or care-giving. This has been demonstrated time and again in countries where Structural Adjustment Policies (SAPs) were implemented by the IMF. There is no reason to think the effects will be different in developed countries. Theorizing gender should be central to this movement’s aims.

4. The Alternatives – Finally, there are alternatives. The government claims that the cuts are essential in order to deal with the deficit and to get the UK economy fighting-fit. They have not aired or discussed that fact that there are other ways of doing this.

The UKuncut movement has highlighted that tax avoidance is a multi-billion pound enterprise. Philip Green (government advisor on the cuts) dodged £285million pounds of tax in 2005 alone, which could send 9000 students to university, or pay the salary of 20,000 NHS nurses. Vodafone owes the government £6billion in tax, which the courts were going to enforce until George Osbourne stepped in and allowed them to get away with £1.2bn.

False Economy has gathered evidence from Nobel prize winning economists as to why the cuts are actually detrimental to the economy, rather than to its benefit. They argue that the cuts will slow the economy down because there will be higher unemployment, less spending, and a lower tax intake, retarding economic growth.

I am not an economist, so cannot detail a concrete alternative budget proposal. What I object to, as a political theorist, is the lockdown on discussion of alternatives, the flagrant support of big business over the poor, and the lack of government discussion with the public. The government is dictating from above, they have shut us out. The government is acting in an elitist, dictatorial fashion, which is not acceptable in a liberal democracy where a plurality of ideas should be allowed to be expressed. The alternatives ought to be discussed.

What we can see from each of my motivations – protecting education as a public good, reacting to police brutality, fighting for gender equality and trying to highlight the alternatives – is that they all stem from a common cause. The real motivation for the government cuts in education and the public sector is ideological. The Conservatives (and lame-duck Lib Dems) are carrying-out a backlash against the sprawling state. Austerity has become a byword for neoliberalism. The restructuring of education as a market, the violent state reaction to dissent, the lack of concern for equality and the lack of public debate all represent the mantra of neoliberalism – maximising the market, minimising the state.

One could argue that now Browne’s proposals have passed in government that my main reason for protesting – protecting education – has gone. However, we must remember that the poll tax also passed in Parliament, and through public dissent and disorder it was never enforced. It is important for the student movement to learn the lessons of the past. It is also essential to think reflectively about why we are fighting. We mustn’t be scared of raising the issue of ideology. The Conservatives have an ideology and they are imposing it on us. It is up to us to critique it, deconstruct it, and provide the alternatives.