Bradley Manning is a 23 year old man being detained by the US government in regard to footage released by the WikiLeaks site showing the killing of 12 civilians by the US military. 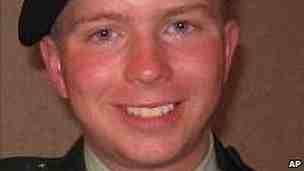 Private Bradley Manning, a US soldier, is being held in solitary confinement in a high security military prison at Quantico marine base, Virginia, USA.

23 year old Bradley was arrested earlier this year and charged with stealing secret information. One accusation concerns a video of an Apache helicopter killing 12 civilians in Baghdad in 2007. The video footage showing this was released on the WikiLeaks website.

Bradley is confined alone to a tiny space for 23 hours a day. He is 'checked on' every five minutes day and night, and is expected to sleep under these conditions.

Despite his punitive imprisonment and detention he has not been formally indicted with any crime, and no trial date has been set.

It's important that this is being picked up by the mainstream media.