On 31st December 2010, Jawaher Abu Rahma died after inhaling massive
amounts of CS gas being used against demonstrators at an anti apartheid
wall demonstration in Bil In. She is one of over 20 people in the West
Bank who have died as part of the popular struggle against the wal and
settlements since 2005, many at the hands of supposedly ‘non
lethal’ weapons. 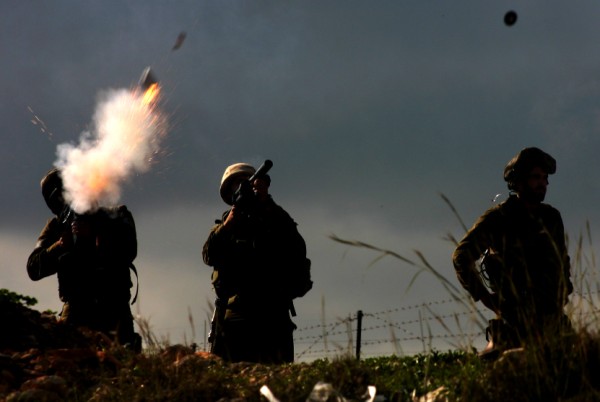 In April 2009, Jawaher's brother, Bassem, was killed by a tear gas
canister while attending an anti wall demonstration.

For the Israeli military, ‘non lethal’ weapons are a useful tool of
repression against the non violent popular movements of resistance in the
West Bank, allowing it to attack people on demonstrations, as well as
within their homes, without drawing the attention of the world. A death
caused by a ‘non lethal’ weapon is never called a deliberate killing,
allowing Israel to continue its mission of ethnic cleansing in the West
Bank with impunity, in the name of accidents and malfunctions.

For the rapidly evolving ‘non lethal’ weapons industry, Palestine is the
perfect testing ground for increasingly sophisticated, disturbing and
dehumanising technological means of repression. It’s not only Israeli
companies taking this opportunity to test the effectiveness of their
products. The companies complicit in the death of Jawaher and others are
international, and can be resisted in the UK.

They are weaponised pieces of military equipment, and are, variously,
intended to inflict pain, cause vomiting, interfere with breathing,
interfere with vision and hearing, physically prevent movement,
contaminate a person with a dye that allows them to be identified as
having been in the vicinity when a weapon was used, or cause massive
discomfort and humiliation. Above all, the active aim of ‘non lethal’
weapons’ use is to bend the will of their victims; to coerce, intimidate,
threaten and confuse. ‘Non lethal’ weapons are dangerous arms and chemical
agents, and a weapon is never designed with the safety of its target in
mind.

The deliberate inflicting of pain and psychological stress on any civilian
population is unacceptable.

"From the streets into the offices, factories and headquarters is where
we need to take this fight, to the heart of decision-makers that are
supposedly making decisions on our behalf and the companies making a
killing out of the occupation. The third intifada needs to be a global
intifada"
Ewa Jasiewicz, Free Gaza Movement 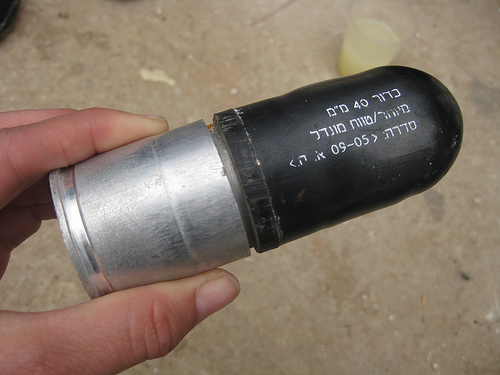 Anyone familiar with Palestinian anti-Wall demonstrations knows that Israel’s use of tear gas is a regular occurrence. The Israeli military uses both long and short range powder and gas tear gas canisters as a means of crowd dispersal.

On the morning of 1 January, Bil’in village resident Jawaher Abu Rahmah became the first victim in 2011 of Israel’s liberal tear gas usage, after she inhaled large amounts of the gas that was sprayed at Bil’in village demonstrators by the Israeli military on Friday, 31 December.

The 36 year old, whose brother Bassem Abu Rahmah was killed by a tear gas projectile fired at his chest by Israeli soldiers in April 2009, was taken to the hospital following the protest but did not respond to treatment.

Some of the tear gas canisters used by the Israeli military are manufactured by the American company Combined Systems Inc., which is based in Jamestown, Pennsylvania. The company manufactures a variety of grenades, aerosols, impact munitions, and arms launchers.

While Combined Systems Inc. and the Israeli military maintain that the canisters being used are non-lethal, on its product notes Combined Systems recommends the use of a full face respirator with organic filter cartridge, or self contained breathing apparatus (SCBA) for those deploying the canisters. A SCBA is a device worn by rescue workers, firefighters, and others to provide breathable air in an Immediate Danger to Life and Health Atmosphere. Combined Systems further recommends ventilation, local exhaust, protective gloves, eye protection, protective clothing to prevent skin contact, and washing thoroughly after handling.

The tear gas being used by the Israeli military is commonly known as CS gas. Following the 1993 American FBI raid on a compound in Waco, Texas, in which large amounts of CS gas was used and dozens died, an investigation was conducted into the possible lethal effects of CS tear gas.[1]

According to the report, “Based on the available data on toxic and lethal effects of the CS and considering the worst exposure scenario at Waco, there is a distinct possibility that this kind of CS exposure can significantly contribute to or even cause lethal effects.”

Because there are no scientific tests studying the effects of CS gas on humans, the report explores the toxicity of the gas on animals and then lends that information to an understanding of how CS might, and in past instances has, affected humans.

“In inhalation experiments, only delayed deaths were observed after exposure to high concentrations of CS. This response indicates a different mechanism of action of CS depending on the type of exposure. After inhalation exposure, the toxic response focuses primarily on the lung, with direct effects on the mucous membrane and the epithelial cells,” noted the report, following experiment with different animal groups.

“In addition to strong irritation at higher concentrations, inflammation and damage to the alveolar capillary membrane also occur followed by the development of edema, emphysema, hemorrhages, and atelectasis due to reduced synthesis and/or destruction of the surface active material (surfactant) in the lung. These effects lead to compromised oxygen transfer from the lung to the blood capillaries and eventually, after some time, to death from suffocation.”

Such is the apparent case with Jawaher Abu Rahmah, who died in a Ramallah hospital, hours after initial exposure, having not responded to treatment.

"One of the main factors influencing the extent of damage caused by CS gas is the amount of particles in the air," said Daniel Argo, an Israeli doctor who regularly takes part in the demonstrations against the separation wall told the news daily Haaretz.

Argo says recent eye and lung injuries, as well as skin diseases, can be associated with the use of CS tear gas, reported the news daily.

"There are other types of tear gas that are not as dangerous as CS; why the defense establishment insists on continuing its use is not clear," Argo said. "In addition, since no studies have been conducted to identify the long-term effects of the gas, security personnel who use it frequently should be worrying about their own health.”

The CS emitted by the tear gas canisters is not the only danger of the canisters. Bassem Abu Rahmah, the brother of Jawaher, was killed when one of the Combined Systems high velocity tear gas canisters struck him in the chest. A report by the Israeli human rights group B'Tselem concerning Bassem’s death found that he was killed by a 40mm tear gas grenade, Model 4431 Powder Barricade Penetrating, CS manufactured by Combined Systems Inc.

According to the company’s website, Model 4431 is in the category of “Indoor Barricade Penetrators.” The canisters are, “Powder and liquid filled, non-burning, spin-stabilized round designed to penetrate intermediate barriers of moderate density such as windows, interior dry wall and interior doors. The projectile breaks upon impact and delivers an agent payload of powder or liquid throughout the target area.” The canisters travel at a velocity of 380 - 425 feet per second.

The primary purpose of these canisters is to penetrate barriers, with a secondary function of releasing a chemical gas. They clearly should not be used for crowd dispersal.

“Soldiers firing extended range tear gas canisters have killed one unarmed Palestinian protester and have injured many others, one of them critically,” Sarit Michaeli, the communications director for B’tselem, the Israeli Information Center for Human Rights in the Occupied Territories, said.

In May 2011, American student Emily Henochowicz lost an eye after being struck in the head with a high velocity canister, while protesting the Israeli attack of the Gaza bound Freedom Flotilla aid convoy. In March 2009, American Tristan Anderson was shot in the head at close range with a metal high-velocity tear gas canister while taking photos following a demonstration in the village of Ni’lin. The shooting caused severe traumatic brain injury, resulting in the removal of his frontal lobe and blindness in his right eye.

Most recently, B'Tselem documented three incidents in November 2010 in which dozens of extended-range teargas grenades were fired at demonstrators in the West Bank village of Nabi Salah.

"After investigation, it appears that the soldiers in question used long-range tear gas canisters to disperse a riot, in contradiction with existing IDF regulations," the army spokesman said in a statement.

"After the incident, the relevant regulations were clarified and the incident was investigated to ensure that this would not happen again."

Responding to the death of Jawaher Abu Rahmah on the first day of the new year, Palestinian Legislative Council official Mustafa Barghouti called on the international community to pressure Israel to stop using tear gas as a means to disperse demonstrations.

Barghouti also called on Palestinians "to document these incidents and these crimes so we can prosecute Israel in international court."