Two anti nuclear campaigners, Andreas Speck (46) from London and Ian Mills (45) from Chippenham, who appeared at Lowestoft Magistrates Court today (4 January) on charges of "failing to leave land" (S69(3)(a) CJPOA 1994) when they blockaded Sizewell nuclear power station in Suffolk on 22 February 2010 [1] walked free after the case was dismissed when the prosecution did not offer any evidence. 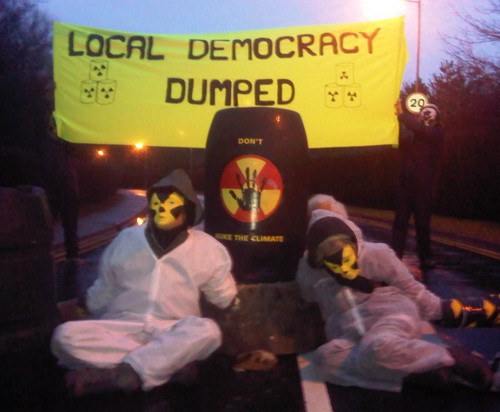 Two anti nuclear campaigners, Andreas Speck (46) from London and Ian Mills (45) from Chippenham, who appeared at Lowestoft Magistrates Court today (4 January) on charges of "failing to leave land" (S69(3)(a) CJPOA 1994) when they blockaded Sizewell nuclear power station in Suffolk on 22 February 2010 [1] walked free after the case was dismissed when the prosecution did not offer any evidence.

The action in February 2010 included several local campaigners, including two of the ‘Sizewell Blockaders’ who where found not guilty of Aggravated Trespass in 2009.

After almost a year, and seven case management hearings, the prosecution applied for an amendment to the charge from S69 (failing to leave land after an order had been given by a senior police officer) to S68 (Aggravated Trespass), because the “wrong charge” was apparently a “computer error”. However, district judge Cooper rejected the change of charge, because it was “not the same misdoing” and “not in the interest of justice”.

After a ten minute adjournment, the prosecution returned and offered no evidence on the charge, so the case was dismissed.

Andreas Speck, a member of Kick Nuclear, the London group of the Stop Nuclear Power Network [2], says: "This outcome is obviously great news for us. But in any case – even a conviction would not have deterred us from taking more nonviolent action at Sizewell or other nuclear power stations, as we did at Hinkley Point in October 2010 [3]. Given the fanaticism of the government in going for new nuclear, nonviolent direct action will be an indispensible part of the repertoire of our resistance."

“In February 2010 we blockaded Sizewell to highlight the end of a flawed government consultation on nuclear. The current government is presently re-consulting in an equally flawed way. Nevertheless, it is still important that we make our voice heard, whether they want to hear it or not. I also urge everyone to respond to the consultation by 24 January, but also to take nonviolent action”, says Ian Mills.

The defendants had been on bail for almost a year.

[1] For information on the action itself, see

[2] The Stop Nuclear Power Network is a UK-based non-hierarchical
grassroots network of groups and individuals campaigning and taking
nonviolent action against nuclear power and its expansion and supporting
sustainable alternatives. See