The Forest of Dean is under imminent threat as once again the Government proposes to put it on the market. The Public Bodies Bill, a far-reaching piece of legislation already in the House of Lords will enable the sale of Forestry Commission land.

Over 3,000 people mobilised on Monday (3rd) to express their dissent and vow to protect one of Britain’s most ancient woodlands and largest oak forest. The crowds marched, belted out songs and burned an effigy of Big Ben to illustrate their view of Westminster. A petition with more than 110,000 signatures is in circulation against the coalition’s future plans for the Forestry Commission.

Check the website for HOOF (Hands Off Our Forest) campaign for more information on preventing the forest sell off and updates.

On the Newswire: Photos of Rally| Interview with campaigners on Dialect Radio 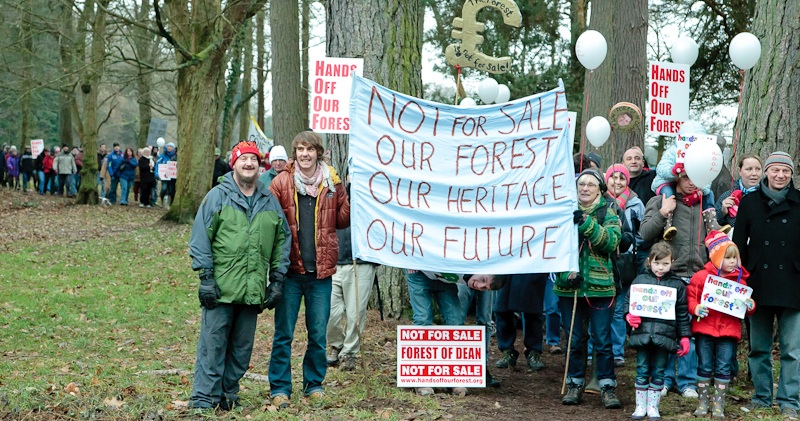 The Forest of Dean is one of thirty crown forests that are scheduled to be emancipated from the Forestry Commission’s evil clutches and delivered into the loving arms of power hungry, profit-seeking developers. According to the Government, the plan is to both cut the overall number of public bodies and make year-on-year savings of £1bn by reducing the cost of ‘bureaucracy’.

Unfortunately its not just gonna be paper cuts this time round. Large chunks of the 650,000 acre Forestry Commission land may be sold to real estate developers and construction companies that will limit access to the forest and hack down as many trees as possible.