The future's orange: nine years later, the regime of kangaroo courts and arbitrary detention without trial at Guantánamo Bay continues...Activists in London turned a small part of Trafalgar Square orange to mark a not very happy birthday at all! 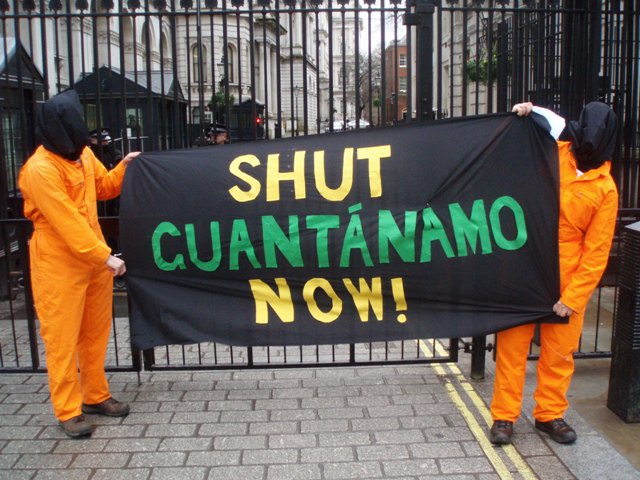 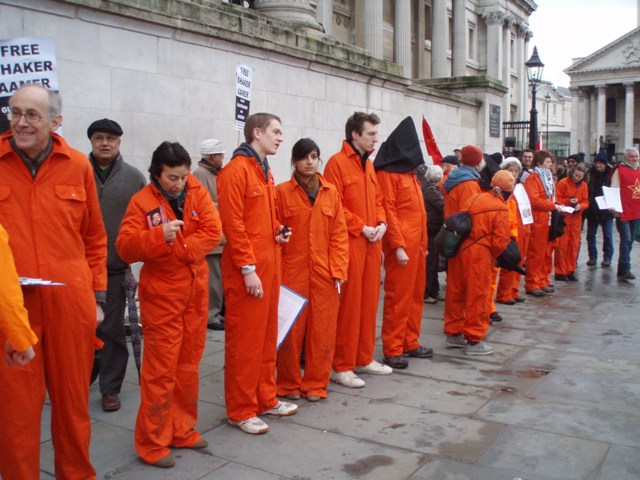 kicking off in Trafalgar Square 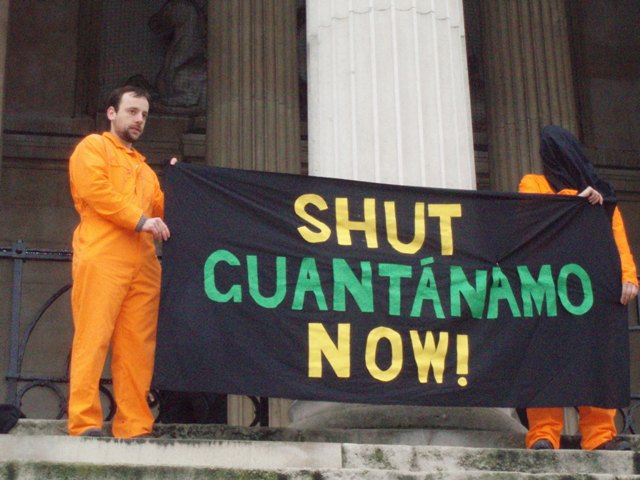 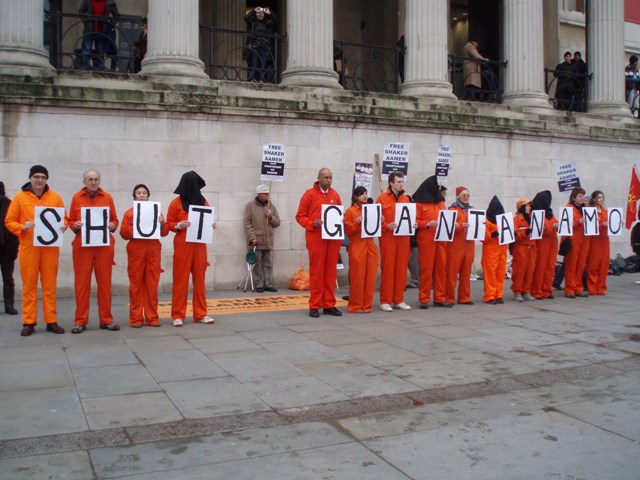 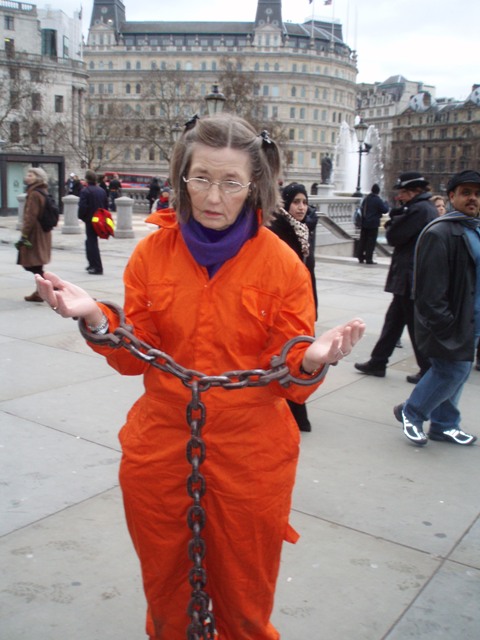 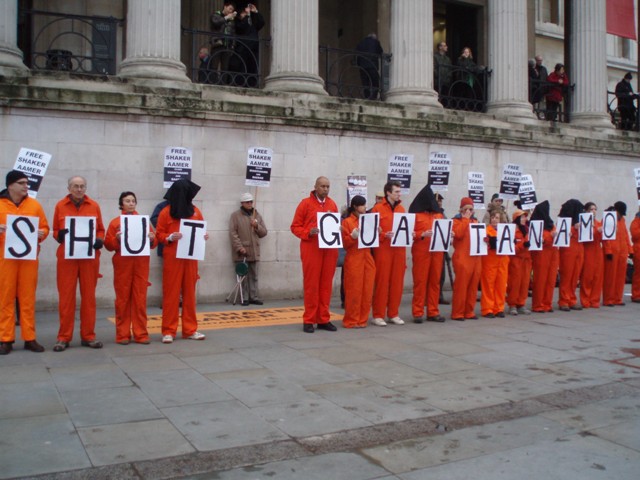 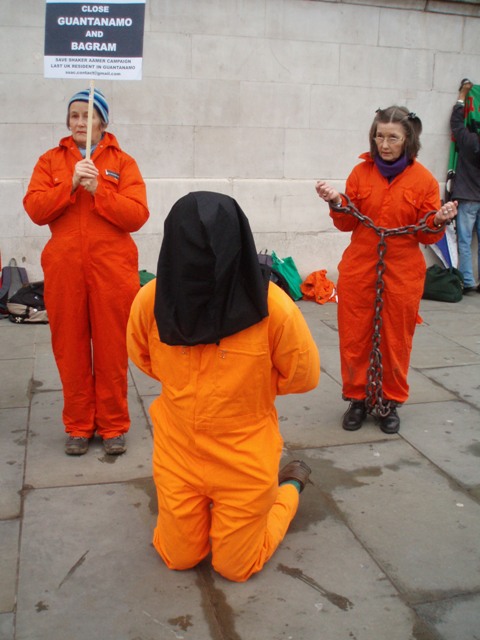 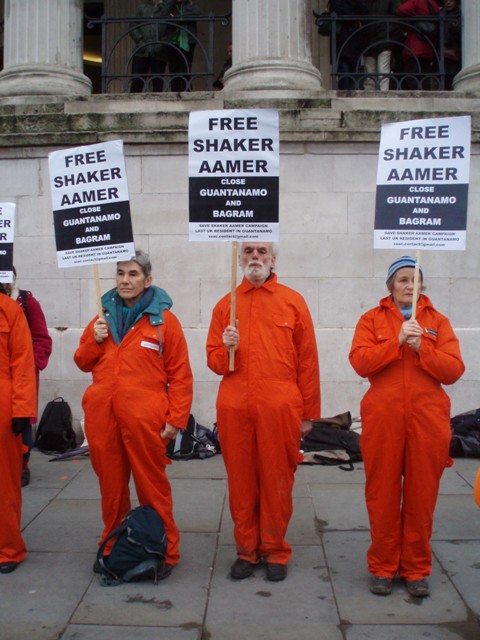 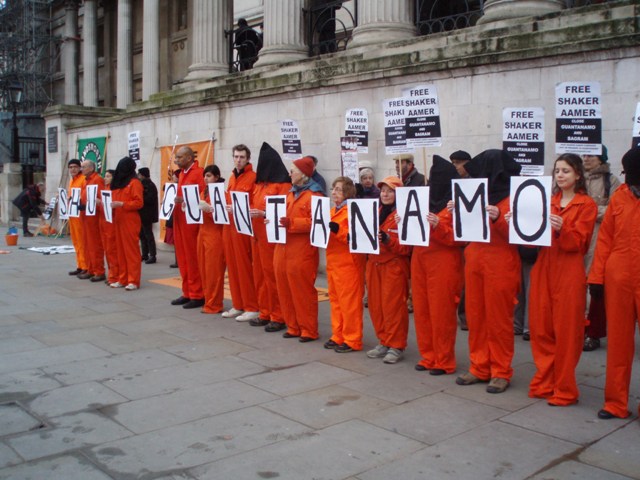 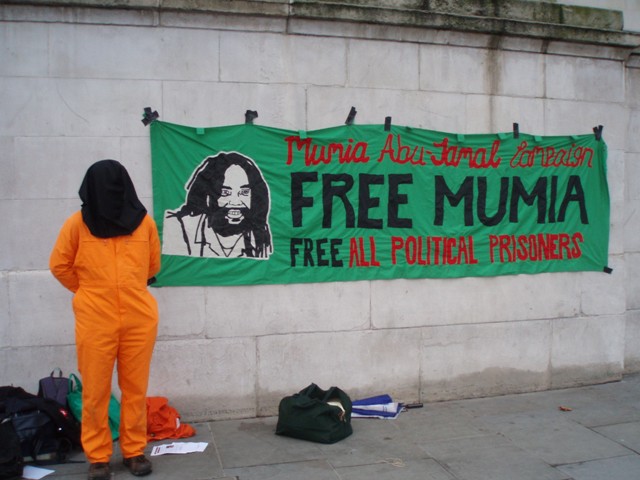 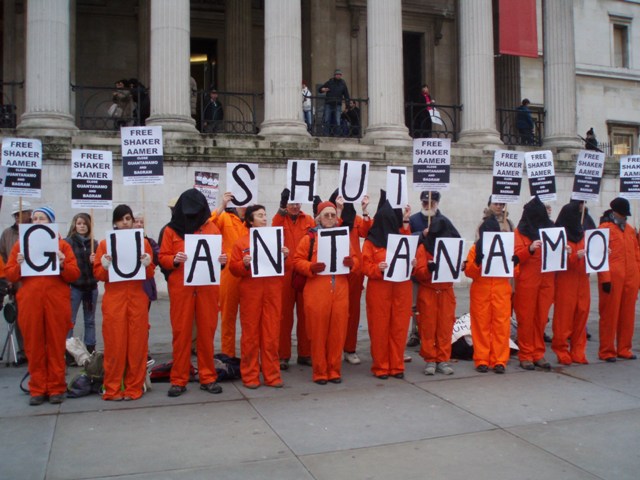 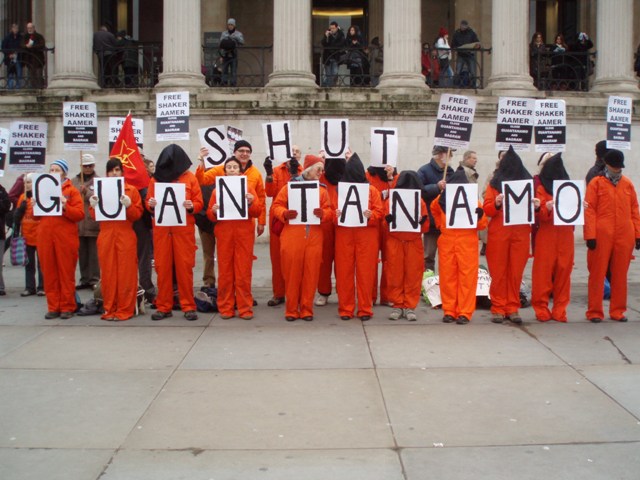 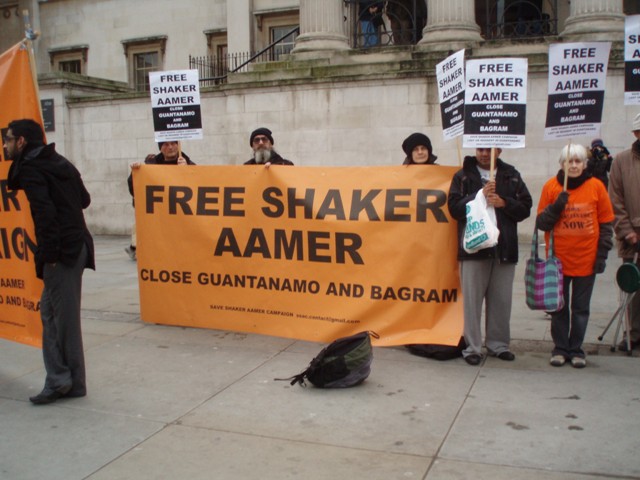 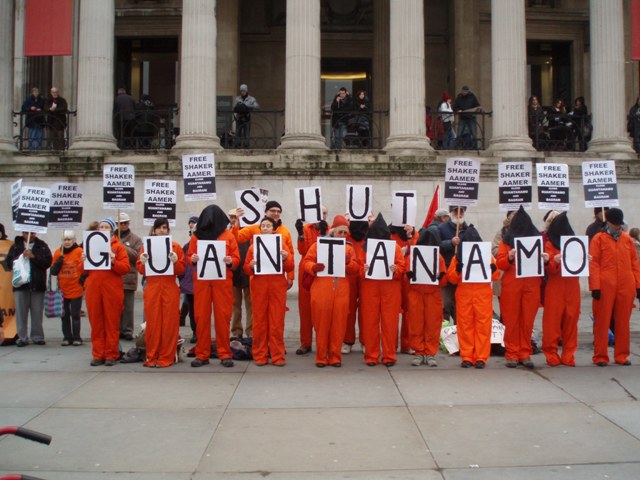 Tuesday 11 January 2011 marked nine years since the opening of the illegal US-run detention and torture camp at Guantánamo Bay. Creeping up on almost a decade of life in its current incarnation, Guantánamo Bay continues to house 173 prisoners and the US government has recently passed legislation to block the transfer and civilian trial of prisoners on the US mainland. Over 90 prisoners of Yemeni origin are prevented from returning home and the US administration is currently planning to introduce measures to perpetuate the illegal regime with the “indefinite detention” of prisoners who cannot be tried or released as they allegedly pose a security risk.

One British resident whose return to the UK was sought by the Brown government in 2007 remains there. Shaker Aamer, a Saudi national with a British family in south London, and a son he has never met, has been held without charge or trial for over nine years. Four other men whose release was sought at the same time have all long since returned to the UK. The Foreign Secretary William Hague and Deputy Prime Minister Nick Clegg recently raised his case with Secretary of State Hillary Clinton.

The day kicked off with the delivery of an open letter to Downing Street with PeaceStrike. The letter, a shorter version of which was published in the Guardian

http://www.guardian.co.uk/world/2011/jan/11/guantanamo-closure-obama-deadline was signed by 75 individuals and representatives of organisations, including MPs Caroline Lucas and John McDonnell, MEPs Baroness Sarah Ludford and Jean Lambert, Kate Hudson (CND), Bruce Kent (Pax Christi) and others and called on David Cameron to intervene personally in Shaker Aamer’s case and to take measures to help the US close Guantánamo Bay.
The full letter and list of signatories can be read at:

http://londonguantanamocampaign.blogspot.com/2011/01/open-letter-to-prime-minister-david.html
Signatures were also collected on the letter at the Beyond Words: Silent Witness to Injustice vigil in Trafalgar Square later that afternoon. Around 200 further signatures were collected from activists, tourists and the public to be sent to the Prime Minister.

Around 70 people then turned the area outside the National Gallery in Trafalgar Square orange for a bright and visual silent protest demanding the closure of Guantánamo Bay at lunchtime (1pm). On a cold and grey afternoon, the National Gallery got a new temporary art installation outside for an hour as protesters coming from as far away as Bradford, Brighton, Worthing and Bedford called on the British and American governments to take immediate action to close Guantánamo Bay. A simple humane and legal plea which has fallen on the deaf ears of the international community for the past nine years was instead made visually, with activists handing out leaflets, collecting signatures on letters, cards and petitions and taking part in a very good-humoured protest to mark yet another very sombre anniversary.

From the top of Trafalgar Square, the future certainly looks very orange and unless governments act now to close Guantánamo Bay, the situation looks set to be perpetuated well beyond its first decade. Saturday 22 January will mark one year since President Obama’s broken promise to close the detention camp, yet no remorse is shown by governments around the world for their complicity in crimes against humanity, all norms of law and the broken lives and continued suffering of hundreds of families, including one in south London.

Some messages of support:
Baroness Sarah Ludford, Liberal Democrat MEP for London [via e-mail]:
“Sarah Ludford stressed that as vice-chair of the European Parliament’s US delegation she will continue to press Washington for the complete closure of Guantanamo, to lobby in London and Brussels for European cooperation in resettlement of men who cannot return to their home countries for fear of torture and in particular to press for her constituent Shaker Aamer to come home to London.”

Dr Shahrar Ali, Green Party, London:
“We’re here in solidarity with those hundreds of people still incarcerated in a pre-Magna Carta medieval state of justice which is no justice at all”.

Val Brown, activist, Bedford:
“I’m here today not only to close Guantánamo but to make everybody aware of the people that are still in there, especially Omar [Khadr] and Shaker [Aamer]. I just think it’s so disgusting that a country can do this to people”.

Noa Kleinman, Amnesty International UK North America Coordinator, Bradford:
“It felt very necessary to come down today although it’s really very depressing that this is the ninth year of Guantánamo and we’re very close to nine years for Shaker Aamer at Guantánamo so I guess we just have to keep on campaigning. We can’t stop”.

Abdul Jaleel Bain, Justice for Aafia Coalition, London:
“I’m here today for the Justice for Aafia Coalition and also to support the campaign for the freeing of Shaker Aamer, and more widely for the closing of Guantánamo Bay prison which is still open despite the fact that President Obama promised to close it one year ago and he hasn’t done that. It’s been a pleasure to come here on what is actually quite a bad day as Guantánamo is still open, there are still people there. The biggest group is a group of Yemenis. There is also Shaker Aamer who is actually from this city. I’m here to show that I’m a Londoner, a British person, a Muslim and representing my organisation. I support the movement to close Guantánamo Bay and I will continue to come here for as long as it takes until that day comes”.

Joy Hurcombe, Brighton Against Guantánamo, Worthing:
“I’m here today to take part in the vigil to shut Guantánamo. People from all of London watched our demonstration and saw and heard that Guantánamo is still not shut. We want Obama to shut Guantánamo now. There are people there who have been there for nearly as long as it’s been open, for nearly nine years and they are being denied all their human rights. They have no access to family, to friends, lawyers, to the outside world and it’s Obama’s disgrace and shame that he has broken his promises. They are there with broken lives and we are here to show the world that Guantánamo must be shut”.

Maria Gallestegui, PeaceStrike, London:
“I’m here to support the London Guantánamo Campaign. It’s a great honour to be here and to share this occasion and basically to send the message out, not just in this country but throughout the world. Talking to tourists, there’s so many people who just do not realise that Guantánamo still exists, it’s still operational and that this so-called war on terror is still being promoted by governments throughout the world and the media throughout the world, so it’s giving the false impression that we need to be terrified in our beds every night for fear of consequences that quite honestly are not realistic and we should be befriending each other and tearing down the walls of hatred and extending the hand of friendship to build a whole new understanding of each other, not built on hatred and fear”.