US-backed Tunisian dictator Zine El Abidine Ben Ali is making concession after concession to a spontaneously created protest movement, in a desperate attempt to cling onto power in the North African country. Solidarity protests have been held in neighbouring Algeria, and support for the Tunisian 'bread intifada' is growing throughout the Arab nations. It seems likely that such demonstrations will spread internationally, amongst equally impoverished populations. 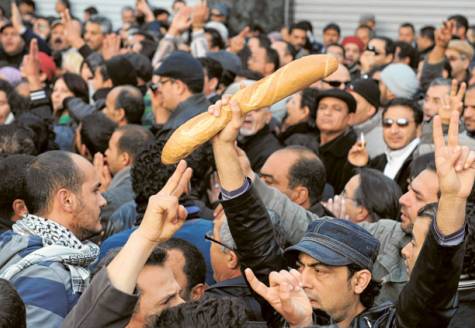 With general strikes and riots gripping major cities over the last week, Ben Ali responded has brutally, and scores have been shot dead by police. When a curfew failed to curb the movement, the dictator started granting concessions. He started by offering to stand down in 2014. He also pledged to create 300,000 jobs, and release many of those arrested in the past days. In the past couple of hours, Ben Ali has dismissed his government, dissolved parliament, and promised elections within six months.

In neighbouring Algeria, the government has reduced the price of oil and sugar by a total of 41%, following rioting there. In Libya, Morocco and Egypt - which has seen no significant action against their regimes over the past few weeks - governments have also taken concessionary measures to ward off 'contagion'.

The Tunisian uprising was touched off a month ago, when Mohamed Bouazizi, a university graduate who worked as a street vendor in Sidi Bouzid, 200km south-west of the capital Tunis, committed suicide by setting himself on fire, after police seizures of his fruit and vegetables. When local youths gathered to protest the incident, cops responded with tear gas and further violence. Waves of revolt have followed, while the Union Generale Tunisienne du Travail - which openly backed Ben Ali until recently - have called general strikes, in a bid to gain control over the movement.

The living conditions facing Tunisia's young working class people were described by rapper The General, in a track released online in the new year. The government then arrested The General last week, before releasing him as part of Ben Ali's partial climbdown. In President, Your People Are Dying, The General described how it's "2011 and there are still those who die of hunger/They want to work for a living but their voice is not heard/Just walk the streets and see, people are becoming monsters/Look at the police men with batons, 'tak tak' [hitting] relentlessly".

Indeed, unemployment is extremely high in Tunisia. Though the official rate is 14%, it is estimated to be twice and high, and even worse for young people. The global economic crisis has also seen the cost of living rise dramatically, with food prices increasing by the largest margin.

Tunisian elections have taken place under strict controls in the past, so it will be interesting to see what shape the next government takes. One thing is for certain, however. Unless the working class organises to take over the running of the economy in its own interests, whoever hold the reins of political power will seek to make inroads into Ben Ali's concessions, and will remain subservient to the United States and France on the international stage.