Officer 'B' revealed as Cardiff based 'Marco' Jacobs

A third undercover police officer has today been revealed by the Guardian. Mark Jacobs, known as 'Marco', operated in Cardiff for four years, infiltrating the Cardiff Anarchist Network (CAN) and other groups including international anti-globalisation networks, No Borders, and the early Climate Camps. 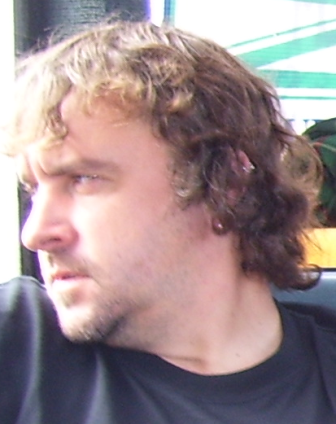 His former girlfriend is reported as saying "I was doing nothing wrong, I was not breaking the law at all. So for him to come along and lie to us and get that deep into our lives was a colossal, colossal betrayal."

Other activists have claimed that as well as disrupting activities and gathering information, he created and nurtured disagreement and division within the group, turning members of the group against each other.

The guy who said about minute-taking - I know these are all things that are good indicators, but EVEN used with a pinch of salt and an assumption that someone is ok until they aren't, these kind of statements really do create an atmosphere of distrust. There are plenty of people who take minutes all the time for all kinds of reasons - some don't like to talk much, some find it helps them be fully acquainted with what's been decided, some feel subservient. None of these people deserve even to have it marked against their name that they take minutes. One thing that really made me happy (in an ironic sense, sure) about these stories is the the constant reporting that these officers were accepted happily into movements. Our movements are getting good references for accessibility and openness. That's something that's always mattered to me. I'd hate to see a culture of distrust fostered as a result of these undercover scum. No matter how much we challenge and distrust there'll always be someone there listening for the pigs, and if not there'll never be certainty in our minds that there isn't someone there listening for the pigs - so while it is worthwhile to unmask a cop, I think we shouldn't get carried away as the actions involved in unmasking cops are very damaging for our movements.

Also ... fucking guardian is claiming to have done all the work ... "PC Mark Kennedy, who was the first officer unmasked by the Guardian". How about unmasked by those closest to him, published on indymedia, spread around activist circles for months and eventually picked up on by the guardian when his involvement led to the collapse of a trial. That's some great unmasking.

Marco attended the Convergence Centre in the KTS (autonomous centre in Freiburg, South-West Germany) in March 2009. Afterwards, he headed to Strasbourg for the protests against the NATO summit. He wrote this mail:

post email addresses of these wankers. We need too check lists and subscriptions. Dont keep this info quiet or you risk others.

Haha, I remember him.

And I remember being suspicious of him too.

Unless I'm completely mistaken, this is a guy who was involved in Dissent Brighton. He always took minutes. Which is something that people should always be wary of (see the book 'Busted', written by an undercover cop working in the a hippy counterculture/drugs/free festivals time). He also regularly displayed anarchist books on the table at meetings - to prove he was reading them.

And went up to Gleneagles to protest against the G8. If I remember correctly, I was surprised to hear that a supposely secret action that he was involved in a few days before the main actions at a diplomatic address was known about before activists turned up....After being involved in Dissent, he had a rather flaky excuse for moving to Cardiff. I seem to remember him being disgusted when told about the proactive actions of antifascists in Poland...

I guess suspicions are sometimes worth having.

Well done CAN and FITWATCH this is an anarchist expose that has nothing to do with Mark shithead Kennedy's big mouth.

any more pictures that we can send to france and germany where we know he operated. though fuck me they are going to think were full of filth.

but I think that this (or a version) should be central column because it is an an expose that has come from the movement not the media and their lapdogs. It is coming clearly from Fitwatch and CAN

It would also give UKIMC the chance to collate the numerous infiltrator threads that have been on the newswire in the last few days. Important considering those of us here have been source of the stories.

PS Indy mods you are doing an amazing job in fucking hard times!!!!!!!!

What do you mean by "Greek" number? Does he have anything to do with Greece?! If so, it will be important to know I think.

Dear Marco, hope all is well/you're not a cop.

It was reported in yesterday's Guardian that Marco left Cardiff in 2009, saying that he had gained employment as a gardener in Corfu.He stayed in contact by email/text and postcard for about a month and then was not heard from or seen again.

I think its worth pointing out that for the majority of the time that he was in cardiff people always had doubts about him (which were passed on from brighton)...he was never fully trusted and was excluded from many action plannings... it wasn't that everyone thought he was a cop but enough people did to ensure that he was not in the know about many things...it was rather his shit stirring within the group(s) that was the real issue.

much love to all the people most affected by this was one, hope it hasn't opened old wounds.

also, a note of caution: the guardian article doesn't mentioned any specific proof/confirmation (though other explanations seem quite far fetched).

one of the problem with many of the indicators is that they could also indicate that they are on the case, new, enthusiastic etc. there were suspicions about, even as i understand it, mark stone, early on - (but he had a documented and seemingly provable history to counter it) and indeed with marco, but it is rare that a confession or other such undisputable proof is discovered... we face a choice between becoming closed groups and shrinking into insignificance or continuing to operate openly and risk what has happened again. a tough choice.

"they will think we're full of filth"
:)

one could tell so, but nevermind, england has taken first steps in inner security, surveillance, control, i am rather not surprised that the stone starts to roll over there.
although, it's not that we have less problems over here, just we doon't get along to them/can't find proves.

i write from france where we organised dissent meetings against the nato summit in 2009, both of them, mark and marco, have been there.
with marco we had far more contact, he asked a lot of questions and had a sympthatic contact with people, most of us as group at last.
mark on the other side did act much more "shy" or descret.
fact is, i was wondering about this caml english guy, but not at all about marco.
i got suspicious later on with the creation of a webbog for the mobilisation, which seemed like a "one man show" without any content, but possibilities to get in touch.

now i would like to know following:
* who is the 2nd one ? 1 mark, 3rd marco, who's in the middle ?
* were there also "real" people from england in france at this meeting ?
* mark contacted us for a recent meeting in november in france, some days later he got busted, are there actually "real" people coming to france ?

there are quiet a lot of questions i got, but the most interesting for me is to get in touch with people who made experience with infiltrations, confrontations etc.
we actually prepare for the g8 g 20 stuff in france and to be frank: we don't know with who we actually build the resistance !
sure, calling for a counter summit action is like calling for international cops,
but i would still like to know:
for who do they gain infos ?
for england ( or whereever they get paid )
for the country they visit ?
for europe ?

if you have any infos more than already published, please send it to

So sorry to everyone affected by this charming, manipulative and abusive bastard. Well done to CAN and FIT Watch.

Could further photos please be posted- ideally the one used in the Guardian but un-pixilated, if possible.

"Marco" has a wife and kid

for our statement on this story.