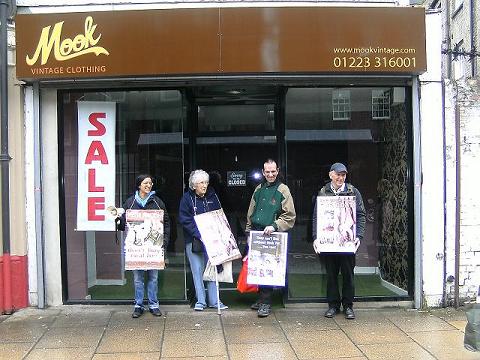 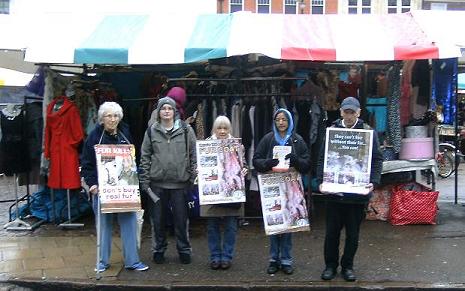 ...On to Dixie's Vintage Stall

Mook Vintage in Cambridge (that had been selling real fur items) appears to have Closed Down leaving their empty shop and closing down their own facebook fan page! Campaigners are cautiously optimistic that this is the last they will see of this dubious outfit. However activists will be monitoring developments to insure if the business re-opens in Cambridge it will be the target of continued protest.

Protesters yesterday moved on to the market stall, Dixie's Vintage, in the city centre which is believed to be the last retailer in the city to sell any real fur items.

Protesters explained politely why they were their and began handing out leaflets. Two police arrived and one officer began ordering the activists move across the road, trying to insist on an activists details and trying to grab an activists camera, telling him to stop filming – but the officer was to be disappointed as campaigners declined his unlawful orders! The officer, realising the protesters were legally clued up, backed down totally! The other officer on the scene stood watching his colleague's ridiculous shenanigans in embarrassment.
(See video:

Members of the public took leaflets and showed their support and student journalists from Anglia Ruskin University came by an interviewed activists for student radio. Hardly any sales were made at Dixie's Vintage stall as the public hurried by not wanting to associate with fur sellers.

This stall may be the last step before all Cambridge City retailers are fur free! The campaign will continue until Dixie's Vintage stall drops fur for good.