The first bombing raid of the Gulf War was launched on Iraq 20 years ago. In Wrexham, members of Wrexham Peace & Justice Forum and supporters organised a stall in the town centre on Saturday with a display of information about the effects of war and sanctions on Iraqi children over the last 20 years. 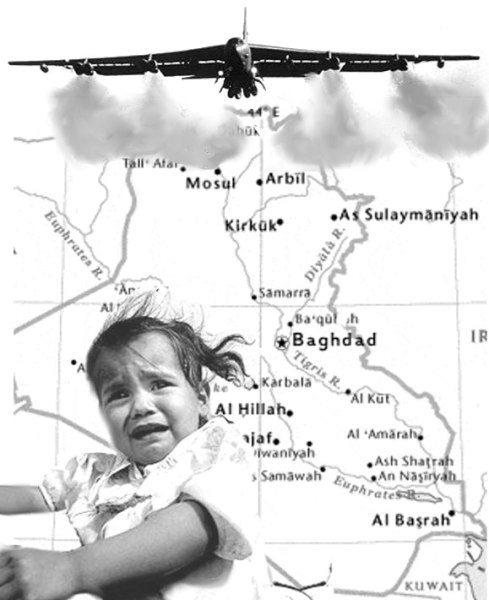 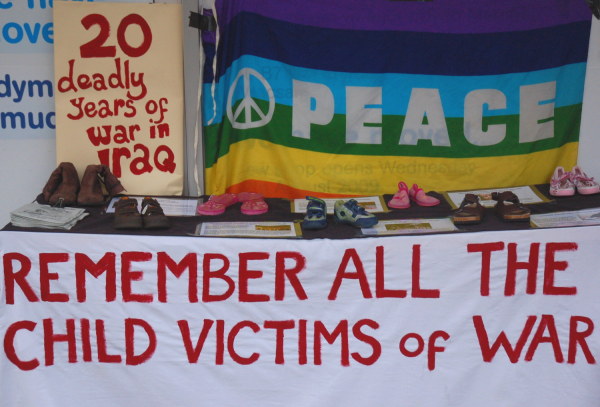 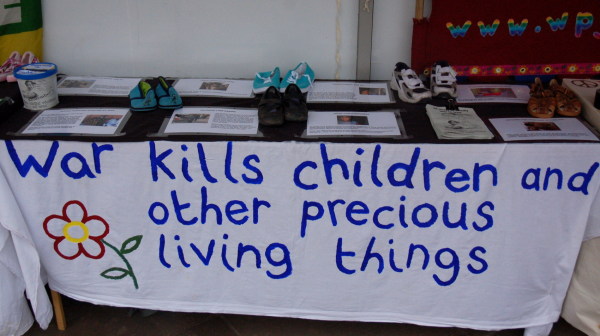 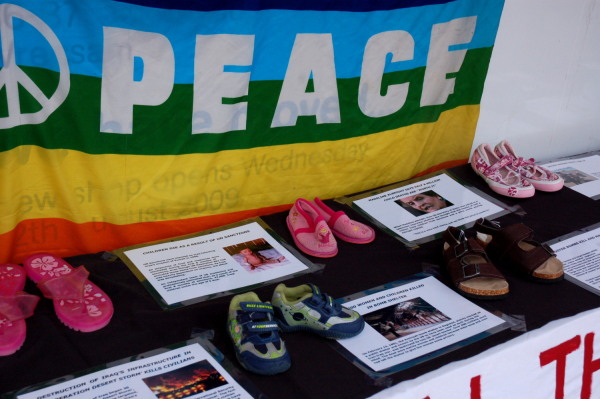 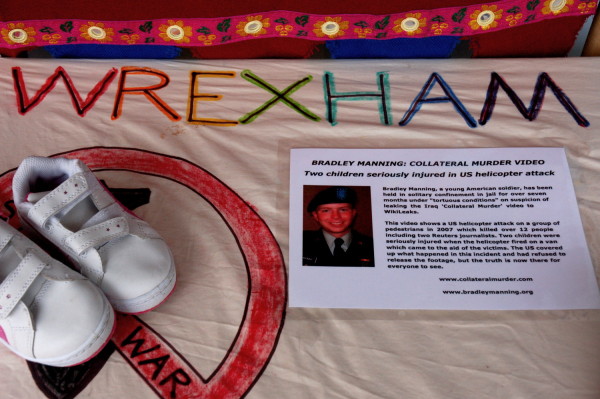 STALL AND DISPLAY OF CHILDREN'S SHOES

Children's shoes were displayed alongside the information, to remind us of all the lost children of Iraq. Well over a million Iraqi children have died either as a direct result of warfare or indirectly, following the destruction of infrastructure and vital services in targeted bombing raids, through punitive UN sanctions and the deadly legacy of depleted uranium weaponry for example. Millions more have been injured, maimed or traumatised.

The stall and leaflets included information about Bradley Manning, who has been held in solitary confinement in a US military prison for over seven months in conditions which amount to torture, even though he has yet to be tried or convicted of any offence. Bradley Manning is suspected of leaking the 'Collateral Murder' video (released through WikiLeaks) which shows a US helicopter attack in Iraq in 2007 that killed over 12 people including two Reuters journalists. Two children were seriously injured when a van used to go to the victims' aid was also attacked, the soldiers laughing as they fired. The truth about this incident was covered up by the US military.

Manning is being held in tortuous conditions which are banned under US law, punished before he's been tried for allegedly revealing something that should never have been suppressed in the first place. Campaigners around the world are using this anniversary to call for his release and for his proper and humane treatment while in custody. Bradley Manning's mother is Welsh and he spent three years here in his teens, attending a high school in South Wales.

EXTRACT FROM LEAFLET DISTRIBUTED AT THE STALL

20 YEARS OF DEADLY WAR AND CHILD SUFFERING IN IRAQ

The first bombing raid of the Gulf War was launched on Iraq 20 years ago, on January 15, the birthday of peacemaker Martin Luther King Jr. The attack was cynically timed to coincide with US prime-time TV news. To mark this anniversary, vigils are being held in the US, the UK and around the world.

By January 1991, Iraqis had already been suffering months of punishing sanctions. These were estimated to have killed 47,000 children under the age of 5 in the first 8 months alone. Millions more babies and children became malnourished and did not receive proper medical care because food and medical supplies were not allowed into Iraq even though these items were expressly excluded from the sanctions. The results were nothing short of catastrophic for the Iraqi people.

On New Year's Day 1991, two weeks before the bombing began, four anti-war activists entered Griffiss Air Force Base in New York and disabled a B52 bomber, putting it out of action for the duration of the Gulf War. Remanded in custody pending trial and watching the war unfold on the jail TV set, one of them wrote:

"From the outset, the military conflict has been presented as a Nintendo Game, free of serious consequence. Forty-four thousand bombing missions flown with no casualties shown, very cynical, very slick, very marketable. As death and destruction is reduced to blips on a video screen, dialogue is reduced to a discussion of technique: "how we will win?" rather than "why are we there?" The conflict is stripped of history, politics, economics with pivotal issues ignored and forgotten... Who armed Saddam Hussein? Who supported him, in the eight year war with Iran? Who created Kuwait and why? Does anyone remember the Shah?" [Ciaron O'Reilly, 1991]

The 'official' TV presentation of the war was very far from the truth. Tens of thousands were killed during the bombing but the real mass killing of civilians was still 'work in progress', as a planned longer term result of the 'precision warfare' which had decimated Iraq's infrastructure. Power production, food production, transportation, healthcare, education, water treatment and sewerage were all effectively put out of action, a tactic which has been described as 'bomb now, die later'. Without their life sustaining infrastructure and with ongoing crippling sanctions, Iraqi civilians were simply left to die of disease and malnutrition. Children, especially babies, were the most vulnerable.

Sanctions remained in place in the years between 1991 and the invasion and occupation of Iraq in 2003. Although measures such as the Oil-for-Food programme were introduced to reduce the suffering of the civilian population and silence mounting criticism of the sanctions, these are widely considered to have failed miserably. High ranking UN officials resigned in protest. A UNICEF report found that between 1991 and 1998 half a million babies and children under 5 died in Iraq over and above the expected death rate.

Extensive use of depleted uranium weaponry in the southern battlefields around Basra turned the Gulf War into a nuclear war, with levels of cancers and birth defects in the area now comparable with those seen in the aftermath of the bombing of Hiroshima in 1945. The cocktail of poisons rained on Fallujah by the US-led coalition in 2004 has led to a similar situation there, with high numbers of spontaneous abortions, nearly a quarter of all babies dying in the first seven days after birth and three-quarters of these having visible deformities.

The 2003 US- and UK-led invasion of Iraq brought an end to UN sanctions, small comfort given the death and destruction visited on the long-suffering Iraqi people in Operation Iraqi Liberation, which was hastily renamed Operation Iraqi Freedom after critics made the obvious connection between the initials of the original name and the real reason for the war. A few days after the 2003 bombing started, UK reporter Robert Fisk wrote about how child victims of war were being exploited as emotive news stories for the West: 'There is something sick, obscene about these hospital visits. We bomb. They suffer. Then we turn up and take pictures of their wounded children.'

Since 2003, it is estimated that well over a million more Iraqi civilians have died, many of these killed by the 'liberating' coalition forces or caught up in the violence which has spiralled with the deteriorating security situation. Many children have been killed or maimed by the vast numbers of unexploded cluster 'bomblets' which litter the land. Whole families have been killed in bombing raids allegedly targeting militants. 5 million Iraqi children have now lost at least one parent. Half a million children are homeless and living on the streets. 4 million Iraqis have been internally displaced or have sought refuge outside Iraq. There are continuing shortages of food, clean water, medicines and other essentials. The security situation continues to pose a threat to all.